His Church. Our Experience.
Subscribe
HomeFeaturesHow Our Lady of Guadalupe became the ‘backbone’ of the Mexican people
FeaturesThe Catholic FaithSaints 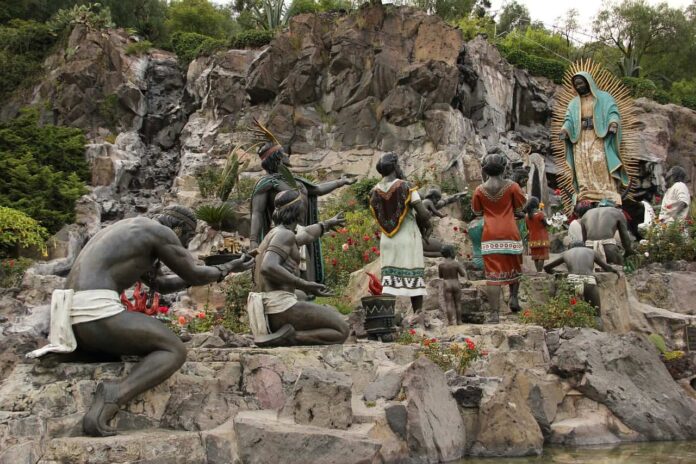 Over 20 million people set foot on Tepeyac hill every year to witness the living miracle of the woman clothed with the sun and the stars, the woman who changed the course of history by leaving her image miraculously imprinted on the cloak of an indigenous man in 1531. With her apparition, the Virgin of Guadalupe became the hope and anchor of the rising Mexican nation and the whole American continent, a reality that is still visible in the fervent devotion with which she is celebrated today.

In dialogue with Dr. Arturo Rocha, Secretary of Colegio de Estudios Guadalupanos (College for Guadalupan Studies) in Mexico City, philosopher and instructor of a course on the “Guadalupan Event” in partnership with Denver’s Centro San Juan Diego, we set out to understand how the miraculous event of the Virgin Mary’s apparition influenced the culture and identity of the rising Mexican nation.

Dr. Rocha referenced some Mexican authors who have identified the role of Our Lady of Guadalupe in forming a “Mexican identity.”

One of them, the poet Ramón López Velarde, wrote in 1920 that one day, “with merely Mexican eyes,” he sat inside the Basilica of Our Lady of Guadalupe, where, upon observing the devotion of people of all ages and professions, he became convinced that “the backbone of this country is ‘Guadalupan.’”

Virgin Mary, pillar of the country

Nonetheless, in order to understand how the Virgin Mary became the backbone of the country of Mexico and a sign of identity, Dr. Rocha explained that it was her apparition as a mestiza (woman of mixed race), the sign of hope she provided as Mother and her words that would bring unity to a divided land and people, that had a significant impact.

“[Our Lady of Guadalupe] embodies, in her mestizo complexion, the races (Indigenous and Spanish) that gave rise to Mexican identity, races that at first could not tolerate, neither one nor the other, the new people that had been born orphan in the same land: the mestizo people,” Dr. Rocha said.

“[She] synthesizes the two people that gave rise to the Latin-American nations… Mary of Guadalupe, not entirely through her own merit but through the merit of the One whose heart beats in her womb, gives also to this mixed people… her compassionate gaze, her shadow and her shelter,” Dr. Rocha said.

There I will listen to your cry, your sadness, to alleviate, to cure all of your hurts, your miseries, your sufferings.”

The Virgin of Guadalupe’s apparition as a “Mother of Mercy” to the mestizo people and her promised protection over them and those who lived in that land would also contribute to a sense of identity that would manifest itself in the war of independence in 1810, Dr. Rocha said.

She gave St. Juan Diego her loving promise of motherly intercession and protection for the people and asked for a temple to be built on Tepeyac hill: “There I will listen to your cry, your sadness, to alleviate, to cure all of your hurts, your miseries, your sufferings. And to accomplish what my compassionate gaze seeks, go to the palace of the Bishop of Mexico, and you will tell him that I have sent you, so that you may show him how much I desire that he provide a house for me here.”

Furthermore, in her apparition as a Mother of Mercy for the people of that land, Dr. Rocha affirmed that “perhaps from the lips of the Virgin Mary rises the first affirmation of Mexican identity in the history of our nation, in a moment in which Mexico… did not even exist as such.”

The Virgin declared herself as the Mother of Mercy “of all who live together in this land.” When examined in náhuatl, the native language of St. Juan Diego and the language in which the Virgin spoke to him, the phrase takes on the meaning of “living together in ‘family,’” in “one house.”

“Perhaps this is why Carlos de Singüeza y Góngora, in 1680, already affirmed that Guadalupe was ‘our most given patriot.’ There is no better instance to talk about a ‘Mother Country,’ for Mary, at Tepeyac, speaks of an intimate unity and domestic sonship: The nation is the common house,” Dr. Rocha said.

Perhaps from the lips of the Virgin Mary rises the first affirmation of Mexican identity in the history of our nation, in a moment in which Mexico… did not even exist as such.”

Already in 1737, the Virgin of Guadalupe had been proclaimed Patroness of the New Spain, some 70 years before Mexico emerged as an independent nation.

“Moreover, during the war of independence, the Virgin of Guadalupe embodied the ideals and values of the ‘criollismo’ (the Spaniards born in New Spain), but also, evidently, of the mestizo nation — all in opposition to the ‘peninsulars’ (the Spaniards born in Europe) and of the ‘realists,’ who opposed the insurgents [and] instead identified themselves with Our Lady of Remedies,” Dr. Rocha explained.

The Guadalupan miracle was of such importance to the mestizo nation that today many still hold a fervent devotion to Our Lady of Guadalupe, even if they are no longer practicing Catholics.

“The loving maternity of Mary of Guadalupe makes some faithful forget about the Resurrected One, and this is something worth remedying, since she is a safe path… but to get to Christ,” Dr. Rocha pointed out.

He sees in this attitude a characteristic of Latin-American peoples to be greatly affectionate toward the motherly figure, an aspect also visible in the indigenous people of ancient Mexico.

“It is something very hard to understand from Western European reasoning, and even less from a protestant realm. But in Latin America, this maternal presence is very important, and it has a clear expression in the devotion to Mary, the Mother of God,” the professor said. “Nonetheless, this maternal omnipresence in the core of the piety of Latin-American people should not bypass other aspects of the practice of the Catholic faith.”

Although the Virgin Mary chose to reveal herself as the Mother of Mercy of those who lived together in that chosen land, “the Guadalupan event transcends the Mexican nation,” Dr. Rocha assured, echoing St. John Paul II’s words. The Patroness of the American continent is not only the Mother of all the Latin-American people, but the Mother of all men and women.

Indeed, if the message of Our Lady of Guadalupe is Catholic… then it is universal and communicates something to men and women from the whole world.”

“Indeed, if the message of Our Lady of Guadalupe is Catholic (not through her own merit but through the merit of the One whose heart beats in her virginal womb), then it is universal and communicates something to men and women from the whole world,” Dr Rocha said.

Specifically, the professor sees in the Guadalupan event an example of “a perfectly enculturated evangelization.” She is the “star of the first and new evangelization.

“The Virgin of Guadalupe… is the perfect example of this evangelization, new in its expression and its methods, methods that are effectively persuasive, that are made new every day, while remaining rooted in the immemorial tradition,” Dr. Rocha concluded. “The reach of this renewal is universal, Catholic in the fullest sense.”

Vladimir Mauricio-Perez
Vladimir is the editor of El Pueblo Católico and a contributing writer for Denver Catholic.
RELATED ARTICLES
Events