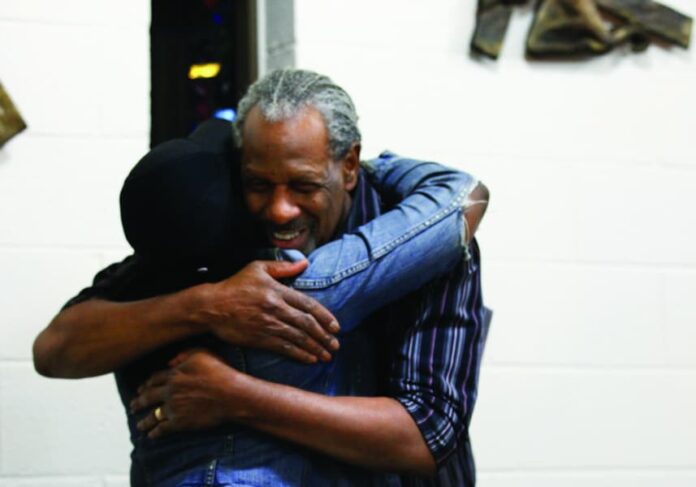 While speaking about hope at a recent prayer vigil held by Cure d’Ars parish, local African Episcopal Minister Rev. Tawana Davis quoted St. Augustine of Hippo, who said this: “Hope has two beautiful daughters: anger and courage. Anger at the way things are, and courage to see that they do not remain as they are.”

On Aug. 4, Cure d’Ars held a special prayer vigil for peace, not only for an end to violence in the Park Hill neighborhood in which they are located, but also for an end to the violence that has been occurring in the nation and around the world, from Baton Rouge to Syria, South Carolina to Iraq.

“Peace is at the heart of Jesus’ Gospel,” said Cure d’Ars pastor Father Simon Kalonga. “Peace and justice, that’s what the Lord likes. So we turn to him tonight, praying for peace, peace in our neigh or hoods, peace in our nation, and peace throughout the world. It is important to turn to the Lord in our time of need, so let us open our minds, our hearts, our ears and our eyes to receive God’s gifts of peace and justice.

During the vigil, parishioners and leaders from Cure d’Ars and the surrounding community expressed their desire for things to change. The parish has been working with other local churches over the past year to form a strong spiritual front against the violence occurring in their collective neighborhoods. One church they’ve been working closely with is Shorter African Methodist Episcopal Church and Rev. Davis. She attended the prayer vigil and delivered a moving message for those who were there.

“Your mere presence here today gives me hope, a hope that is built on nothing less than Jesus’ blood and righteousness,” she said. “As St. Augustine said, hope has two daughters: anger and courage. Anger at the way things are, but the courage to make sure they don’t remain that way. Do not lose your hope. Stay in prayer, keep the faith, and know that things will change.”

“If we truly believe that we serve a God who can do all things and is all things and is everywhere, then we have to believe that we can transform these communities just with our mere presence,” Davis said. “When we are present, that means the spirit of the Lord is present, and if the spirit of the Lord is present, that means that things can and will change.”

As St. Augustine said, hope has two daughters: anger and courage. Anger at the way things are, but the courage to make sure they don’t remain that way. Do not lose your hope. Stay in prayer, keep the faith, and know that things will change.”

One Cure d’Ars parishioner, Skeet Johnson, is a former Colorado State public defender of 23 years. Last year, he met Davis and became involved in an ecumenical group of leaders and members from several different local churches facilitated by her to embark on prayer walks throughout the local community. The walks were organized in response to the overwhelming amount of violence that occurred over the summer in Park Hill neighborhood and the surrounding areas.

Not one to simply sit still and do nothing, Johnson believes that Catholics are called by Christ to leave the walls of their churches and be among those who are suffering.

“Being able to share that Christian love that you say you got, rather than keeping it inside of you or inside those walls is what this is about,” he said. “Taking the risk that the Master took; he was no wimp. He was someone who was out there, doing it.”

Another parishioner, Minnie Cassel, shared how she has been living in Park Hill for 31 years and has experienced countless shootings, including some right outside of her bedroom window. She also lost one of her daughters to violence in 2007. In spite of what she has seen happen in her neighborhood, she refuses to move.