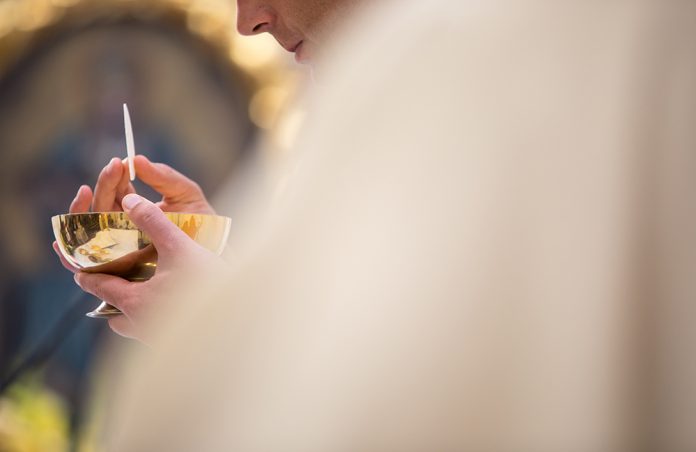 Jesus was known for speaking directly and remaining close to sinners. He told the adulterous woman, “Go, and from now on do not sin anymore” (Jn 8:11), fully aware of the depth of the sins she had committed. To the rich young man who was a close follower of the Commandments, he issued a challenge to deeper holiness: “go, sell your possessions, and give the money to the poor, and you will have treasure in heaven; then come, follow me” (Mt 19:21).

His direct truthfulness was challenging, and to some it was so threatening that they plotted against Jesus and eventually killed him. With the world awash in competing voices and narratives about the truth, we could use more of this gift, especially when it comes to receiving the most important sacrament, the Holy Eucharist.

Those who follow the news about the Church know that the U.S. Bishops will discuss a draft document on Eucharistic coherence at our November 2021 meeting in Baltimore. The debate about the document is centered around the questions: What is the best way to encourage greater belief in Jesus’ true presence in the Blessed Sacrament? And flowing from his true presence, how should bishops and pastors best work to win back the souls of Catholic public figures who have failed to act in accord with the Gospel?

These two questions are related. A hands-off attitude with those who publicly defy the Church’s teachings causes scandal and weakens belief in the true presence of Christ in the Eucharist. The term scandal has a technical meaning here. It means to lead others into committing sin.

Indeed, such an attitude could lead faithful Catholics to doubt about Jesus’ real presence in the Eucharist and could even call into question how deeply their bishops believe in it. If Jesus is truly present in the Eucharist and we do nothing when Christ is received by those who publicly and willfully flaunt his teachings, all while professing to be devout Catholics, then doubts can emerge in the hearts of the faithful. Doubts like: Do we genuinely believe Jesus is present in the Eucharist? Is the Eucharist something we can approach while in a state of serious sin? Or, if the bishops do not teach about the proper disposition to receive the Eucharist, does how one receives Jesus really matter?

As shepherds of the faithful entrusted to us, we bishops need to consider the salvation of both the person in the pew and those who are public figures. We recognize that all of us are sinners, yet we need to encourage repentance in all who have strayed from faithfulness to Jesus Christ and the Gospel and do our best to prevent more people from doing so. This duty requires clear and honest communication, integrity and love. In other words, it requires the approach that Jesus used throughout his ministry.

Pope Francis recently employed this method when he was asked by the press about giving Communion to Catholic public figures who vote or act in other ways to promote abortion. He responded: “Abortion is more than an issue. Abortion is murder. … Scientifically it’s a human life. The textbooks teach us that. But is it right to take it [a child] out to solve a problem? And this is why the Church is so strict on this issue because it is kind of like accepting this is accepting daily murder,” he said.

The Holy Father also pointed out that those who promote abortion place themselves outside of the community of the Church and that this presents a dilemma for pastors. “What should the pastor do? Be a shepherd, do not go around condemning … but be a pastor. But is he also a pastor of the excommunicated? Yes, he is the pastor and … he must be a shepherd with God’s style. And God’s style is closeness, compassion, and tenderness.” God is all these things, and he is truth itself.

The Pope summarized God’s approach by saying that Catholics who promote grave evil are outside of the Church community and cannot receive Communion, while also underscoring that they should not be abandoned but sought out. They must understand that one day they will stand before God alone and be judged as to their faithfulness to Jesus Christ and all that he has taught. While Jesus is indifferent as to what political party one belongs to, he is not indifferent to the message of the Gospel, the proclamation of the Kingdom of God, or to whether one seeks only the will of the Father. Instead, he gives numerous warnings that hell is real and a possibility for those who are not faithful.

Please pray for the bishops, that we seek to follow this path of truth and charity. Let us ask for a renewal of the gift of faith so that in the face of difficulty we can respond with St. Peter after he had heard Jesus’ teaching on the Eucharist. “Master, to whom shall we go? You have the words of eternal life. We have come to believe and are convinced that you are the Holy One of God” (Jn 6:68-69).

Share
Facebook
Twitter
Linkedin
Pinterest
Email
Print
Previous articleArchbishop Aquila condemns anti-religious and hateful vandalism in northern Colorado; prays for healing and God’s love to be known
Next articleJesus may not ‘need’ our adoration, but he asked for it