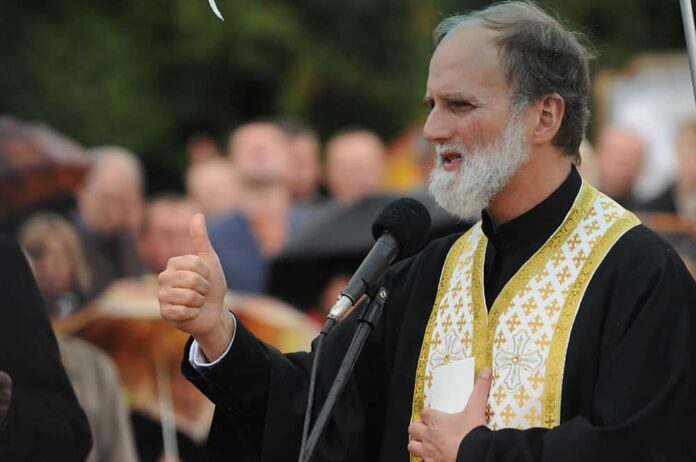 In the mid-1980s, my wife and I were invited to a baptism and to the post-christening reception at the home of the newborn’s parents. During the latter festivities, I was introduced to a young man who was working on a doctorate in Church history at Harvard. We fell into conversation and after 20 minutes or so I had had one of those rare experiences that are so precious in life: I knew, instinctively, that Borys Gudziak and I were going to be close friends for a very long time.

I had no idea, then, what a singular life Borys had already lived, nor what drama the future held in store for him. The son of Ukrainian immigrants who had come to America after World War II to escape communist persecution in their homeland, he had grown up in Syracuse, New York, thinking himself a future star in the National Basketball Association. After recognizing that slightly built, six-foot tall Ukrainian-Americans were not avidly sought by NBA teams, he adjusted his career plans and undertook both an advanced degree in history and a theological education. The latter came, in part, by personal instruction in Rome from the great Cardinal Josyf Slipyj, the exiled leader of the Ukrainian Greek Catholic Church [UGCC], who had been pried out of the Gulag by Pope John XXIII — and who was the model for the “pope from the East” in Morris West’s novel, The Shoes of the Fisherman.

Slipyj was the successor of the even greater Metropolitan Andrey Sheptytsky (d. 1944), one of the singular figures of 20th-century Catholicism (and a man whose beatification is long overdue). Sheptytsky’s dreams for the future of Ukrainian Greek Catholicism included the creation of a great university. That university now exists, in L’viv in western Ukraine, and is widely recognized as the finest center of higher learning in the country. The development of the Ukrainian Catholic University is one of Catholicism’s great accomplishments of recent decades. And the university exists, and thrives, because of the extraordinary work of its first rector, Father Borys Gudziak (ordained a priest in 1998), who gathered around him a host of first-class scholars and teachers, some of whom were veterans of the Soviet prison camp system.

In 2012, Father Gudziak was ordained a bishop and given responsibility for the Ukrainian Greek Catholics of France, Belgium, the Netherlands, Luxembourg, and Switzerland. As with the university in L’viv, he had to start from scratch: few clergy, few churches, no money, inadequate records. But with his remarkable capacity for work, which is driven by a deep faith and nourished by prayer, he rebuilt the life of the Ukrainian Greek Catholic Church in western Europe — now composed primarily of undocumented immigrants — and set in place the foundations for its future growth. And Bishop Gudziak did all this from his base in Paris while maintaining a major role at the Ukrainian Catholic University and serving as a kind of “foreign minister” for the Greek Catholic Church in Ukraine as the country was invaded by Russian forces after the Maidan revolution of dignity in 2013-14.

So while he may not have developed Steph Curry’s lethal long-range jump shot, Borys Gudziak’s extraordinary ministry has displayed some of that NBA superstar’s graceful talent, electric energy, and ability to make everyone around him do (and be) better.

On February 18, it was announced that Pope Francis had accepted the nomination of the Synod of the UGCC and was naming Bishop Gudziak the head of the Greek Catholic Archeparchy of Philadelphia. Something of the quality of the man can be gleaned from an interview Archbishop-Elect Gudziak released that day:

“As I — hopefully — mature as a human being, I am increasingly drawn by the mystery of our God in Three Persons. This may be daring, but I want to be in the presence of the Father, Son and Holy Spirit… My central belief is that the Son came into this breathtaking yet often frail human race to be with me and you, even in death, to bring us home to the Father.…I feel the protection of the Mother of God and the solidarity of the communion of saints, especially the martyrs. Life in the Lord, who served and suffered, invites me to suffer with and serve gladly those to whom I am called….”

Welcome home, my friend. We are blessed to have you back among us.