In the heart of the Auraria Campus in downtown Denver is St. Elizabeth of Hungary, one of the city’s most iconic churches. It is not uncommon to see believers and non-believers in the parish due to all of its remarkable characteristics, starting with its unique location.

Established in 1878, St. Elizabeth is one of the more unique long-standing historic churches in Denver. The beautiful exterior and unique architecture are what draw people in. Its 162-foot bell tower is what dominates the Auraria neighborhood. However, besides its beauty, what really stands out at St. Elizabeth are the ministries that reach out to the less fortunate.

The sandwich line is one of the largest and oldest ministries at St. Elizabeth of Hungary, in which active volunteers and members of the parish gather every morning and prepare food to give to homeless people in the area. They serve meals to over 150 homeless people each day for 364 days a year — Christmas Day being the only exception.

The poor and hungry are served a meal from 11 a.m. to noon daily. Each person that goes through the line is treated with respect and dignity and served with no questions asked. In 2019, over 45,000 meals were served. 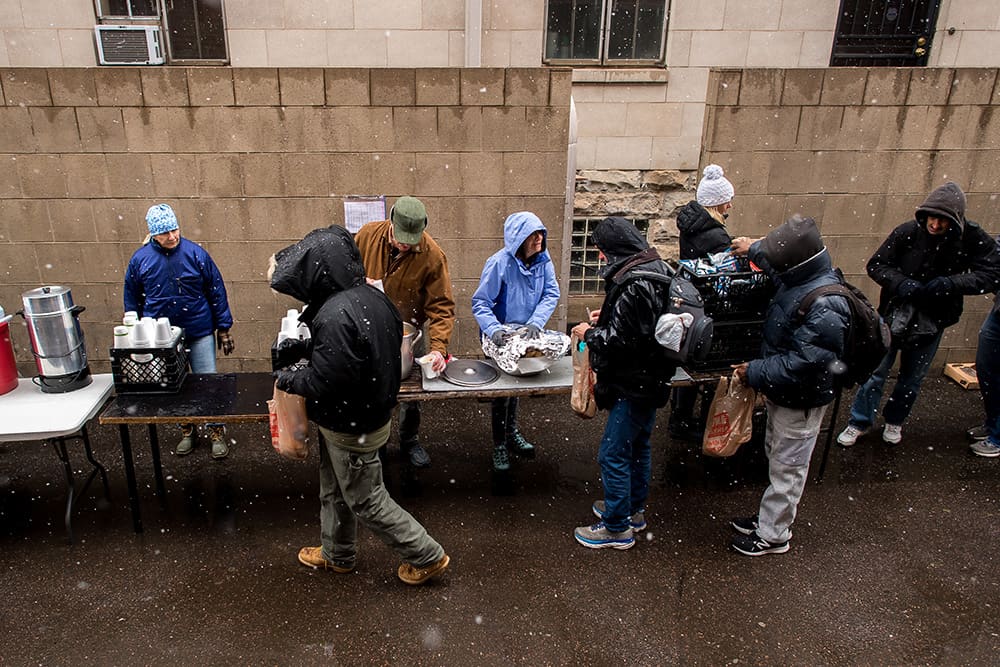 “It is a great blessing for me to serve as Pastor of Saint Elizabeth of Hungary Church since becoming a Mission to the Cathedral in 2016,” Father Ron Cattany told the Denver Catholic.

St. Elizabeth also has a special connection with some saints and servants of God. Servant of God Julia Greeley served the poor each month at St. Elizabeth. In addition, during her time in Denver between 1902 and 1912, Mother Cabrini also included St. Elizabeth on her donation circuit.

“My blessing is doubled serving at the only Church in Colorado attended by two Servants of God,” added Father Cattany.

Even though the traditional neighborhood for St. Elizabeth was destroyed by urban renewal in the late 1960s, the church still lies in its strategic location.

COMING UP: Flocknote makes it easy to sign up for Mass and more

Flocknote recently launched a Signups feature that makes it easier than ever to create sign up forms. It’s especially helpful right now as parishes require parishioners to sign up to attend Masses, but it can be used for much more than that. If you’re a Flocknote user, check out the video above for tips on how to use it.

If you’re not already signed up for your parish’s Flocknote account, be sure to ask how you can start getting crucial parish communications!