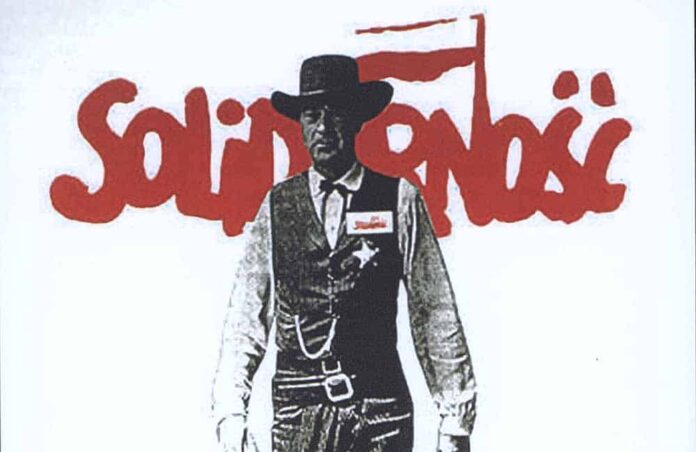 Thirty years ago last week, Poland began to self-liberate from communism through the first semi-free elections held behind the iron curtain since World War II. The memorable 1989 election poster created by the Solidarity movement’s graphic artists featured Gary Cooper as Marshall Will Kane in the western epic, High Noon: the lawman was wearing a red-and-white Solidarity pin over his badge while striding purposefully toward the bad guys, with the jumbled red-letter Solidarnosc logo in the background. There were no slogans on the poster; the image said it all — this is an election of great consequence, between good and evil.

As things turned out, Solidarity candidates won 99 out of the 100 contested seats in the newly-created Polish Senate and swept all the contested seats in the lower house of parliament. That overwhelming victory on June 4, 1989, turbo-charged the decade-long process of change ignited in east central Europe by Pope John Paul II’s 1979 pilgrimage to his native land. By the end of a true annus mirabilis, communism was finished throughout the Warsaw Pact and was on its way into the dustbin of history in the Soviet Union (a state that was also on its way out the door, much to the chagrin of a middle-tier KGB operative named Vladimir Putin).

During the tumultuous 1980s, Poles often said that they wanted a “normal society,” and that is in large measure what they’ve gotten. Poland is a robust, if increasingly fractious, democracy. Its economy is among the most robust in Europe. Poland is a member of the European Union and a stalwart of the North Atlantic Treaty Organization. The cultural free-for-all we now associate with late modernity and post-modernity is well established in Polish cities and in the national media. Virtually every imaginable public policy argument encountered in the older democracies of western Europe and North America can be found in Poland, although it can’t be said that those arguments are conducted in Poland with any more rationality and civility than elsewhere.

That’s a sadness. For as Solidarity’s High Noon poster reminds us, there was, in living memory, a brief, shining moment of moral clarity in Polish politics. And while it would have been foolish to expect that the line between good and evil would remain as bright and bold as it was when the issue was communist tyranny vs. democratic liberties, it might have been hoped that the lessons of the 1980s would have led Poland to model a new depth of debate in politics, rather than recycling the shallowness and shrillness found in much of the democratic world today.

What would John Paul II have made of all this? He would likely have been disappointed. But he would have remained a witness to hope, a man convinced that the better angels of our nature have a place in public life. And he would insist that public life is not just a gladiatorial arena for contesting power. Democratic public life must also be a place of human encounter, a place for building solidarity as well as for exercising personal liberties; a place where moral truth can make its claims and where “freedom” means more than childish willfulness.

What John Paul II would not have countenanced in any way, shape, or form is the anti-Semitism that occasionally bubbles to the surface of contemporary Polish public life from the fever swamps of the past. He would have deplored a Polish parliamentarian describing as a “provocation” the Passover good wishes tweeted by the U.S. ambassador to Poland in April. He would have cringed at a Polish political activist’s squalid complaint about the ambassadorial tweet: “Christ died and was resurrected also for you, pagans and traitorous Jews.” And he would have been appalled by a Polish bishop fouling his Chrism Mass homily on Holy Thursday by quoting a fake anti-Semitic text from the 1930s, redolent of the Jewish-world-conspiracy madness of the bogus Protocols of the Elders of Zion.

Public anti-Semitism is an infallible indicator of sickness in the body politic, everywhere. The Solidarity coalition that liberated Poland 30 years ago was composed of Catholics and Jews, believers and non-believers, radicals, liberals, and conservatives. That coalition took its inspiration from a Polish pope who bent every effort to heal ancient wounds in Catholic-Jewish relations. This 30th anniversary of an electrifying moment in Polish history is a good time for Poles of all political persuasions to reclaim his heritage — and live it.