Here’s what Christmas looks like in different cultures in America 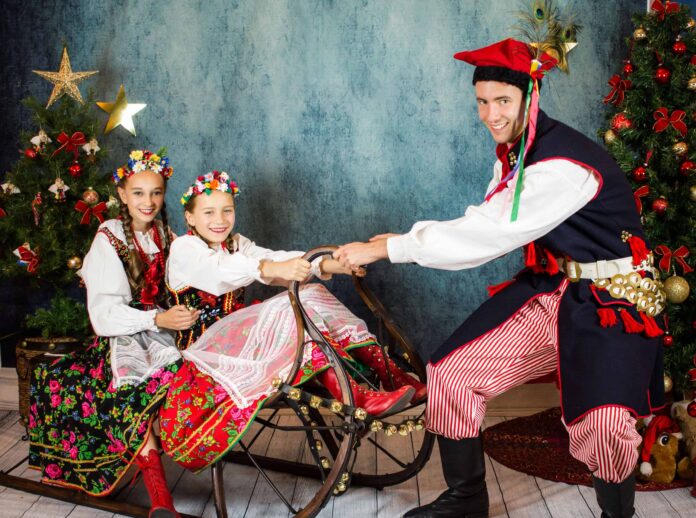 The Christmas joy in the Catholic Church is indeed “Catholic.” Its universality becomes evident in the many ways believers from different countries celebrate the same feast. Such richness is alive in Denver and in most of the country, reminding us of the beauty of being truly “universal.” Here are some of the ways Catholics celebrate Christmas in our midst!

The Grondalski family (Henryk, Margaret and their children: Peter, Anna and Julia) don’t only celebrate Christmas the Polish way, they also do it speaking Polish. They are members of St. Joseph’s Polish Parish in Denver and Margaret serves as the principal of the Polish Sunday School.

The family waits for the first star to show on the sky of Christmas Eve to begin the family dinner, symbolizing the star that led the three wise men. Their tradition consists in having a 12-dish dinner with absolutely no meat, an ancient European tradition of abstaining from meat in anticipation of a feast. Instead, some of the dishes include the “kasza,” elegantly served with salmon, braised cabbage and mushrooms – only after a beets soup containing “pierogi,” filled dumplings.

At the center of the table, a stack of hay is left under a few wafers on a cloth. This symbolizes the Eucharist and the child Jesus on the manger. It’s not until the following day that the family eats a festive meat-based meal.

The Wynar’s celebrate a Ukrainian Christmas with the whole family, literally, all of it: Living or not. They follow the traditional practice of leaving an extra plate with dessert for those family members who have passed away. It’s a way of honoring their presence and participation in this great feast.

Misio, Mariana and their children – Melania and Bohdan – are parishioners at Transfiguration of Our Lord Ukrainian Catholic Church in Denver. Other than speaking Ukrainian at home and teaching it to their children as their first language, Misio and Mariana also follow their parents’ tradition of having a 12-course meal on Christmas Eve. The meal, containing no meat or dairy products, begins with the first star of the night. And three rings of Christmas “kolach,” a traditional braided bread, are placed at the center of the table with a candle to symbolize the Holy Trinity.

Other Ukrainian traditions include giving gifts on the feast of St. Nicholas instead of Christmas and placing hay under the table, a Christianized ancient practice to represent the manger.

Jose Angel and Claudia Amador have numerous activities to prepare their family – Jose Angel Jr., Emanuel, Andrea, David and Daniel – for Christmas. The family attends the “posadas” (Spanish for “lodging”) at St. Pius X Parish in Aurora, Colo. The 400-year-old tradition refers to the time Mary and Joseph looked for an inn in Bethlehem. They consist of gatherings for nine consecutive days leading up to Christmas to pray a rosary and novena, and enjoy Bible plays, songs and food.

On Christmas Eve, a rosary is prayed before dinner, during which the real clothes on the statue of Baby Jesus are taken off. Afterward, he is laid and venerated on the manger of the Nativity scene, wrapped in diapers. He will remain there until Jan. 6 (or Feb. 2 in other regions), the Epiphany of the Lord, when he will be dressed again, sat in a chair and placed on a place of devotion. The Amador’s give presents to their children on Christmas Day, telling them that it was Baby Jesus who brought them.

The Bonsu family – Seth, Monica, Blessing, Linda, Elvin  – keeps the joy of the Christmas season common in Ghana. Although they miss the all-night drumming and dancing on the streets of their hometown after midnight of Christmas Eve, they still dress completely in white for Mass on the 25th, at Queen of Peace Church in Aurora, Colo. Colors are key. On Good Friday, they usually only wear red or black to represent their mourning. On Christmas and Easter, they all wear white as a sign of joy.

Their main meal is on Christmas Day. Christmas Eve is mainly dedicated to set up a manger and have the kids perform a Nativity play. On Christmas Day, they have the most special dinner of the year. It is the time to make a delicious meal, such as their traditional “fufu,” served with peanut soup and chicken.

On Dec. 25 and 26, it is common to take the children to houses of family members or friends for gifts, where they usually receive sweets and small toys.

Joél and Giovanna Contreras remain strong in their Italian Christmas practices with their children: Rachel, Grace and Zawadi, originally from Congo; and Francesco and Lorenzo. They don’t only prepare through their service at Cure d’Ars Parish in Denver, but also by making crafts. In fact, most of their Christmas tree ornaments are made by hand.

The Contreras family sets up a big Nativity scene they made from chalk, clothes and wood years ago. The many figurines in the set were brought from San Gregorio Armeno in Naples, famous for such art. All are painted by hand and dressed in real clothes.

On Christmas Eve, they enjoy a long, fish-based dinner with seven to 10 different dishes. They begin with appetizers such as shrimp cocktail and move up to a “scoglio” pasta, followed by salmon, many side dishes and “pastiera” or other desserts. Christmas Day is first and foremost a family day for the Contreras’. They spend the day doing family activities that range from playing games to watching a movie together.