‘He comes as the Vicar of Christ’ 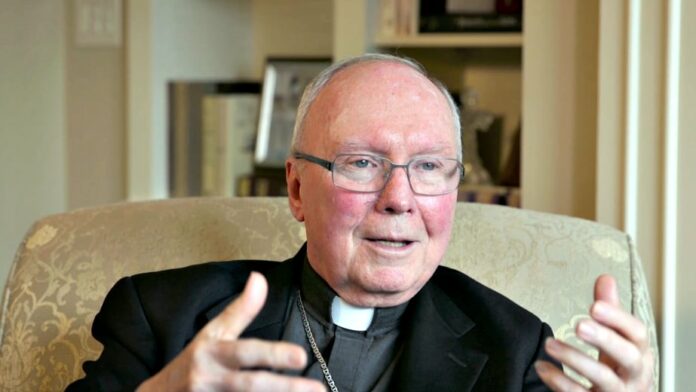 How does one go about greeting the Vicar of Christ?

This is the question Catholics in the United States are asking as we prepare for the upcoming visit of Pope Francis, who will visit three cities in six days later this month.

To answer that question, the Denver Catholic sat down with Cardinal J. Francis Stafford, archbishop of Denver from 1986-1996, who welcomed Pope St. John Paul II to the archdiocese in 1993.

Q: What does a visit from Pope Francis mean to Catholics in the United States?

Cardinal Stafford: All of us are thinking about this visit, reflecting upon it, reflecting upon it in the context in which we find ourselves as American Catholics. It is a context that [includes] many blessings as Americans, but also many challenges, especially in these times. And the challenges are dealing with how the message of Christ is to be expressed in the United States.

The Holy Father is coming here in the hope that he will find that the message of Jesus is being received by the Catholic people of the United States, not as the word of men, but as the very Word of God. He comes hoping to be confirmed in that expectation.

Q: What message will Pope Francis bring to the Catholic Church in the United States?

Cardinal Stafford: The Pope will be coming as a pilgrim. A pilgrim is kind of a wayfarer—somebody who is on the way. He has not yet reached the homeland. So one of the things he is going to tell us is that like himself, so you are to be a pilgrim. We are all fellow pilgrims. This earth is not our homeland.

Through Jesus, God has established, he will say, an alternative community to the world. That alternative community has been proclaimed by Jesus to the crowds in the Sermon on the Mount. So [the Holy Father] is going to proclaim … what the essence of that Kingdom is about. And that Kingdom is substantively composed of those who are happy being poor in spirit. Happy, blessed are the poor in spirit. Blessed are those who seek and hunger for justice. Blessed are the meek. That will be the message of the Holy Father. That has been the continual message that we have heard from this Bishop of Rome.

And we can say that perhaps the most important of the beatitudes is “Blessed are they who mourn, for they shall be comforted.” I think the Holy Father may focus upon the mourning that we are undergoing as Catholics in the Unitd States, and how do we face that mourning, that weeping. Blessed are those who weep.

Q: What was it like to welcome Pope John Paul II as a pilgrim to Denver in 1993?

Cardinal Stafford: Usually we make a pilgrimage to Rome, and Rome, according to our medieval brothers and sisters, was a place in which they could sip from the well of God’s mercy. The forgiveness of God was better known by the pilgrim who came to Rome, than by the one who did not come to Rome. In the summer of 1993, the Bishop of Rome was coming to Denver, and we were to experience the Bishop of Rome, who is the divine instrument of unity and forgiveness within the Church and beyond the Church, among all men and women.

Now, in 1993 we were encountering John Paul II, and in him was Christ, and according to the measure of his call, of his vocation, he was Christ who had been called by Jesus to be the foundation of his Church. Such is Peter. Such is the Christ in Peter. So, when he came to Mile High Stadium, I thought, he comes as one who bears within himself, within his person, Jesus Christ, as every baptized Christian does, but he also bears Jesus Christ who chose him to be now, the foundation of his Church.

Q: What attitude should American Catholics have when listening to the Pope’s words this month?

Cardinal Stafford: The Catholic people, in faith, are to greet Pope Francis as one who carries Christ within him, and to have faith toward the Holy Father that is representative of that attitude of faith, that is, to be subject to him out of reverence for the Christ within him who has called him to be the rock, the foundation stone, the source of unity, the sign of unity, the instrument of unity and forgiveness, the one who bears—Again, can we believe this?—who bears and carries the keys of the Kingdom of Heaven.

PRAYER FOR THE POPE

Cardinal Stafford suggests that all Catholics pray daily for the Pope, particularly in the days leading up to his visit to the United States this month. The following is an ancient prayer based on Psalm 40 [41 in some translations].

Let us pray for Francis our Pope.

May the Lord preserve him, and give him life, and make him blessed upon the earth, and deliver him not up to the will of his enemies.