In the 1970s, Windsor’s small community of Catholic believers gathered in an unlikely setting.

“We used to meet over a laundromat downtown,” said Father Gregg Pederson.

The community, which had been a mission of nearby parishes for several years, eventually grew large enough to build its own church.

Now, the numbers at Our Lady of the Valley Catholic Parish in Windsor continue to flourish.

“We’ve had an explosion of growth,” said Father Pederson, the parish’s pastor.

Parishioners gathered at Our Lady of the Valley in Windsor for Mass and an open house to celebrate the parish’s new additions. Photo by Jason Weinrich

Not only has Father Pederson witnessed a spike in new parishioners since he joined the parish, but he’s also noticed a greater parishioner involvement in adult small group ministries and children’s religious education.

It gives the pastor hope for his parish, but also for the entire Church.

“This past month, there’s been a lot of dark news about the Church,” said Father Pederson. “But our people are still faithful here and very vibrant.

To embrace the growth and accommodate current and future parishioners, Our Lady of the Valley added an adoration chapel, two nurseries, a youth room, a parish hall with a new kitchen, 18 meeting room or classroom spaces, and new offices.

The construction process began in 2014 when a group of parish staff met with Integration Design Group (IDG) and Adam Hermanson, principal of IDG who served as the architect for the project.

In 2015, committee members met with the town of Windsor and eventually the Archdiocese of Denver to get approval for the project. In August that year, the parish kicked off a capital campaign.

Fransen Pittman, the chosen construction team, began their work after the groundbreaking ceremony in August of 2017. The entire expansion was completed in 11 months.

“It was a pretty monumental effort,” said Mike Myshatyn, Director of Maintenance and IT at Our Lady of the Valley, who also served on the design committee and eventually took on the role of project manager for the expansion.

“Each building has its own nuance,” said Myshatyn.

The updates are designed to accommodate on the needs of parishioners who will utilize them. Several of those parishioners were invited to be part of smaller subcommittees, which allowed them to be involved in decisions along the way.

“We wanted to consciously make sure that we reached out to all of the people that had a vested interest and had some insight and personal knowledge of what worked,” said Myshatyn.

“We were talking with the people that were going to end up using this stuff,” he said.

But with a steadily growing parish, the additions are not simply designed for today.

“We designed it with the future in mind,” said Myshatyn. “We really were trying to be forward looking.”

Archbishop Aquila blesses the new chapel at Our Lady of the Valley. Photo by Jason Weinrich

An example of that, he said, is that although the parish might not need 18 classrooms now, the rate of growth over the past few years suggests it will in the future — and possibly even more, which is why the classroom wing is designed with additional strength to hold a second story if it needs one.

Father Pederson attributes the parish’s development to an increased population in Windsor and surrounding towns, the parish’s worship experience and its small group ministries.

We designed it with the future in mind.”

Its bustling community can now enjoy the expansion, which they came together to see during an open house on Aug. 26 following Mass and a blessing by Archbishop Samuel J. Aquila.

Father Pederson was grateful to be part of such a historic milestone for the parish.

“It’s a very exciting, energetic place to be,” he said. 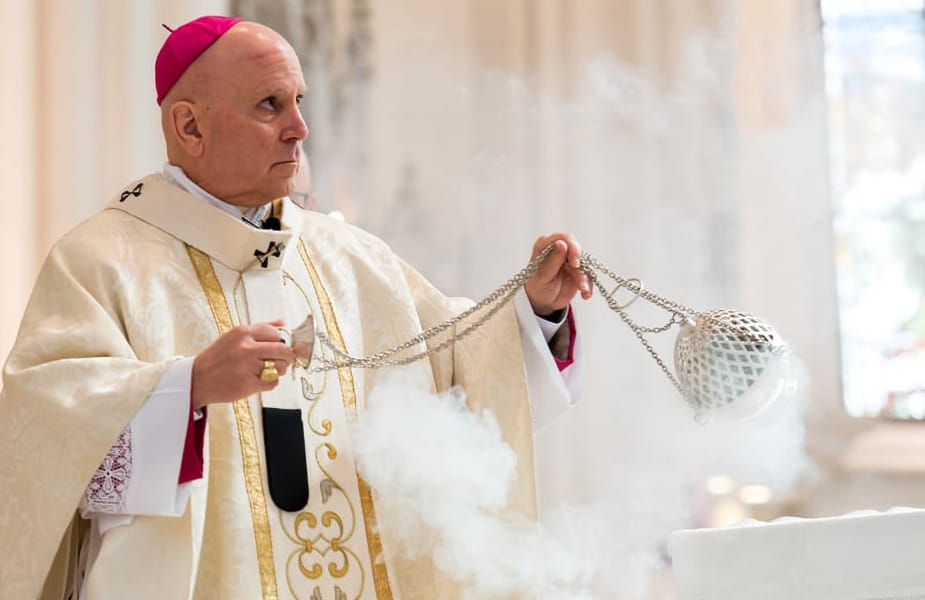