His Church. Our Experience.
Subscribe
HomeLocalGrab a drink, let’s chat about God
Local 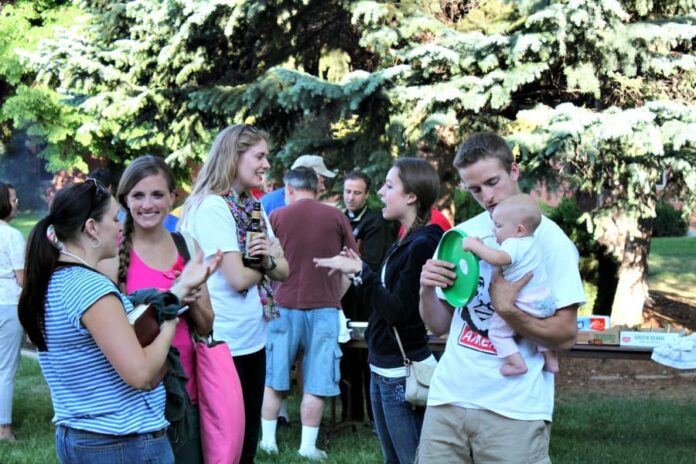 No one wants to be told they’re wrong, including Chelsey Nickel, a 29-year-old Denverite who was raised Lutheran.

So she joined her Catholic husband, Andy, and brought questions about the faith to the new “Pint with a Priest” gathering at Platte Park Brewery in Denver. A crowd of beer drinkers posed questions and joined a casual discussion led by Father Brian Larkin of Our Lady of Lourdes Church.

“He’s so relatable,” Nickel said at the last gathering May 12. “I think more priests should do this.”

She had questions about the practice of confession and praying to Mary while others asked about predetermination, suffering and joy.

Father Larkin said the gathering is meant to be a casual way to invite a dialogue about the faith without catchy slogans or a specific agenda. And a bar is the most unintimidating place for that, he said.

“If I’m a fallen-away Catholic, I’m never going to come to an event at your church,” he said.

Pint with a Priest is one of several events held to make non-judgmental discussions about the faith more accessible to Catholics and non-Catholics alike in a popular setting. Father Larkin said it’s also an effort to respond to a secular world where faith is becoming more irrelevant.

According to the Pew Research Center, the Christian share of the U.S. population is declining and more adults are not identifying with a particular faith. In May, the center revealed a study that found self-identifying Christians dropped 7 percentage points in 2014 from 78 percent in 2007, and the religiously unaffiliated jumped from 16 percent to 22 percent.

While Christian-affiliated Americans may be on the decline, a desire for God and questions about the faith has not.

Father Ed Ruane, O.P., pastor of St. Dominic Parish, also launched a night of inquiry with Father Luke Barder, O.P. “Court of the Gentiles” is a twice-a-month event that’s drawn dozens of people from the community for an intellectually-stimulating dialogue on any faith topic of interest.

The idea is based on Pope Benedict XVI’s call for a place where non-Catholics would talk with Catholics, like in the Bible when the Gentiles would engage in dialogue with the Jews.

“He felt the Church needed that,” Father Ruane said. “What the Church needs today is not an environment that defends Church teaching, but where people can come and talk and not feel pressured.”

Past discussions included marriage as a sacrament, purgatory, Christ’s resurrection and the rosary.

“We try to help them think and reflect,” he said. “It’s more to really engage them and talk with them so that they have a sense of inner freedom to open up and to speak with us.

“And there’s no obligation to come back.”

Danielle Syrup, coordinator of parish and family life at St. Mary Church in Littleton, also cited Pope Benedict as the inspiration behind the summer series “Getting Grilled.”

“Pope Benedict said it best when he said first and foremost (faith) is a personal and profound experience with God that you have, and then you share it,” she said.

This is the second summer the parish has held gatherings on the parish lawn. Attendees enjoy beer and brats before a speaker presents on a current topic.

“It’s a really laid back and cool atmosphere,” Syrup said. “We have some Protestants or non-believers who do attend just to learn more about what the Church teaches. For Catholics, it’s to understand and more fully explain their faith.”

The hope is not simply to impart information but equip those with faith to share it with the outside world.

“Apologetics is about defending the faith, but we also want people to be prepared to bring up the conversation and not just wait for people attack you or ask the questions,” she said.

Theology on Tap in Denver and Fort Collins and St. Thomas Aquinas Catholic Center’s Thirsty Thursdays in Boulder are similarly geared toward young adults. However, the idea is to open a discussion about the faith to everyone.

“It’s trying to help form deeper Catholics who are really engaged in their faith, but it’s also an opportunity for them to invite a friend in a non-pressured situation,” said Mary McGeehan, events and hospitality coordinator for the Archdiocese of Denver’s Office of Evangelization and Family Life Ministries. “You never know how God’s going to work on them.”

Get connected at http://archden.org/dcya for a complete list of events.