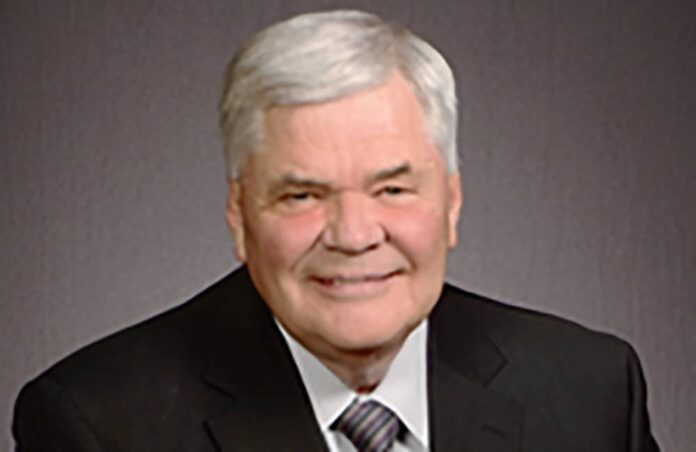 Gary Miller, a longtime and beloved employee of the Archdiocese of Denver, died peacefully surrounded by his family on Dec. 26, 2020. He was 71.

During his tenure in the planning and construction department with the archdiocese, Miller worked tirelessly on countless construction projects throughout the archdiocese, including the restoration of the Cathedral Basilica. He was well-respected by all who worked with him, and he carried out his job in humble service of those who sought his expertise.

“I believe that Gary did not consider his time at the Archdiocese to be ‘work’ in the true sense of the word, but instead it provided an opportunity to support God’s work through the completion of construction projects,” said Gordon Scott, a longtime friend of Miller’s and one of his co-workers in the planning and construction department at the archdiocese.

As officemates, Schott and Miller would discuss faith, family, friends and Nebraska Husker football, which Miller was a dedicated fan of. Schott also recalled his friend’s warm sense of humor.

“At the beginning of the workday as I entered the office, Gary would often note, I am glad you decided to return,'” Schott said. “At the end of the day, a common parting sendoff was ‘don’t forget to come back.'”

Prior to working at the archdiocese, Miller spent an accomplished 34-year career designing power plants for Xcel Energy (formerly Public Service Company of Colorado). Upon retirement from Xcel, Miller took a position with the archdiocese, where he worked for almost 14 years.

“Gary is a great mentor and friend! I relied on him for his institutional memory – he worked here for almost 14 years – and his executive expertise,” said Mike Wisneski, Director of Planning of Construction for the archdiocese and another of Miller’s close co-workers. “Gary was a senior member with Public Service Company of Colorado and Xcel Energy and brought an interesting perspective to working with clergy.  I believe that every priest he worked with respected him and liked him.”

Miller had no greater passion in life than his two children and four grandchildren, whom he loved dearly. He and his wife Linda were at every game, concert and school event that his kids and grandkids were, and he loved to play golf with his son and grandson. Another of Miller’s passions was flying, which Wisneski enjoyed hearing about.

“I will miss his long stories of past experiences, especially about his love of flying! He’s the only person I know who has seen the sun set twice on the same day, all due to a rapidly steep climb in a Leer jet on the way from Denver to Steamboat Springs,” Wisneski recalled.

Miller was generous with his time, ushering at his church for 40 years and volunteering for the Optimist Club of Monaca South, where he helped with the Christmas tree lot and serving thanksgiving dinner each year to over 800 children of the boys and girls club.

Miller is remembered by his family and friends as a very generous, giving and caring man. His work with the archdiocese, while thankless at many times, can be seen in the beauty of the parishes and various facilities he worked on. He will be sorely missed.

“Gary’s work on various projects, including his tireless efforts related to the rehabilitation of the Cathedral Basilica, will stand as a testament to a quiet man who preferred to do the Lord’s work in anonymity,” said Keith Parsons, Chief Operating Officer of the archdiocese. “As you look around and see the beauty in our facilities throughout the diocese, remember Gary, whose dedication to our faith-filled mission enabled all of us to see a little bit of God’s glory in the beauty Gary helped create and to which he devoted his enormous talent.”