His Church. Our Experience.
Subscribe
HomeLocalFund for Vocations opens door of discernment to consecrated life for local...
LocalStoriesOn MissionVocations 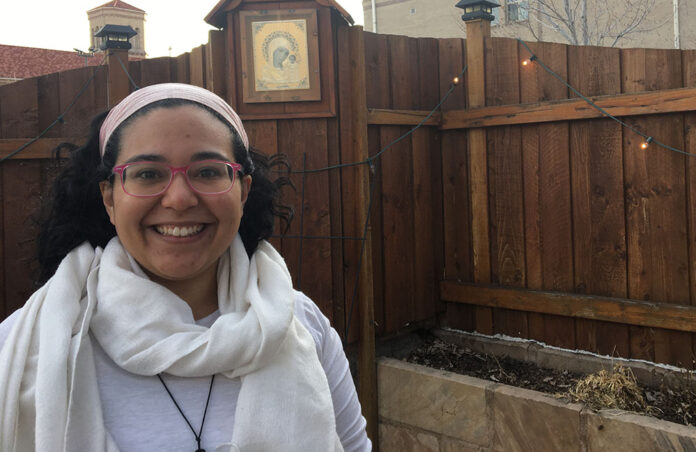 Although consecrated life was always a consideration for Mirjana Coccia while growing up, it wasn’t on her mind when she met the Community of the Beatitudes in Denver after relocating from Phoenix in 2017.

Coccia had recently decided she didn’t want to teach, which is what had taken her to Arizona armed with a newly minted bachelor’s degree in theology from Thomas Aquinas College in California. Being laid-off from her post-teaching customer service job and a breakup with her boyfriend led her to Colorado to be near a friend. The friend’s mother thought it would be good for Coccia to pray vespers with the Beatitudes Community. Initially hesitant, Coccia eventually went.

“I immediately fell in love with the liturgy,” the now 28-year-old Coccia said. “I wasn’t thinking about religious life at the time. But the more I was with the Beatitudes Community, the more I felt this is something I could give my life to.”

Unfortunately, Coccia owed $10,000 in student loan debt. To enter formation for many orders of the Catholic Church, men and women must be debt-free, enabling them to take the vow of poverty. Realizing it would take years to pay off her debt, Coccia applied for a grant from the nonprofit Fund for Vocations, which exists to help those for whom debt is the only obstacle preventing their entry into priesthood or vowed religious life. Providentially, she got it.

“All the money in the world belongs to God, if he wanted to give me some he could and he did,” Coccia marveled. “It’s beautiful to be free from the thing in the world that was preventing me from following my call.”

With shoulder-length dark, curly hair, pink-framed eyeglasses and a ready laugh, Coccia is one of 13 people from across the nation to whom the Fund for Vocations awarded grants this year. The fund takes over responsibility for its beneficiaries’ monthly student loan payments while the person is in formation. If the person leaves formation, the remaining loan balance reverts to him or her; if the person perseveres, the fund pays off any remaining balance within five years of final vows.

“Vocations are the lifeblood of the Church, and it is a tragedy to lose even one to a solvable problem like student debt,” Cory Huber, founder and chairman of the Fund for Vocations board, said in a statement. “The Fund for Vocations provides the lay faithful with a powerful, practical way to support vocations.”

Since its 2006 inception, the organization has provided debt relief to nearly 250 men and women pursuing a call to priesthood or consecrated life. This year, for just the second time in the organization’s history, it was able to approve all the qualified applications it received.

“We thank all the supporters whose generosity, even during such a challenging 2020, has meant the fund did not have to turn anyone away,” Huber said.

Coccia is deeply grateful to the Fund for Vocations.

“God bless them,” she said. “It was really a beautiful confirmation from the Lord that, yes, he does want me here.”

Canonically, the Beatitudes Community is an Ecclesial Family of Consecrated Life. One of the new realities of the Church that followed the Second Vatican Council, it was born from Catholic charismatic renewal as a contemplative and missionary community in France in 1973. It consists of three branches: consecrated brothers, which include deacons and priests; consecrated sisters; and lay members, both married and single. The community’s charism, according to beatitudes.org, embraces “life in the Spirit, the communion of the states of life, and apostolic works.” It places emphasis on the gifts of the Holy Spirit for the sake of mission and evangelization. It also fosters interest in the Jewish roots of Christianity, and prayer for the people of Israel and for the unity of Christians.

The Beatitudes Community has founded 50 houses in 28 nations worldwide. The Denver house is the only one in the United States.

The spirituality of the Beatitudes Community spoke strongly to Coccia’s diverse Catholic upbringing. Born in New Jersey as the eldest of five siblings, Coccia’s family moved to Austria when she was 10 so her father could attend the International Theological Institute, which was founded at the request of St. John Paul II to function as a bridge between the Eastern and Western traditions of the Church. The institute draws Catholics from a variety of practices — both charismatic and traditional — and nations, primarily Central, Eastern and Western Europe, and the Americas.

“It was like this little international community of Catholic families in the same town. There was a really strong Eastern Catholic presence, half of the student body was Byzantine. We went to Divine Liturgy all the time,” Coccia said. “I felt very at home in the Beatitudes Community because we’re also characterized by this internationality — there’s this really strong drawing from Eastern Catholicism, it’s charismatic and it’s also rooted in tradition.

“God has given me the same kind of eclectic mix I grew up with, and the idea of the different states of life — brothers, sisters and lay members — living in communion with each other.”

Currently in her aspirancy year, Coccia is discerning a call to consecrated life.

“It didn’t start out that way,” she said with a laugh. “We have the lay branch. At first, I was too afraid to think about becoming a sister.”

Her call to be a religious sister came when she went to Israel for three months with the Beatitudes Missions, which is an apostolate of the community for young people. During that time of pilgrimage and service in the Holy Land, Coccia had a strong encounter with Christ at Christmas in Bethlehem.

“It’s not that I didn’t know the Lord before,” she said. “It was like when you talk about baptism in the Spirit, where I felt, God is my Father! That really prepared me to say yes to the idea of consecrated life. I wasn’t ready to say yes until that moment.”

It will take seven to eight years before Coccia completes her formation with final vows.

Currently, Coccia and the three others in formation with her are fundraising for a six-week mission trip to Lebanon. On the “Year of Common Formation – Lebanon Mission,” they will do disaster relief service work and practice prayerful solidarity with the Christians there beginning June 16. She hopefully anticipates encountering the Lord anew while on mission, and daily through her formation.

“My journey has been the work of the Lord. I can do nothing [apart from Him], as the Scripture says,” she noted. “It’s really the Lord’s work, in the Lord’s time. It’s His call. It’s really beautiful.”