His Church. Our Experience.
Subscribe
HomeLocalFraternal brothers, and also blood: Meet the brother priests who serve at...
LocalParish NewsOn MissionVocations

Fraternal brothers, and also blood: Meet the brother priests who serve at the same Denver parish 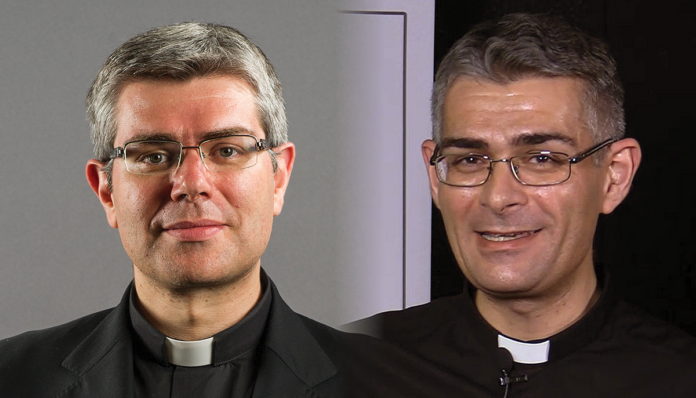 Earlier this week was National Brothers Day, a day meant to commemorate the brothers that we did not choose to have in our life but that God gave us. Even though a brother can (at times) be one of the most annoying persons you know, they can also be a friend whom you can trust. If you don’t have a brother then you can think of that person in your life who has been like one to you. Say what you will about them, but it is a blessing from God to have a brother that is also a best friend.

This is something that Father Angel Perez-Lopez and Father Israel Perez-Lopez can relate to very well. These brothers happen to be pastor and parochial vicar of St. Cajetan Catholic Parish, where they work together not only as brother priests but also as best friends. They were both born in Spain to a Catholic family but they both took two different paths before they found themselves in the same vocation. Father Angel, five years older than Father Israel, had a less clear path in figuring out his vocation.

“I was going out with a girl a the time for about three years thinking the whole time what would happen with my future,” said Father Angel. “Then I realized that what was wrong with me, that the reason I felt so unsatisfied with my life was that I never stopped to ask God what exactly he wanted for my life. Instead, I had basically decided for myself what I thought was good. So it was in that moment of liberty that I was able to tell God that I was willing to do whatever he wanted.”

So one night in December, on the solemnity of the Immaculate Conception, God let him know that what he wanted was what he had declared as a boy in that meeting a long time ago, to be a priest. At the age of 19, he left home and arrived at St. John Vianney Theological Seminary in Denver in the year 1996 to begin his studies.

Although younger than his brother, Father Israel had a clearer vision of his vocation’s path. Since the age of 12, he knew that God had set him apart for something special. When his mom was pregnant with him she was very sick and due to the medication she had to take he had to have been born very sickly or die. Since it was a high-risk pregnancy they had suggested to her that she abort but she had refused. The odds were against him but God had the last word.

“God made a miracle so that I could be the way I am, I was not supposed to live but God intervened,” Father Israel said. “Looking at that is what has always, along with many other things, but most of all that idea, is what made me see clearly that my life was for God in this way in particular.”

Even though they ended up with the same vocation, both brothers believe that they did not influence each other in the choice to be a priest since they both had very distinct ways to hear God’s calling. However as brothers, they share the same vision of their vocation and what the Church is, and that makes serving God easier.

“I have full confidence in Father Israel when I leave him in charge,” Father Angel said. “I know that he will do things the way I would do them if not, better. In fact, I like to tell the parishioners that Father Israel is five years younger than me so he is like the iPhone, the more modern they are, the more apps they have and they can do more things,” he said with a laugh.

Their time at St. Cajetan’s is also the longest that these siblings have lived together since they were children. Another odd (or maybe divine) coincidence occurred in the years 2011-2012, when they studied together in Rome. Without knowing, Father Angel’s bishop in Denver and Father Israel’s bishop in Spain had sent them to the same university in Rome.

Now they both serve in St. Cajetan’s Catholic Parish in Denver. For many people, it piques their interest to see that two priests are brothers and also serve in the same parish. However, Father Israel is convinced that what makes us live in communion and deep friendship with each other, even those who aren’t our blood relatives, is God.

“It’s not the flesh nor blood, not even the natural affinities we have towards each other, it is the Lord, who is the truth,” Father Israel said. “He is what is good for us and what we have in common and what makes us live in harmony.”

Still, the big question remains: how should the love of God be in the relationship of siblings if we don’t always get along? We should love God above all else, is what Father Israel thinks. When we love God first and then everybody else and ourselves, this sanctifies the relationship between brothers. It is important to love the things of the world that are for and with God. That is why when we don’t have God, we easily fall into rivalries between our siblings and others, explained Father Israel.

Filial love is a special love that not everybody has experienced in their life. In the Bible, the love of a friend and a brother is recognized by God as the most important love. So let us thank God, not just on National Brothers Day, but every day for the brothers, cousins, friends, or even brother-in-laws that have been true brothers to us.