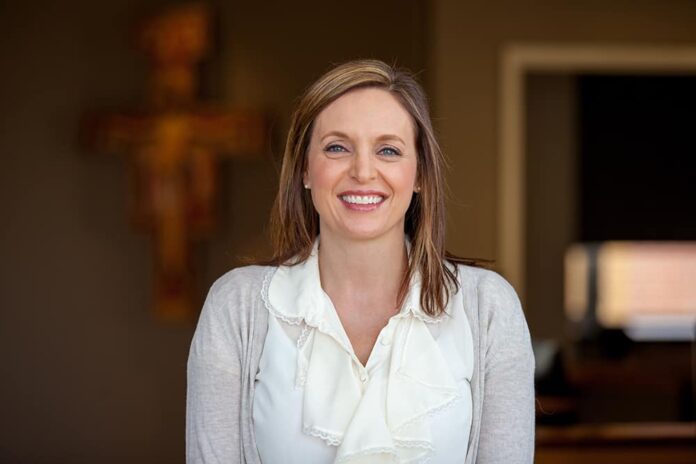 As the school’s Aug. 21 start date approaches, Frassati Cathlolic Academy in Thornton is well on its way to an exciting first day with the hiring of its principal.

It was announced Feb. 14 that Sara Alkayali will serve as Frassati’s first principal. Alkayali has 20 years’ teaching experience, from the elementary to junior college level, and has spent the last 10 years serving as both a teacher and assistant principal at Blessed Sacrament Catholic School in Denver.

An open house for the school will be hosted March 19, which also marks the first of weekly Masses said at the school. Alkayali will be there to meet new families and show prospective students around the school.

Once her youngest daughter was old enough to be enrolled in Kindergarten, she began looking at options but was largely unsatisfied with what was out there. Her search led her to Blessed Sacrament.

“Literally, the moment I walked in the door, I felt that loving embrace of the Catholic school,” Alkayali told the Denver Catholic.

In addition to enrolling her daughter at the school, Alkayali would end up getting a job at Blessed Sacrament as an English teacher, marking the beginning of her road not only toward becoming the new principal of Frassati, but also her conversion to the Catholic faith.

As the new principal of Frassati, Alkayali fully embraces the school’s Catholic identity coupled with its model of classical education. She’s a strong advocate for the classical track, arguing that it equips students with the proper tools to effectively analyze their world, and believes that the classical method integrates seamlessly with a Catholic education.

“Classical Catholic education is very elegant, actually, because throughout every level of the child’s education it’s inspired by the Gospel and integrates all the beauty of the magisterium and the teachings of the Catholic Church, living that day in and day out through their classical education,” she explained.

Alkayali is overseeing the process of making Frassati look and feel like a Catholic school. Currently, construction crews are turning one of the music rooms into an adoration chapel and transforming the cafeteria into a space for Mass, which they’re calling the “chapel-teria,” she said.

“[We] want to beautify this space so that it’s beautiful enough to have Mass in, but also giving it the functionality so we can use it as a cafeteria during the day,” she said.

The prayer space will play an important role in the life of the school from day one, Alkayali said. When parents drop their kids off for the school day, them, their children and the staff of the school will gather to start the day with a prayer.

“Rather than just drop-off and go into your classroom, everyone’s going to join in our new ‘chapel-teria’ and our everyday routine will be to come in, pray together, enjoy each other as a community and celebrate who we are as a Frassati community,” Alkayali said.

Enrollment in the school is increasing daily, she said, with 59 students currently enrolled as of this writing. The school is attracting two kinds of families, she said: those who are familiar with the classical model and want their kids to be educated in it, and those who are excited a new Catholic school is opening close to them.

As an incentive to increase enrollment, those students who enroll before March 31 will be eligible for a 20% discount off their tuition for the life of their attendance at Frassati.