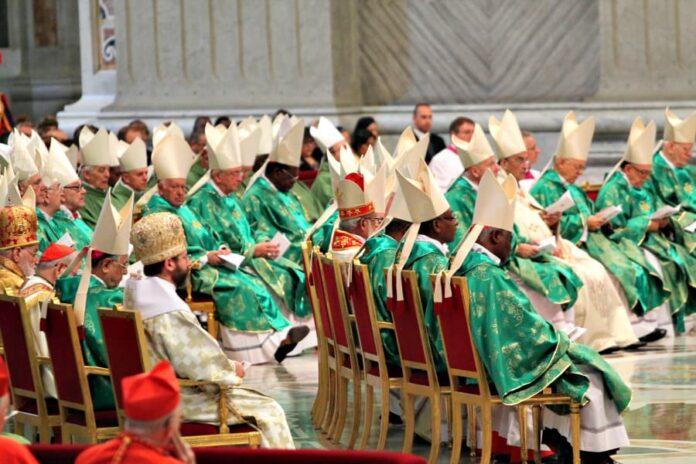 Vatican City, Oct 6, 2014 / 07:45 am (CNA/EWTN News) – During the opening session for the extraordinary synod on the family, Pope Francis told participants not to be afraid of saying what they truly think, and that only by doing this can they reach real conclusions.

“You have to say all that which in the Lord you feel you have to say: without human respect, without timidity,” the Pope told synod participants in his Oct. 6 opening remarks.

“And, at the same time, you must listen with humility and accept with an open heart what your brothers say. Synodality is exercised with these two attitudes.”

Initiated yesterday with a mass presided over by the pontiff, the Extraordinary Assembly of the Synod of Bishops on the Family reflects on the theme “The pastoral challenges of the family in the context of evangelization,” and was called for by the Pope in order to form a more concrete reflection for the Ordinary Synod to take place in 2015.

The synod will conclude with the beatification of Pope Paul VI, institutor of the synod of bishops, by Pope Francis on Oct. 19.

Speaking directly to the synod rapporteur, secretary-general and the three president delegates of different episcopal conferences present, Pope Francis explained that they bring to the meetings “the voice of the particular Church, gathered at the level of local churches by the Episcopal Conferences.”

“This voice you bring in synodality. It’s a great responsibility: to bring the realities and problems of the Church, to help them walk that road that which is the Gospel of the family,” the Pope continued.

And one basic condition of synodality, he said, is to “speak clearly. No one say ‘You can’t say this; think of me this way or that…’ You have to say everything that you feel with frankness.”

Pope Francis then recalled how he received an email from a cardinal after the consistory that took place in February, saying “it’s a shame that some cardinals didn’t have the courage to say some things out of respect of the Pope, feeling, perhaps, that the Pope was thinking something different.”

“This is not good, this is not synodality, because you have to say all that which in the Lord you feel you have to say,” the Pope explained, saying that they must also be humble and open to the opinion of others.

“I ask you, please, (to have) these attitudes of brothers in the Lord: speak with frankness and listen with humility.”

The Roman Pontiff also expressed his “deep and sincere thanks to all the people who have worked with dedication, patience and with competence for many months, reading, evaluating and developing themes, texts and works for this Exraordinaty General Assembly.”

He gave special appreciation to Cardinal Lorenzo Baldisseri, Secretary General of the Synod, Msgr. Fabio Fabene, Undersecretary, as well as all of the speakers, writers, consulters, translators and staff of the Secretariat of the Synod of Bishops.

“They have worked untiringly, and continue to work, for the good outcome of this Synod: thank you very much and may the Lord reward you!”

Also recognizing the various cardinals, patriarchs, bishops, priests, religious men and women and laypersons present, the Bishop of Rome explained that their presence “enriches the work and the spirit of collegiality and synodality for the good of the Church and of the family!”

He encouraged discussion to take place “with tranquility and peace, because the synod always takes place with Peter and under Peter, and the presence of the Pope is a guarantee for all (in the) safeguarding of the faith.”

So “we collaborate with all because it affirms with clarity the dynamic of synodality.”