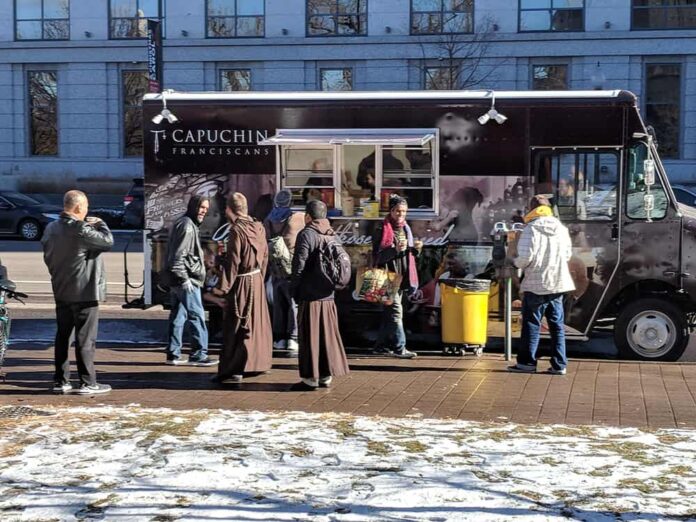 Like their food truck counterparts, they are drawing fans offering something special — in their case, fresh, healthy wraps loaded with lean meat and veggies. Unlike other culinary roadies, their food is free.

The main difference about the friars’ food truck? It’s not really about the food, but about presence.

“On the face of it our food truck is seeing to the physical need of people, but on a deeper level it serves a spiritual need and even an evangelical purpose,” said Father Joseph Mary Elder, O.F.M. Cap., head of the new ministry.

“Our charism is to be little brothers to people—friars minor,” he explained. “We want to use the food truck as an opportunity to enter into relationships with the poor.”

Painted Franciscan brown with colorful artwork depicting local friars engaged in ministry as well as Saints Francis of Assisi and Padre Pio, and Blessed Solanus Casey, the truck includes white text on the back acknowledging partnership with the Routzon Family Foundation, while messaging on the sides identifies it as belonging to the Capuchins and describing their mission as “Messengers of God’s mercy” and “Brothers to those in need.”

“It’s not only to feed the body, but to feed the soul, that’s what the food truck ministry is about,” said Cindy Routzon, secretary of the foundation and wife to its founder Ed Routzon.

The foundation bought the new F59 P700 14-foot Morgan Olson truck and, with additional aid from Regis University, has funded the food. Volunteers, including youth ministry groups, have helped put the lunches together. Some volunteers also help the friars distribute the food.

That day the friars handed out 300 turkey wraps to some 200 people. They now distribute up to 350 wraps. One Sunday, they gave away wraps and tamales, which was also a hit.

It seems they can’t make a mistake.

“We did some vegetarian wraps by accident once, one guy in particular loved it,” Father Joseph said. “We try to keep the meals healthy. We don’t want to perpetuate the health problems many homeless have with diabetes and other medical issues.”

Annunciation Church parishioners Audrey Wakely, 25, and her husband Connor Wakeley, 24, are among the volunteers who have helped make and distribute the lunches.

“It was eye-opening to see what the homeless community is like,” Audrey Wakeley said. “They were so nice — and very grateful. We liked interacting with and putting a face to the homeless. I think a lot of times, many of us try not to talk to them.”

Like the homeless, the imprisoned and the elderly they minister to, the Capuchins themselves are largely invisible to the wider community even though they’ve been ministering in the archdiocese for 41 years.

“This ministry creates an opportunity to share our brotherhood with other people,” Father Joseph said. “It’s also a good way to let people know we’re here.”

In unveiling the new ministry at the orders’ benefit gala in October, Father Christopher Gama, O.F.M. Cap., said the food truck ministry aims to answer the new evangelization call of St. John Paul II to find innovative ways to spread the Gospel in the 21st century.

“This new initiative is about that,” Father Christopher said.  “To bring Christ into the world in a fresh new way.”

Those involved affirm that’s the case.

“I was thinking of Father Solanus Casey during the [first] trip,” Brother Jude said. “He and other friars had opened a soup kitchen and we’re doing that, only ours is mobile and it’s going to where the people are. It’s like a modern-day soup kitchen on wheels.

“The preaching we do is the love we show,” he added. “That’s the image of God we give: God who’s present.”

Among those accepting a lunch that day was a man identified only as Greg. He echoed the comments of other recipients who raved about the healthful, tasty meal — and he expressed hope to see the food truck again.

“I’m very happy to see the food truck and the Capuchin Franciscans out here,” he said. “It’s so needed. It’s wonderful that someone somewhere in the Catholic Church had this beautiful idea to do this. I hope to see more of this.”

Portions of this report originally appeared in the Capuchin Franciscans’ Winter 2018 publication The Porter.