If the Church is a hospital for sinners, then these saints are the foreign night-shift nurses whose name you can’t pronounce. They’re dedicated, they love you, and you can’t help but giggle every time you hear their name come over the PA system.

Much like my analogy, our spiritual lives would fall apart if these saints weren’t there to inspire us. Because despite the overwhelming urge to laugh every time we pray for their intercession, we have to admit that they love us more than we could ever imagine.

All you holy men and women, weirdly-named angels and saints of God, pray for us!

St. Hilarius ironically appears to be one of the holiest buzzkills in Church history. He was a pope, so he wrote encyclicals — but they were about discipline. He convoked a synod — to discuss hierarchical titles and property sales. He fought some heresies, which is cool, but the heresies weren’t even interesting. All told, I honestly would have had more fun  listening to a pair of Dockers tell me about their food allergies than I did reading his biography. He was basically the Ordinary Time of people.

And yet…his name is Hilarius. The most coma-inducing saint in “Butler’s Lives of the Saints” is a homonym for something that causes unadulterated joy.

That, my friends, is truly hilarious.

In addition to coming devastatingly close to being named after a Pokemon, St. Polycarp was the bishop Symrna and an apostle of St. John the Evangelist. (Maybe I should have led with that?) Anyway, he was connected to just about every important person in the early Church. He even kissed St. Ignatius of Antioch‘s chains as the latter was led to his martyrdom. He was known throughout the ancient world for his love of Christ, hatred of heresy, and gentleness towards sinners.

His most endearing trait, though, was his sass. According to “The Golden Legend”, he once met a notorious heretic in the street and tried to brush by him. “Do you not know me?” asked the heretic. “Yes,” said St. Polycarp. “I know you as the first-born of Satan.” SASS.

The Smyrnian state officials began to persecute everyone who refused to worship the state gods. St. Polycarp refused (SASS), and was condemned to be burned to death. His persecutors wanted to nail him to the stake, but he told them not to bother. (SASS). So they set him on fire.

Then something miraculous happened. St. Polycarp didn’t burn (SASS).  Instead, he began to glow like “bread baking,” “metal refined,” or “a Charmander evolving.” Realizing he was sassing them yet again by refusing to die, the soldiers stabbed him in the heart. That did the trick. However, the fountain of blood that poured out of him was strong enough to put out the fire. In other words, he sassed them in death.

Let this be a lesson to any pagan Roman procounsels reading this: Catholics always have the last sass.

Closest thing to an icon I could find.

St. James was a noble Persian from a Christian family. He was good friends with the prince of Persia (insert video game joke here), and soon fell into his buddy’s pagan ways. When he eventually reverted, the penances he gave himself were so harsh that the prince realized he must be a Christian (remember, this was back in the time of hair shirts and stylites). He charged St. James with being a “Nazarene” and sorcerer, and sentenced him to be cut to pieces until he died (like you do).

“The Golden Legend” then commences to give us a literal blow by blow account of St. James’ dismemberment. He cried out a prayer after every digit was amputated, and the resulting prose is truly a Catholic cultural treasure.

Here are some of my favorite quotes:

“Go, third toe, to your fellow toes, and as the grain of wheat bears much fruit, so you at the last day will rest with your companions.”

“Little toe, be comforted, because the big and the little will arise again, and not a hair of the head will perish!”

“Fingers, Lord, I have none to hold out to you, nor hands to extend to you; my feet are cut off and my knees demolished, so that I cannot kneel to you.”

He said that last one while looking at a pile of 27 of his own body parts. I have broken the Second Commandment over a paper cut. Let’s all learn from his story, shall we?

Finally, after eight hours of this slasher film-worthy torture, his executioners cut off his head. He is the patron saint of lost vocations, which feels vaguely threatening if you think about it too much.

I really assumed his story couldn’t be better than his name, but I was wrong. Let’s start with the fact he was a Viking (seriously). Then let’s move on to his pedigree as a descendent of King Harald Fairhair, meaning he was a pale, flaxen, princely mound of flesh who also wore horns on his head. He was like a ye olde Norwegian prince version of Jim Gaffigan.

St. the Fat was basically always fighting someone in a misguided attempted to serve the Church. He later brought missionaries to Norway to evangelize his people, but got impatient and tried to force them to love Jesus. The people apparently would have preferred a more pastoral approach, as they revolted and forced him to flee to Russia. Some people might have taken this opportunity to re-evaluate their lives and make some changes. St. the Fat gathered troops and stormed Norway. Many parts, one body.

His plan failed when he was killed in battle. The Norwegians gathered around the massive crater that presumably formed when his seemingly infinite girth hit the earth. “Perhaps we misjudged him,” they mused. “Perhaps his multitude of varicose veins were only evidence of his enormous heart.”* So they made him a champion of national independence and a martyr. His battle axe is still in the Norwegian coat of arms.

If that doesn’t make you proud of your Catholic heritage, I honestly don’t know what will.

*Quotes may be bald-faced lies. Except for the St. James dismemberment ones—I cannot stress enough that those are actually real.

COMING UP: Despite no Masses, you won’t believe what parishes are doing

Nothing like creativity and some humor to make a tough situation a little easier to endure.

“It took generations, but they have succeeded where the rest of us have failed. Children, of all ages throughout the world, have successfully given up school for Lent,” St. John the Baptist Parish in Longmont posted on its Facebook page April 1. Quite a few “Haha” reactions ensued.

The post, of course, refers to the fact that because of the coronavirus pandemic, students are not attending classes in-person and are instead learning from home. This homebound engagement is true for pretty much every other public institution, including Catholic churches. Parishes across the Archdiocese of Denver are having to adapt to a temporary reality where Masses are empty.

Thankfully, that aforementioned creativity, strong communities and a little help from the internet are making it possible for parishes to still serve the faithful in plenty of ways. For many parishes, this means something as simple as livestreaming Masses for the faithful to participate in from home.

While it’s impossible to replace being physically present in the Mass, many seem appreciative and grateful for the opportunity to still engage with the sacred liturgy from afar.

“So grateful to have a Parish Staff that has responded to the current situation and found ways to continue offering sacraments and ministry,” wrote Jodee Hinton on Our Lady of the Valley’s Facebook page. “It was very special and much needed for my family to watch Mass today. My kids loved being able to see what actually happens on the altar.”

“Thank you Father, miss you and sharing Christ with you in person, but we will be with you soon with the help of Jesus Christ. Stay strong and safe,” wrote Judith Ann Aerne on Holy Cross in Thornton’s Facebook page. 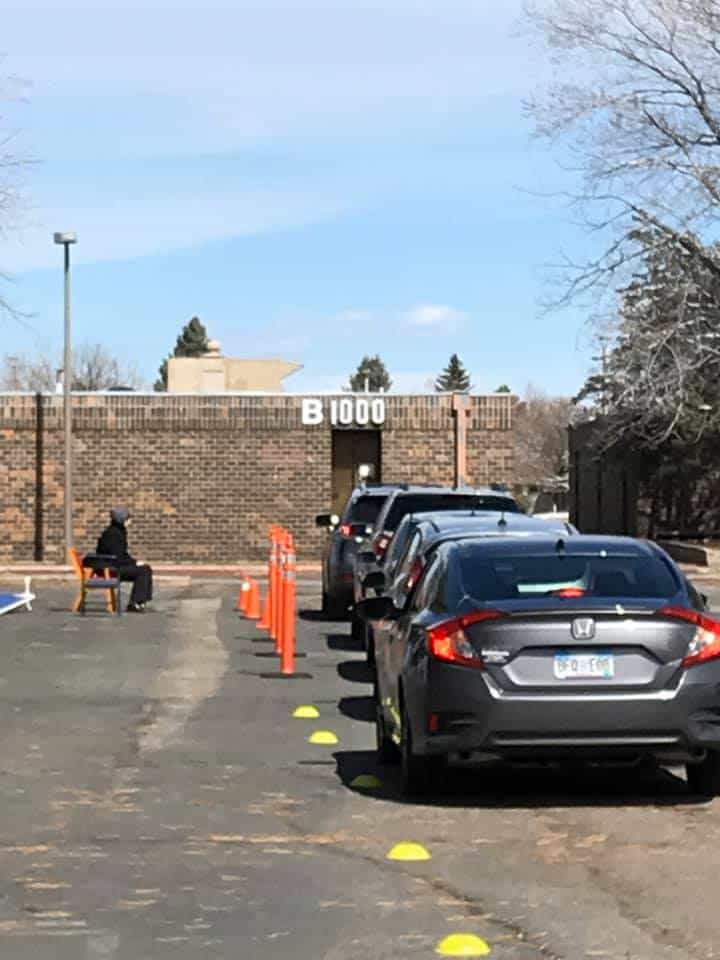 Parishioners in their cars line up in the parking lot of Queen of Peace Parish in Aurora to have their confessions heard. Parishes are finding creative ways to offer the sacraments to the faithful while stay-at-home and social distancing orders are in place. (Photo provided by Queen of Peace)

Other parishes are also finding ways to continue providing other sacraments to the faithful. Queen of Peace Parish in Aurora, for example, has launched drive-through confessions on Saturdays to ensure people still have the chance to receive to the Sacrament of Reconciliation, and they’re not the only parish to do so. It’s just one of the ways that they’re able to stay connected to their parishioners while their doors are closed.

“Since they can no longer gather here, we’ve tried to go to them,” said Queen of Peace pastor Father Felix Medina. “We’ve stayed busy. We livestream at least three liturgies a day: Morning Prayer and Adoration in the morning, English Mass at noon and Spanish Mass in the evening.

“I think it’s important for people to know that the Church is still open and it’s more present than ever before, that we will not be silenced, that we won’t stop reaching out to people now,” Father Medina said.

And by reaching out, Father Medina doesn’t mean that figuratively. Queen of Peace and other parishes such as Assumption in Welby and St. John the Baptist in Longmont have been calling their parishioners one-by-one to check in on them and see if they can help with anything.

“We’re essentially asking three basic questions: one, how are you doing; two, do you need anything; and three, can we pray with you?” Father Daniel Ciucci of St. John the Baptist said in an interview with Fox 31. 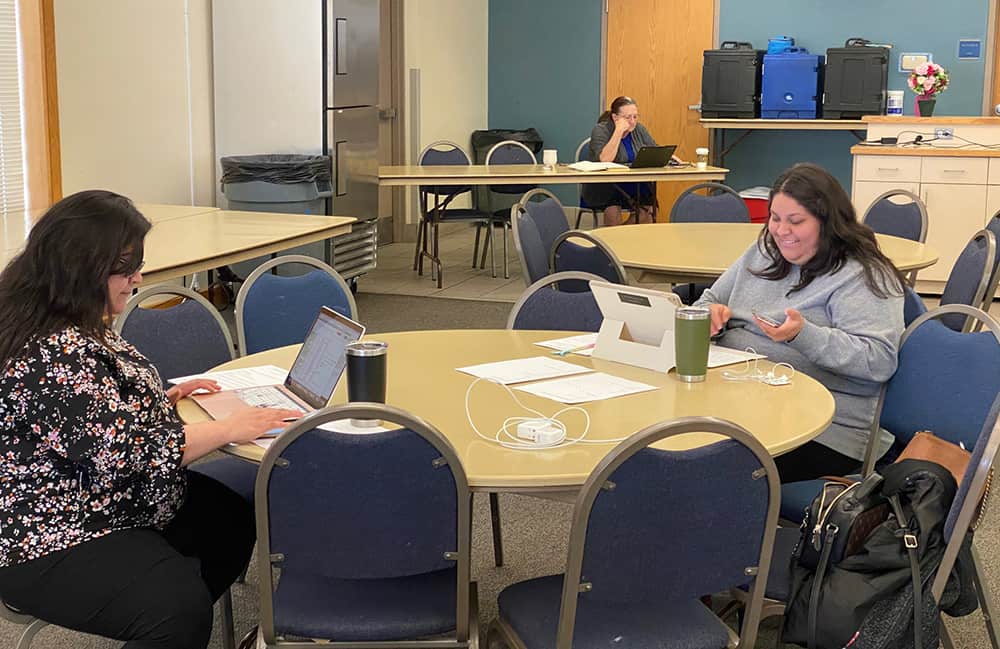 Volunteers at St. John the Baptist make phone calls to check in on parishioners. Outreach from parishes has taken on a whole new meaning during the coronavirus outbreak, and they’re finding ways to rise to the occasion. (Photo provided by St. John the Baptist)

“As priests, we’ve maintained a life of prayer, but we’ve also been calling our parishioners,” Father Medina said. “We each try to call 50 or 100 a day. They’re very happy to hear us checking in on how they’re doing and how their family’s doing and whether they need anything – especially because we know some of them are lonely and are having a hard time.”

Of course, there’s a whole lot more that parishes do besides offer Mass, and they’re finding ways to keep those things going too. Nativity of Our Lord in Broomfield is offering assistance to parishioners who need it, whether it be delivering groceries or seeing a priest; Risen Christ in Denver is continuing its partnership with Food Bank of the Rockies and doing drive-up food distribution; youth ministers across the archdiocese are doing virtual youth group nights via Zoom. And that’s just scratching the surface.

The parishes of the Archdiocese of Denver will continue to find innovative and creative ways to serve the faithful through all of this. However, they need the vital support of their communities to do so. Many parishes have online giving portals set up through their own website, but you can also visit passthebasket.org to give to any parish in the Archdiocese of Denver.

Vladimir Mauricio-Perez contributed to this report.