Four reasons to believe in the Real Presence 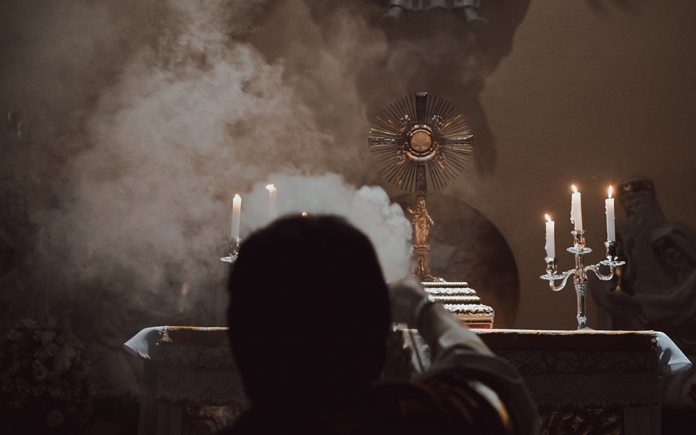 “Wait, what?!” I exclaimed, interrupting my youth minister midsentence, “I don’t get it. Jesus is in there?” The poor girl merely suggested I go pray with Jesus in the adoration chapel, and I about lost my mind. How in the world could I go pray with Jesus, and what was an “adoration chapel”? It made no sense. “Well,” she explained, “you know how at Mass we receive the Body of Christ in the form of bread and wine? Sometimes the priest keeps a host from being consumed so he can place it in a glass case, and then people can come to pray with Jesus in the Eucharist. You know the bread is actually Jesus’ physical body and not just a symbol for it, right?” Nope. That one was news to me. I still have no idea how I missed it, but on that day over 20 years ago, my relationship with Jesus changed forever.

When the Catholic Church teaches that the unleavened bread at Mass changes into the Body of Christ, that statement is mean to be taken literally. Through the power of the Holy Spirit, a priest consecrates and transforms simple bread into the flesh of Jesus at each Mass — as in the very same flesh that walked on this earth and died on the cross 2,000 years ago.

I’ll be honest, when I first heard this truth, it was a lot to take in, but ultimately, four reasons to believe won me over.

Three of the four gospel accounts (Mt 26:26-29; Mk 14:22-25; Lk 22:14-20) tell the story of the Last Supper when Jesus holds bread and wine in his hands, saying, “This is my body” and “This is my blood.” If Jesus wanted his words to be understood symbolically or spiritually, he could have said something like, “this represents my body,” but as it is, he gave no such qualifier. The bread and wine were his physical flesh and blood. In no other place is this intention clearer than in John 6, which foreshadowed his actions at the Last Supper.

The day after Jesus fed 5,000, those present chased him down asking for more of his magical food. He responded by telling them, “I am the bread of life… he who eats my flesh and drinks my blood has eternal life” (Jn 6:35, 54). Rightly confused — and likely disgusted by this graphic image of consuming human flesh — many began to walk away. Yet, rather than clarify his teaching to mean something easier to digest (pun intended), he lets them go. Why? Because he meant what he said when he said, “For my flesh is food indeed, and my blood is drink indeed” (Jn 6:55).

2. It’s what the early Church taught

Immediately after Jesus’ ascension, the Bible documents his followers “breaking bread” (Acts 2:42, 46 and 20:7, 11) as a part of their communal life. Here we see that from the beginning, the Eucharist was central to the Christian life. And while these Biblical references do not directly declare the Real Presence of Jesus in the Eucharist, several non-Biblical writings from the early Church leave no question as to where she stood on the matter.

Between 80-110 A.D., St. Ignatius of Antioch, the third bishop of Antioch, addressed those who denied the Real Presence by writing, “They abstain from the Eucharist and from prayer, because they confess not the Eucharist to be the flesh of our Savior Jesus Christ, which suffered for our sins, and which the Father, of His goodness, raised up again” (Letter to the Smyrnaeans, 7). Or in 148-160 AD, St. Justin Martyr wrote, “This food we call the Eucharist… from which our flesh and blood are nourished by transformation, is the flesh of that incarnate Jesus” (First Apology, chapter 66).

These are but two examples of hundreds that can strengthen our trust in the Real Presence. In fact, in every century, you can find such proofs because there has never been a time when the Church did not profess the Eucharist to be the physical body and blood of Jesus.

3. It’s still being revealed through miracles

Knowing that people would question Jesus’ physical presence in bread, God continually makes the truth of the Real Presence known through Eucharistic miracles. Over the centuries, hundreds of Eucharistic miracles have occurred. From St. Catherine of Siena sustaining herself on nothing but the Eucharist to St. Clare of Assisi driving away an army with nothing but a consecrated host, God has proven the power of the Eucharist.

However, perhaps the most powerful among these miracles are the instances when a consecrated host turns from the appearance of bread into actual human flesh and blood. Naturally, the Church takes claims of this sort seriously and thus conducts extensive scientific research to confirm their validity. The results of these studies are astounding.

Although these hosts date from as far back as 750 to as recent as 2013, the blood type of each host is always AB, and the flesh is always tissue from the left ventricle of a human heart. Scientists cannot explain the phenomenon, but for those who believe, it’s a confirmation that Jesus is indeed present in the Eucharist.

The depth of God’s love for you is unfathomable. He is the God of the Universe who creates everything and holds all in existence, and at the same time, he hides in the form of simple bread.

Why? Because he desperately wants to be with you.

He wants to accompany you in this life filled with joys and trials. He wants to be physically present to you in times of celebration and suffering. This is why he waits for you in the tabernacle, adoration chapel, and the Holy Sacrifice of the Mass… so he can be with you. God has never promised us perfect lives, but he did promise that he would be present in the imperfect. The next time you need him, remember that promise. Remember our God whose Real Presence is, and always will be, with us. 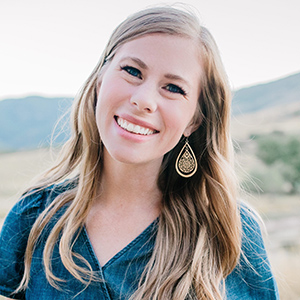 Lisa Cotter
Lisa Cotter is a leading Catholic speaker and author known for her practical insights on relationships, femininity, and living life with excellence. She served with FOCUS missionaries for over 10 years, created and hosted the popular “How-to Catholic” podcast, authored Dating Detox and Reveal the Gift, and has traveled widely as a presenter at SEEK, Steubenville conferences, NCYC, and more. Lisa resides in Denver, Colorado, with her husband, Kevin, and their four children.
RELATED ARTICLES
Around the Archdiocese