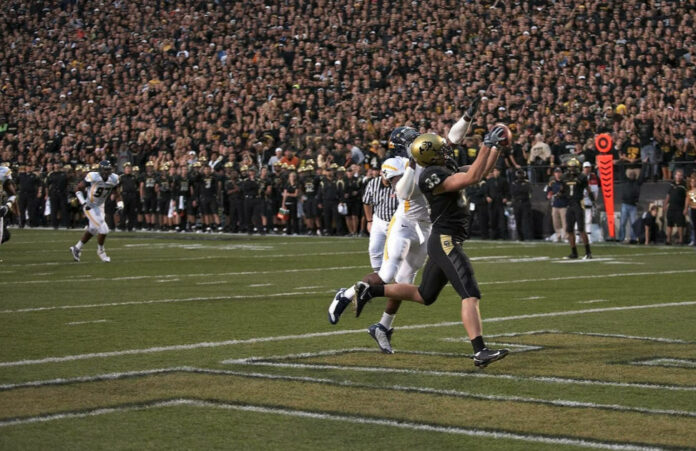 As a tight end on the University of Colorado football team, Patrick Devenny was never afraid to be public about his Christian faith.

“I was the guy that would always run out of a tunnel before the football game, take a knee and say a prayer,” Devenny said. “But my prayer was always, ‘please let me score a touchdown pass and keep me healthy.’”

Devenny grew up in northern California, raised mostly by his mother after his parents divorced. He said his grandmother was devoutly Catholic, which inspired his faith as a young adult.

“It always felt like the right thing to do, but I never really knew why I was doing it,” Devenny said. “Whatever it was, it was more of a one-sided relationship. ‘What can I get from God?’ ‘How can he help me reach the NFL?’ …that kind of stuff.”

Christian groups were popular among the CU athletes according to Devenny, but he recalls feeling like they were a bit superficial. He said he also became intensely focused on worldly successes, and how he could create them for himself. He said his motto became, “If it’s meant to be, it’s up to me.”

“I became obsessed with psychology of the mind and sports psychology,” Devenny said. “So, removing God, and now it’s me. And if I want my own destiny, I’ll go get it. How can I be the creator of my own destiny?”

Devenny enjoyed a successful football career at CU, playing in 29 games and scoring six touchdowns from 2007 to 2009. He wasn’t selected in the 2010 NFL draft, but he was invited to off-season workouts with the Seattle Seahawks.

Devenny was cut from the roster before the season though, and a training injury held him out for several months. It ended up being the end of his football career as no other calls ever came from the NFL.

It was also the start of some challenging years of his life as he struggled to find his identity, while still chasing worldly success.

Devenny had jobs in commercial real estate and the entertainment industry, living a fast-paced life in Los Angeles and later a couple of years in Mexico.

But Devenny said he continued to compare his life to others around him, and any success he had always ultimately left him feeling empty and wanting more.

“I had about five years of just extreme depression, highs, lows, eating disorder, all of it.” Devenny said. “But it felt like if I could achieve worldly success, I could solve any of those issues.”

And then in 2015, his mom unexpectedly passed away.

“I just hit a huge spiral,” Devenny said. “I became super depressed, with suicidal thoughts, eating disorder went through the roof. I felt like there was so much uncertainty in my life that the only thing I could control was how I looked.

“That’s when I started to question – what does the private plane matter? What would it have changed? My mom passed away in her sleep. I don’t know if that would have been solved by living in a mansion.”

Devenny moved back to Denver at that point, and eventually reached out to some friends he looked up to, who independently all pointed him in the same direction.

“After the fourth one, I was like, ‘are you guys all talking to each other?’” Devenny said. “They all were pointing back to God.”

Devenny listened, and at the encouragement of one of his friends reached out to a former coach, who insisted Devenny go home and read Romans 8:28: “We know that all things work for good for those who love God, who are called according to his purpose.”

Devenny said those were the first seeds of returning to a life of faith.

“I started to realize what I was actually missing in life, and it wasn’t that private plane, it was my relationship with God,” Devenny said. “It’s not about me and my plan, but it’s God’s plan and there’s a bigger plan.”

Devenny said at first he was drawn to some of the big Christian churches with rock music, fog machines and passionate speakers.

“You go through a tunnel of people greeting you, then you go over, you get your coffee and donuts, you go sit down, the music’s great,” Devenny said. “It’s pretty hard to find something not to like.”

But then Devenny met his future wife, Stephanie, a Catholic and former FOCUS missionary, and they started going to different services together.

“I thought I was going to convert her,” Devenny said. “Every time I would think to myself, ‘I’m going to win this.’”

That is, until he met Father Brian Larkin at Our Lady of Lourdes.

“After the first meeting, I knew I was in trouble,” Devenny joked.

Devenny said Father Larkin would ask him questions that eventually made him realize he had been approaching his faith the same way he had approached most of his life.

Devenny said he still had his questions and concerns about the Catholic Church, but after experiencing how fleeting things are in this world, was drawn to the permanence of the Church and a closer relationship with Christ.

“Seeing my mom pass away unexpectedly and seeing my dad have cancer and all these things where life was ripped away, the only constant in that entire scenario is God, right? And having that relationship,” Devenny explained.

Devenny said he has nothing bad to say about the other churches he initially attended, but that he just found more in the Catholic Church.  He went through RCIA and was confirmed in 2019.

“There’s so much history, truth and beauty in all of what the Church teaches. Everything was the opposite of everything I was used to from the sense of I’ve always lived for that instant gratification. And there was such a beauty – even through the six-month RCIA program – of the wait,” he concluded. “And it has a bigger payoff than just what can God provide for me now.”

Mark Haas
Mark Haas is the Director of Public Relations for the Archdiocese of Denver.
RELATED ARTICLES
Local