The forgotten truth of Catholicism: A love story 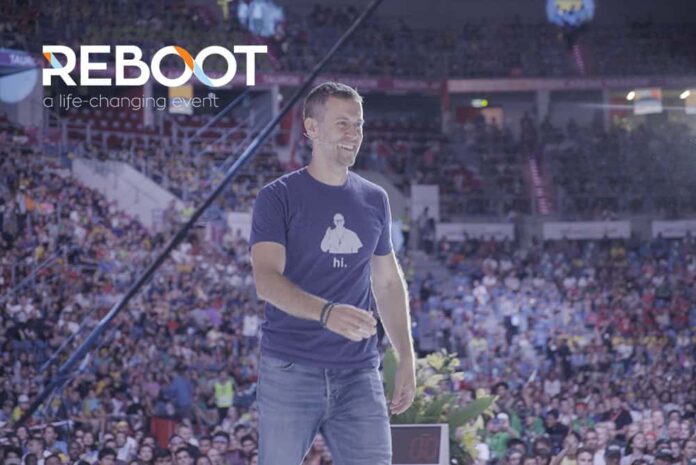 Pope Francis has been quoted as saying that the Church is a love story, and that it’s only in the path of love that it can grow. Reboot! Live!, an evangelization ministry of Chris Stefanick’s Real Life Catholic organization, gives root to this path.

Stefanick has garnered a reputation as one of Catholicism’s most fervent young speakers and authors, traveling all over the country and leading people to Christ with his exuberant and relatable style of preaching the Gospel. According to Real Life Catholic’s website, over 90,000 were brought to closer friendship with God last year as result of his events.

With Reboot! Live!, the goal is as simple as the Gospel message.

“My message is very simple. It’s the initial proclamation of the Gospel: That God loves us, he created us for himself, he calls us to relationship with himself, and I also focus on how to live it out in practical ways every day.”

At first glance, Reboot! Live! most closely resembles an evangelical event, due to its high-energy nature and its emphasis on the relational heart of Christianity. As Catholics, Stefanick said it’s easy to forget that a relationship with Christ is first and foremost what Christianity is all about.

“There’s so much that comes from that relationship – so many beautiful rituals, so much history, so much theology, so many doctrines – that it’s easy for people to get lost in that and forget where it all comes from,” he said.

Stefanick recounted how he’s heard testimonials from people who attended one of his events who had never heard Catholicism described as a relationship before. He said a lot of people don’t often think of Catholics as being the ones to invite people into relationship with Jesus, a problem that Denver’s very own Archbishop Samuel J. Aquila is addressing when speaks about having a personal encounter with Christ.

“How did that happen? This is the message we have to reclaim as a Church,” he said. “There’s this foundational reality about Catholicism that we presume people get, and they don’t. When they get it, the rest of Catholicism makes sense.”

Because evangelization starts primarily in the parishes, Stefanick wanted to make sure that if a parish hosted him, it was as big a win as possible for them.

“Really, what we’re doing is leveraging my ability to convince people of the Gospel and using that as a catalyst for parishes to get more excited about evangelization in general,” he said.

Prior to a parish hosting Stefanick for an event, the Real Life Catholic team works with the parish over a six-month period to teach them how to get as many people as possible back to church. This includes training outreach teams and equipping them for ongoing evangelization efforts, long after the event is over.

“Even in small towns, we’re seeing 1,000 people come out, many of whom don’t usually come to church,” he said.

A typical Reboot! Live! event lasts two and a half hours and consists of two parts. The first part is an unpacking of the Gospel in an inspirational and high-energy way. The second part offers practical ways of applying the Gospel to everyday life.

The Gospel may be 2,000 years old, but its message is as relevant today as it was then, Stefanick said, which is why he believes the proclamation of the Kerygma is as important as ever.

“This is the message our hearts are made for, and it has the power to change lives,” he said. “It’s the best news ever.”

Is your parish is interested in hosting a Reboot! Live! event? Be sure to visit reallifecatholic.com for details on how to make that happen.