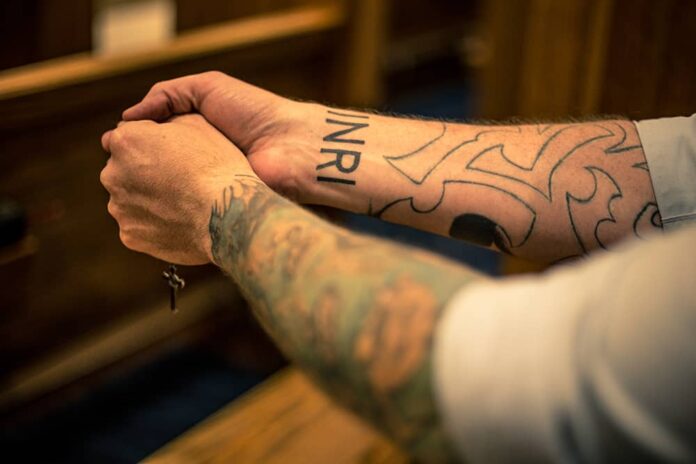 So goes one of an array of responses when a discerning young person tells their parents they want to get a tattoo. “Why would you want to do that to yourself?” is a safe follow-up.

It’s a good question to ask. Why do people get tattoos? And another: What does the Catholic Church say about getting tattoos?

“I think when anyone is getting a tattoo, and especially a Catholic, [they] should be mindful of, ‘Is this respectful? Is this in any way demonic, lewd or crude?’” said Father Joseph Lajoie, parochial vicar of Light of the World Parish in Littleton. Father Lajoie has five tattoos himself, the most recent of which was done in June. He added an “M” as seen on the Miraculous Medal to a cross he has on his shoulder, symbolizing his Marian devotion as a priest.

“Since I consecrated myself to Our Lord through the Miraculous Medal of Our Lady, I wanted the image in the back, kind of in my own style, as that Marian tattoo,” Father Lajoie said. “For me, it’s a way of having in my flesh a pointing towards the scapular and the Miraculous Medal.”

You read that right: Father Lajoie, a Catholic priest, has five tattoos.

Many opponents of tattoos, especially those who are Christians, often cite Leviticus 19:28 as explicit instruction by the Church not to get a tattoo: “Do not lacerate your bodies for the dead, and do not tattoo yourselves.” So, tattoos are forbidden?

I think when anyone is getting a tattoo, and especially a Catholic, [they] should be mindful of, ‘Is this respectful? Is this in any way demonic, lewd or crude?’”

Not so fast. This instruction to the Israelites from the Book of Leviticus refers to an ancient Canaanite practice of tattooing the names of the deceased on one’s body as a form of mourning. The Israelites were forbidden by the Lord from doing this because this was considered a pagan practice. Another important distinction to make is that this command was part of the Mosaic Law passed down to the people of Israel, which was part of God’s Old Covenant with his people. As Church history teaches, the Old Covenant was rendered inapplicable once Christ established the New Covenant through his crucifixion.

So, tattoos aren’t bad? From a moral standpoint, no. There is nothing immoral about getting a tattoo. In fact, a Christian tradition of tattoos can be dated back to as early as the 6th century. Early historians have recorded stories of Christians tattooing themselves with crosses in the Holy Land. This tradition likely stems from the words of St. Paul in his letter to the Galatians, when he writes, “From now on let no one make troubles for me; for I bear the marks of Jesus on my body.” While many biblical scholars argue that Paul is speaking metaphorically here, he is also likely referring to the ancient Roman and Greek cultural practice of marking slaves with tattoos to show whom they belonged to.

Not even the Catechism contains an explicit reference to tattoos. However, while the Church doesn’t have an official teaching on tattoos, those considering getting one should still heed the Christian virtues of temperance, charity and prudence.

People are sometimes shocked that a priest would have a tattoo, but Father Lajoie explained that it can sometimes be used as an opportunity to speak humbly about his own sinfulness, and even for evangelization.

For some people, these things that ‘normalize’ a priest make people more willing to approach them and begin asking questions.”

Father Lajoie also pointed out that his tattoos make him more approachable to those who might otherwise avoid any sort of conversation with a priest.

“For some people, these things that ‘normalize’ a priest make people more willing to approach them and begin asking questions,” he said.

Early on, Father Lajoie’s inspiration for his tattoos came from his love of music – the band U2, in particular. The act of getting a tattoo brings with it an element of putting an important part of your personality on display for all to see, and while Father Lajoie conceded that his desire to get a tattoo was partially motivated by this, it was a mark that also bore a deeper meaning for him and his Catholic faith.

“In some ways, as Catholics, since we’re sacramental people, the desire to want a physical symbol and reminder of something that’s deeply impacted your life…I think in some ways that touches upon us as Catholics who have the sacraments,” Father Lajoie explained.

Tattoos are, of course, not sacramentals, he clarified, but just as the sacraments are physical expressions of invisible realities, tattoos are physical symbols that say something about who we are and what has impacted us in our lives.

“When something has happening in your life that’s not physical, but you’ve gotten through it, or is very important and meaningful to you, to have a visible symbol and reminder and image of that touches upon our desire to wear that out there,” said Father Lajoie.