For 25 years, Steubenville of the Rockies has impacted teenagers and volunteers alike 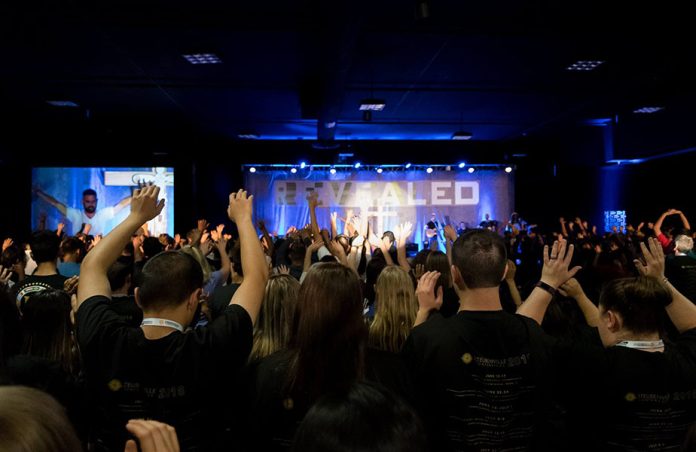 The joy of over 1,700 teens at the Steubenville of the Rockies Conference became palpable once more as the event celebrated 25 years of helping young people encounter Christ. And though the speakers encouraged all participants to be “fearless” in living out their faith in the world, the example of such bravery was perhaps embodied most by the countless volunteers who through sacrifice and toil have made the conference a reality from the beginning. When asked about their service, these volunteers will say that the exhaustion of the weekend dwindles in comparison to the blessings God bestows on them in the process.

Such has been the case of Deacon Mark Wolbach and Theresa Rounds — and their families.

When Deacon Wolbach was asked to take over the liturgy aspect in 2013, his wife and children saw it as a family mission, and so they joined the vast number of volunteers that make the Steubenville Conference a reality.

“[My children] already knew about the conference because they were participants years ago in high school. They saw that mom and dad needed help, that the conference needed more volunteers, so they said yes. They have servants’ hearts, so it was a natural progression,” Deacon Wolbach said.

For nine years, the whole family has been serving in various roles. His son Patrick has lent his audio-visual skills. His daughter Maureen, who is a registered nurse, has helped with first aid and liturgy. And his son Daniel, a former seminarian, is now leading the vocations branch of the conference.

Deacon Wolbach feels greatly blessed by the opportunity to serve with his family and has clearly seen how the event has brought them closer together and helped them evangelize by witnessing through their actions. Nonetheless, he doesn’t consider his family’s involvement and desire to serve God as a lucky incident. The process began long ago in their home by helping their children to open their hearts and respond to the Holy Spirit through service from a young age.

“My children were altar servers at Light of the World even before I went into diaconate formation, and my wife Mary and I have been sacristans, extraordinary ministers of holy Communion, and we were in charge of the altar server program at our parish. So I guess we are a service oriented family,” he said. “I think it is important for parents to teach their kids about service at a young age because it is hard to teach them when they are teenagers. Every parish in the archdiocese has room for people to give of their time. The archdiocese and all of us are supposed to be on mission to evangelize and bring people to the Church in the faith. But to do that we have to plant the seed at an early age and cultivate it through the years.”

That service has expanded, and even the spouses and in-laws of some of their children have joined the mission by serving in the conference.

In a similar way, Theresa Rounds and her family have been deeply blessed by their service in the Steubenville of the Rockies Conference. Theresa has participated in every single conference, except for the very first one, creating all the event banners by hand, something unique among all other Steubenville Conferences. Furthermore, she has participated in the areas of environment and has been on the archdiocesan committee for the event.

“I do a few different forms of art on my own, so it was easy to say ‘yes’ to God when I was asked to contribute [24 years ago],” Rounds said. “I really like to paint the banners during Lent as part of my Lenten journey as a reminder of who I’m doing it for. It has always felt like a unique way to share my talent with my faith. It’s been a great way to serve God and to grow every year in unexpected ways. As you grow to serve, you find yourself being served.”

Through her service and that of her whole family, she has seen how drawing her kids, Adam, Jordan and Kelsey, to get involved since graduating from high school has deeply impacted their faith journey.

“The conference played a huge role in my kids during their teenage years. My daughter Kelsey and her husband are still volunteering, and all my six grandkids are being raised in the faith and are active, so that’s huge for me,” she said.

Throughout Rounds’ many years of service, her walk of faith has also been marked by the sign of the cross, and yet God has found ways of extending his blessing in the midst of life’s most difficult moments. One of such moments was the loss of her son Jordan to cancer 12 years ago.

“At one conference, as I was clearing the venue, a group of kids came up to me and asked me, ‘What is this thing called adoration? How do you know it’s God talking to you? How do you hear God?’ I mean, just these profound questions,” she recounted. “And I sat down with them, and we talked for an hour. I was fresh off losing my son, so I was vulnerable enough to share with them how, at first, I was angry at God and questioning, but then realized that without him I couldn’t endure the journey through the grief. And I just saw these kids’ jaws dropping.

“After listening to them, it made me sad that they didn’t have anybody willing to be that vulnerable with them about what it is to truly live the faith beyond learning the prayers, about how to allow God to be that real in your everyday life with truth, honesty, and pain. And so I thought, ‘Okay, God, that was another reason you brought me here this weekend.’”

One only need to approach a volunteer, like Deacon Mark and Theresa, to hear numerous stories of how they have seen Christ transform the lives of teenagers through the Steubenville of the Rockies Conference in its 25-year-long history. And yet, most revealing of all is the fact that their very own testimony will be interwoven with these, for in those sacrifices of service they have themselves been touched by God in a profound way.