Focusing on the End during Advent 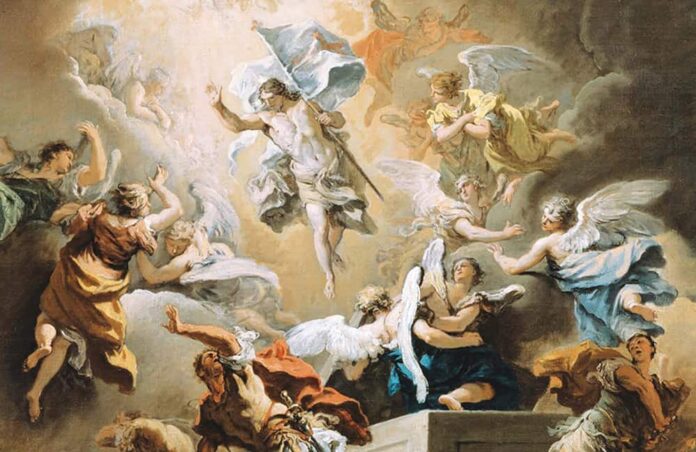 Advent focuses on three comings of Christ, according to St. Bernard: “In the first coming he was seen on earth, dwelling among men; he himself testifies that they saw him and hated him. In the final coming all flesh will see the salvation of our God, and they will look on him whom they pierced. The intermediate coming is a hidden one; in it only the elect see the Lord within their own selves, and they are saved. In his first coming our Lord came in our flesh and in our weakness; in this middle coming he comes in spirit and in power; in the final coming he will be seen in glory and majesty” (Sermon 5, In Adventu Domini).

By focusing on the coming of God into the world at Christmas, we should also realize more fully our need for Christ right now. He should be born in us more fully during Advent and Christmas. These two comings, however, point us to the fullness of time when “Christ is all, and in all” (Col 3:11). The first two comings are meant to bring us to the full union with God that will only happen at the end of our lives. Death becomes a new birth, and also, perhaps surprisingly, a cause for hope.

Scott Hahn’s new book, Hope to Die: The Christian Meaning of Death and the Resurrection of the Body (Emmaus, 2020), looks at how Christ transformed our understanding of death and how the Church has honored the physical human body. Death was a great mystery in the ancient world, including the Old Testament. God slowly revealed his plan in salvation history to remake all creation, including the human body. Jesus’s own resurrection powerfully confirms this, showing that the human body has a place in eternal life, rather than simply being cast off upon death. Jesus spoke often of the resurrection, but Hahn clarifies that “it’s not Jesus’s own Resurrection about which he talks the most. The resurrection that he is far more concerned with is ours” (57). Jesus came not only to save us; he wanted to remake us for eternal life. As the Church awaits the resurrection of all the dead, she honors the dead, caring for the deceased body and venerating the relics of the saints.

Returning to the second coming described by Bernard, this happens most fully in the Eucharist. In fact, receiving the Eucharist becomes the source of the transformation of our own bodies, enabling them to share now in Christ’s resurrection. “It is through this mysterious exchange of grace that the Eucharist becomes the instrumental cause of our resurrection. It works in our souls as both food and medicine, feeding us with God’s life, healing our souls of the effects of venial sin, and making us, day by day, into saints … Lastly, it is the Eucharist that imbues our mortal bodies with the capacity to be divinized and gloried and resurrected in the Body of Christ” (77-78). In the Eucharist, the goal, the final coming, is already made present to us and prepares us for everlasting life.

Because Jesus transformed death, we treat the body as something sacred both in life and death. Christians do not view the body as a temporary shell that is cast off at death. To be a human being is to be a body-soul unity forever. After the resurrection of the body, “your body will still be your body and you will still be you. The same soul you have now will once more be united to the same body (albeit resurrected and glorified) that you have now” (94). With this goal in mind, Christians have always buried the body with reverence, refusing to burn it or treat it with disrespect. Although cremation has quickly become normal, and the Church has tolerated it without approving it, Hahn fears it may signal a devaluing of the body and its importance, even after death. “Cremation teaches people lessons about the body that are directly contrary to what the Church actually believes. It teaches that the body is disposable. It teaches that the body is not an integral part of the human person. And it teaches that the body has no value once the soul is gone — that the body has run its course, and there will be nothing more for it. No resurrection. No transformation” (154). Hahn calls us to return to traditional practices of burial and honoring the dead, which would testify to our beliefs about death and the resurrection.

Christmas is a perfect time to think about the body and its destiny. God becomes man in the incarnation, forever uniting himself to our life. His entrance into the world calls us to prepare for our end, our everlasting destiny. Hahn points out that there are two different types of life and death — one related to body and the other to soul (16). God redeemed us as a whole person, both body and soul, but he wants us to live in the body in a way that testifies to the preeminence of love and eternal life with God, not fearing bodily death, but death to the soul. In the Church’s wisdom, she points us to the third coming of Christ during Advent. In our prayer, let’s focus on the great gift that Christ brings to us at Christmas: a resurrected and perfect life with him in heaven, truly alive in both body and soul.