His Church. Our Experience.
Subscribe
HomeLocalFinding the man on the cross
Local

Finding the man on the cross 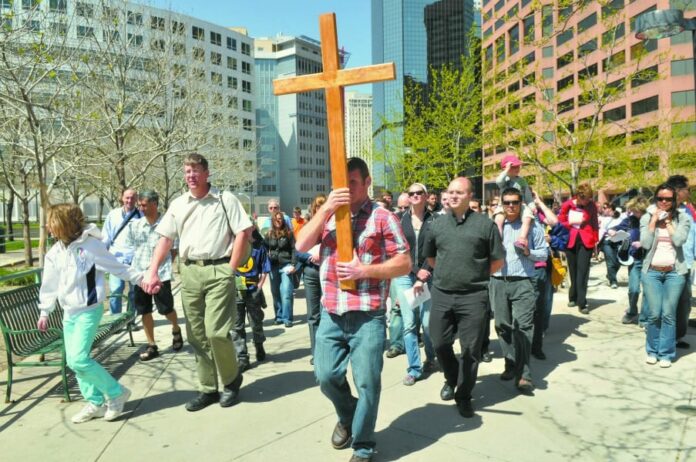 The crowd gathers before the imposing Capitol building to follow the lone man carrying the simple wooden cross through Denver’s well-trodden downtown streets and steely skyscrapers. Windows reflect the prayerful countenance of the group who recalls the Way of the Cross on Good Friday.

“It’s a way of being drawn into that mystery on Good Friday,” explained Father Michael Carvill, who leads the Communion and Liberation movement that organizes the annual walk. “It’s an act of response to the love of Christ.”

Observers on the city streets are known to express their own response to the cross. Some join and express praises. Others raise their voices in anger.

“As we walk through city parks and streets, there are people who yell and hurl a few insults. We always get that reaction, too,” said the priest of the Priestly Fraternity of the Missionaries of St. Charles Borromeo and pastor of Nativity of Our Lord Parish in Broomfield.

The claim of Christ on the cross is a sharp sword that modern man tries to understand, he said. Historical evidence is explored on TV series, and books are published to depict the characters surrounding the day some 2,000 years ago that a man named Jesus of Nazareth was crucified on a cross, and rose.

CNN’s latest six-part mini-series “Finding Jesus: Faith. Fact. Forgery.” will culminate on Easter Sunday with an analysis of little-known manuscripts. The show included local Augustine Institute professor Tim Gray who weighed in on several episodes that explored Jesus through contemporary science and ancient artifacts like the true cross and Shroud of Turin.

In one part, John Jackson of the Turin Shroud Center of Colorado explains the shroud that bears an image of a crucified man.

“When we come to the frontal image we see what looks like blood strains that are coming from essentially punctured-type sources,” Jackson says. “They correspond to what the Gospels tell us happened to Jesus—the crown of thorns.”

Christ and the Biblical events following his death are also explored in a dramatized series called “A.D. The Bible Continues” that airs on NBC. The show continues the previous “Bible Series” and depicts the apostles and aftermath of the crucifixion of Jesus. This 12-week series begins on Easter Sunday.

“The immediate aftermath of Christ’s death had a massive impact on his disciples, his mother, Mary, and key political and religious leaders of the era, completely altering the entire world in an instant,” the network describes the show.

Award-winning Catholic writer Mike Aquilina wrote a companion book, released this month, called “A.D. The Bible Continues: Ministers & Martyrs” to give viewers a deeper understanding of the apostles and help others understand the historical significance of Christ’s sacrifice.

“It gives people something they can talk about again with their neighbors, with their co-workers, with their family members and maybe especially those who are skeptical,” he said. “They may think of (Jesus) as George Washington or Abraham Lincoln. He’s another one of those people who maybe show up on coins or stamps. ‘We know they’re really important, and we probably took a history test on it at some point, but how does he affect me now?’”

“We can’t just put the people in the room and turn on a video and expect them to be converted.”

The TV shows are an opportunity to start a conversation and friendship with others who may be “works in progress” in understanding Christ’s sacrifice, as Peter was in the Gospels, he said.

In response to man’s longing to understand, the key is not to show a set of facts but to live the love Christ had for humanity by dying on the cross, Aquilina said.

“They have to see what we have is not just a philosophy, not just a set of principles, but rather it’s a friendship we have with Jesus Christ. I think that’s the only way the faith will be credible,” he said.

“I think we need to produce, propose and expose the life we live as Catholics,” he explained. “I really do think that practical attention to people is by far the most effective method of beginning a conversation—just helping someone out in a moment of difficulty; just listening to somebody.”

With a loving gaze, modern man may begin to meet the person who rose from the cross and lives.

“When you find somebody who looks at you with a gaze that’s really and truly gratuitous, it can only be borne if they belong to Christ. It surprises people and it attracts people,” Father Carvill said. “The Church community is the bearer of the living Christ encounterable and capable of being followed today.”

Way of the Cross
When: noon April 3
Where: start at the Capitol between Broadway and Lincoln Street, ending at the Cathedral Basilica of the Immaculate Conception.
Details: Facebook event