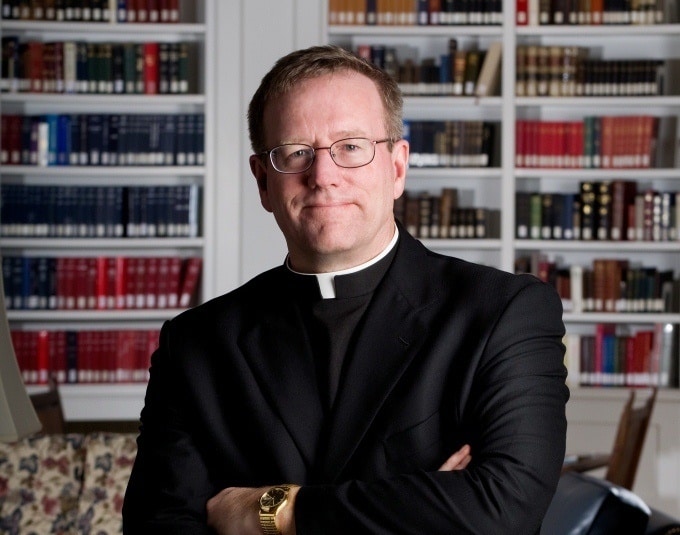 A documentary recently released by Father Robert Barron of Word on Fire ministries, “Catholicism: The New Evangelization,” is the second installment of the noted “Catholicism” series launched two years ago.

“It’s really quite different,” Father Barron said of the film in a phone conversation with the Denver Catholic Register from Mundelein Seminary near Chicago where he serves as rector and president. “The first one was a globe-spanning 10-part look at the whole of Catholicism, while this is more of a standard type documentary… looking at this whole issue of new evangelization: What does it mean? Who’s doing it? How do you do it?”

The first release, simply titled “Catholicism,” told the story of the faith using art, architecture, literature and music. The new film demonstrates practical ways Catholics are putting their faith into action in today’s increasingly secular world where the number of people with no religious affiliation has tripled in 30 years, and self-described atheism has increased 500 percent in the last 10 years.

“Catholicism: The New Evangelization,” released Sept. 3, is a 90-minute documentary hosted by Father Barron that begins with the definition and history of the new evangelization—from the Second Vatican Council and Blessed John XXII, through Pope Paul VI, to Blessed John Paul II. It then takes viewers on a tour to witness examples of “new ardor, new expressions and new methods,” as described by John Paul II.

Portions of that tour include Father Barron’s travels while rolling out the “Catholicism” series, primarily in Australia, England and the United States.

“I went to (Australia and England) for two weeks and … brought the film crew along,” he shared. “I said ‘Let’s just film some of my talks then we’ll film Church leaders and talk to people on the ground and see what’s happening.”

That’s how the documentary coalesced, he said.

The film showcases individuals and groups proclaiming the Gospel with creativity and innovation, such as global outreach with new media tools. Father Barron is well-known for his use of new media, reaching millions through Word On Fire where he posts homilies, commentaries and studies. More than 300 cultural commentaries he’s posted on YouTube have received more than eight million hits.

In addition to interviewing active young Catholics, the crew also spoke with notable Church authorities such as New York Times columnist and author of “Bad Religion: How We Became a Nation of Heretics,” Ross Douthat; University of Notre Dame professor and author of “The Unintended Reformation” Brad Gregory; and Denver Catholic Register syndicated columnist George Weigel, Distinguished Senior Fellow of the Ethics and Public Policy Center in Washington, D.C.

“I’ve known George for a long time, we’re colleagues on NBC (News),” explained Father Barron. “I’ve admired him for a long time as one of the great culture commentators from a Catholic perspective and also an expert on John Paul II.”

Weigel authored “Witness to Hope: The Biography of Pope John Paul II” in 1999 and earlier this year released “Evangelical Catholicism: Deep Reform in the 21st-Century Church.”

“Catholicism: The New Evangelization” is accompanied by a study program for adult faith formation, written by Brandon Vogt, author of “The Church and the New Media.” Vogt was recently named content director for Word on Fire ministries.