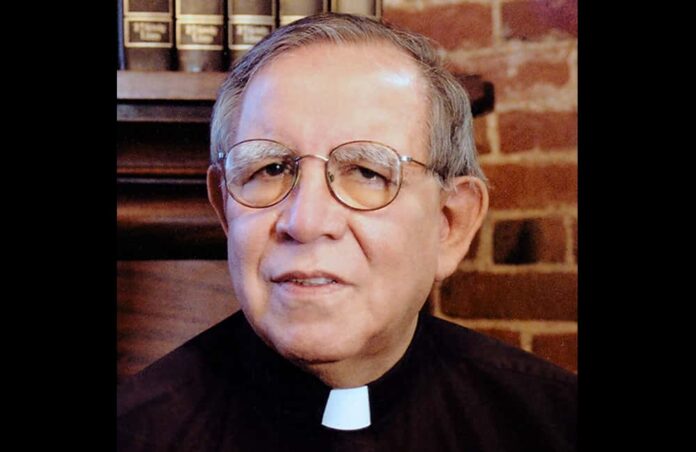 He preached unconditional love, to always forgive and to refrain from judging. Knowing that the truth sets one free and frees others to walk in truth, he was an open book about his own struggles.

He had a special love for the poor and suffering—plights he knew well from a difficult childhood. Once a furniture restorer, he was a faithful son, friend and foster grandfather. Above all, he was a dedicated priest.

“He was a man of God, but he was also a man of the people,” said Jennifer Ramos, 22, in a eulogy at the priest’s vigil and rosary held at Sacred Heart on April 11.

“Sacred Heart Church meant a lot to him,” she continued. “He attended this church along with his mother and was an altar boy. He grew up in this [Curtis Park] neighborhood. He was shaped by the poverty and injustices that he witnessed in this community.”

By the time Marcus Medrano dropped out of high school at age 15 to work as a laborer at a box company, his father had already been dead eight years, and two sisters had died, both at age 6. He earned a high school equivalency certificate, belonged to a religious community for a time and later worked in furniture restoration.

At age 44, he entered St. Thomas Seminary. After earning a bachelor’s degree and completing formation, he was ordained to the priesthood on Aug. 2, 1986. In his 20 years of active ministry, he only had two assignments: two years as parochial vicar at St. Joan of Arc Church in Arvada, followed by 18 years as pastor at Sacred Heart.

He was the first diocesan pastor of the now 140-year-old church—the oldest continuously operating Catholic church in Denver—which had been run by the Jesuit order since it’s inception. Located at the corner of 27th and Larimer streets, early parishioners had included Elizabeth “Baby Doe” Tabor, second wife of silver king Horace Tabor; the “unsinkable Molly Brown” of Titanic fame, and Servant of God Julia Greeley, an ex-slave known for her heroic charity to the poor. By the time he attended the parish grade school, however, the neighborhood had fallen on hard times. When he became the church’s pastor, although the area was gentrifying, the parish served a largely low-income Hispanic population.

Wanting to return the once grand but by then shabby church to its original beauty, Father Medrano rolled up his sleeves and with the help of two others put his restoration skills to use refurbishing the altar, pews and woodwork. He hired down-and-out artists to restore the original murals. Aided by a grant from the Colorado Historical Society and donations, he replaced the deteriorating steeple and had the church exterior sandblasted to expose the red brick hidden by dingy yellowish paint. In an interview with the Denver Catholic Register in the year 2000 when Sacred Heart was named a jubilee year pilgrimage site, Father Medrano likened the renovation to the spiritual conversion the Church calls people to.

“The Lord is stripping you down” he said, to reveal the beauty covered over “with the ugliness of sin or whatever happens to us in our lives.”

He was as adamant about feeding bodies as he was souls. His instructions to staffers regarding the parish’s food bank were that no one was to be turned away. When those asking financial assistance depleted the parish’s meager resources, Father Medrano gave from his own pocket.

“He was well-known for that,” said longtime friend Javier Ramos, who helped Father Medrano with the church renovations and whose daughter Jennifer and wife Myrna eulogized the family’s former pastor.

The Ramos family, which also includes a 7- and an 18-year-old, thinks of Father Medrano not only as their former pastor, but also as kin. When Father Medrano retired in 2006, both of his parents and all five of his siblings had already died, so he went to live with the Ramos.

“Father Medrano was a very humble man, unassuming. I don’t think I ever would have known about the woodworking he did at Sacred Heart had I not read about it in the paper,” said Msgr. Bernie Schmitz, former vicar for clergy and now pastor at St. Joseph Church in central Denver. “That’s in line with St. Francis at San Damiano Church, which he repaired, only later realizing God meant for him to rebuild not that one rundown church but the entire Church. That was Father Medrano—he used his skills to rebuild his church, to be a good steward.”

In retirement, Msgr. Schmitz said, Father Medrano was always willing to help out in the parishes and readily did so.

“Father Medrano exemplified his faith and vocation,” Myrna Ramos said in her eulogy. “He practiced what he preached.”

“I don’t like for people to hear ‘The priest isn’t here.’ I try to help them,” Father Medrano told the Denver Catholic Register in 2000. “I love being a priest.”

Funeral Mass was at the Cathedral Basilica of the Immaculate Conception April 13. Burial was at Mount Olivet Cemetery.