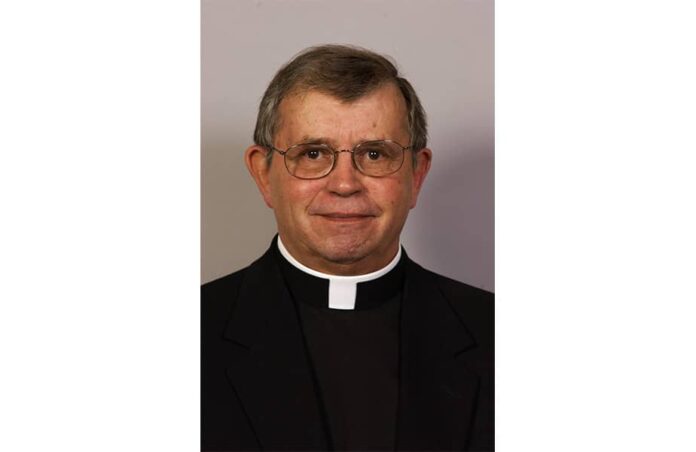 Father Joseph Blanco, a priest of 36 years for the Archdiocese of Denver, died peacefully May 13. He was 80 years old.

A Colorado native, Father Blanco lived his life demonstrating his generosity and humanity towards others, while serving the Lord. Father Blanco was born Jan. 22, 1940 and was raised in Glenwood Springs. Between 1958 and 1962, he served in the U.S. Air Force where he was honorably discharged. During his college years, he attended St. Thomas University in Houston, Texas, where he earned a B.A. in Liberal Arts and then entered the St. Thomas Seminary in Denver.

On June 2, 1984, Father Blanco was ordained a priest at the age of 44. The ceremony took place at the Cathedral Basilica of the Immaculate Conception in Denver and was celebrated by Archbishop James V. Casey.

“I mainly got to know Father Joe when we were in the seminary,” said Father Koehler. “He was studying for the Holy Ghost Fathers at the time and eventually changed to the diocese of Denver. We became good friends when he was assigned to my home parish in Sterling, St. Anthony’s. There, he grew to fall in love with the rural community and parishes. He served them so very well and they loved him for his dedication and care.”

During his priesthood, he served in multiple parishes mostly on the Eastern Plains of Colorado including St. Anthony Parish in Sterling, Holy Family Parish in Keenesburg, and Our Lady of Lourdes in Wiggins, among others, earning the affection and respect of not only the rural community, but also of his fellow priests.

“His gentle and quiet personality was a charm. He never sought after glory or recognition and was humble in receiving so many accolades from the parishes he served,” said Father Koehler. “He remained a pastor in the rural community from then on to the time of his retirement. They loved his little and subtle jokes and always gave him support when he was growing more and more ill. I will have him as one of my special friends and people always remembered him.”

“My walk with the Lord wouldn’t be where it is if it wasn’t for him,” Stephanie Todd, Father Blanco’s niece, told the Denver Catholic of her uncle. “He planted seeds early on just about paying it forward and things that I’ve tapped into adulthood and passed on to my children.”

In June 2010, he was granted retirement at the age of 70 and spent the next few years as a humble servant of God always reaching out to those in need. After a long struggle with an illness, Father Joe passed away this past May 13 in Wheat Ridge, leaving behind beautiful memories to not only his loved ones, but also to all the communities he served during his time on earth.

“He was a wonderful minister and he certainly was one who desired to bring Jesus Christ to others… The Church is thankful and blessed for his ministry.” said Archbishop Samuel J. Aquila at Father Blanco’s funeral Mass.

For Stephanie Todd, her uncle left her a special mission: “To pass on the goodness of the Lord,” she said. “And it’s not always by word, but it’s more by action than word. And he showed me that.”