His Church. Our Experience.
Subscribe
HomeLocalFather Herman Jayachandra remembered for his zeal and steadfast faithfulness
LocalObituaries

Father Herman Jayachandra remembered for his zeal and steadfast faithfulness 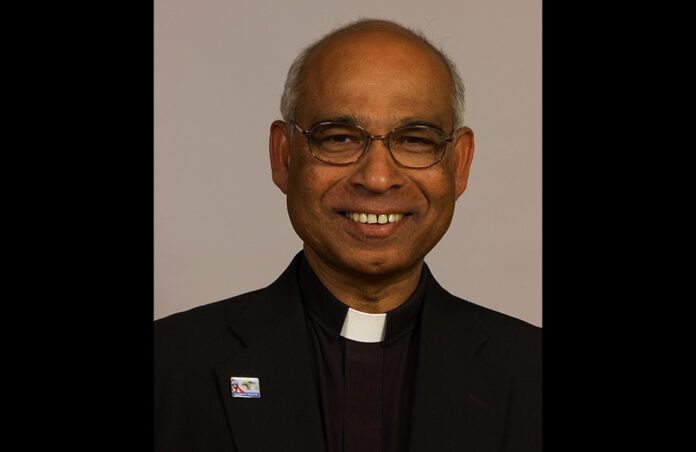 Father Hermanagild Jayachandra, a priest from the southern tip of India who served the Archdiocese of Denver for 25 years before retiring in 2012, died in his homeland May 2. He was 77 years old.

Affectionately called “Father Herman” by his parishioners, he was a seasoned priest in his 40s when he began ministering in the archdiocese in 1987. He had fled his homeland because his life was in danger from extremist groups who didn’t like his spreading Christ in the predominantly Hindu nation, where Christians — mostly Catholics — comprise just over two percent of the population.

Born April 13, 1944, in the coastal village of Kanyakumari (also called Cape Comorin) to Peter and Philomina Jayachandra, he was the eldest of five children. The Jayachandras, devout Catholics for generations — the Church in India traces its founding to St. Thomas the Apostle, who preached the Gospel in what is modern-day Kerala in 52 A.D. — counted several priests among their relatives. Following in their footsteps, he was ordained for the Diocese of Kottar on Dec. 20, 1968. He was 24.

“The day of my ordination was the happiest day of my life,” Father Jayachandra told the Denver Catholic Register in 1988.

He initially labored as assistant pastor and then pastor at several large parishes in his home diocese. In addition to evangelizing, he had a love for serving the poor and also ministered as an exorcist.

“I want to save souls and give myself in the service of others,” he told the Register, describing his priestly mission in India and in his then-newly-adopted land.

He tirelessly continued that mission throughout his priesthood.

In the Archdiocese of Denver, Father Jayachandra may be best known for his 15 years leading St. Martin de Porres Parish in Boulder, starting in 1997 as administrator and serving from 1998 to his retirement as pastor. During his time there, he built a perpetual adoration chapel.

He had previously served as assistant pastor or parochial vicar at the parishes of St. Joseph in Fort Collins, St. Thomas More in Centennial, and Good Shepherd in Denver. In 1992, Father Jayachandra became a U.S. citizen. In 2006, he added a Doctor of Sacred Theology degree to his bachelor’s degree in catechetics and pastoral theology.

“He was a really holy priest,” said Deacon Steve Stemper, president of The Catholic Foundation, who knew Father Jayachandra from his time at St. Thomas More. “He was very aware of the spiritual battles that we’re in with the evil one. He knew Satan was real.”

He was also a good friend who had a fun personality, the deacon added, one aspect of which was an affinity for spicy food.

“When we had dinner, the food we prepared was never as spicy as that of his Indian heritage,” Deacon Stemper said, chuckling, “so he would bring his own spices to liven it up.”

“He was a straight shooter,” Lidge said. “He was a spiritual resource for many people. He was a very good counselor and advisor.”

Father Jayachandra began a commitment to helping the poor in India early in his priestly ministry. While in the United States, he realized he could connect those here desiring to help with his compatriots in need. His India Projects Fund at St. Martin de Porres aided a host of worthy causes ranging from education, to food, housing, training, medical supplies via Project Cure, and related building projects. Especially meaningful to Lidge, who was a member of the India Projects Fund council, was a homeless shelter the fund helped build in south India.

“That was exciting,” Lidge said, adding that a plaque with donors’ names was sent to the facility where it was placed on a wall. “In 2015, after some time had passed, I was in that shelter and looked at the plaque. It was a brief but wonderful visit.

“A lot of people adored Father Herman because of who he was,” asserted Lidge, “his humility and his candor.”

“Father Herman became like family for us, for my husband and I,” said Monika Meile, a convert to Catholicism and Father Jayachandra’s longtime parish secretary. “We were devastated when he left [to return to India]. We stayed in touch every day.”

Among the many qualities Meile admired about her former pastor was his zeal to announce the Gospel door-to-door.

“Father Herman went evangelizing weekly,” she said. “A lot of times people would just slam the door in his face, but he brought a lot of people back to the faith — and to the faith. That was a big thing for him. It was just amazing. He was never discouraged.”

Due to medical problems, Father Jayachandra retired from priestly ministry for the archdiocese at age 68 and relocated to Tiruchirappalli, India, where he lived with a widowed brother-in-law the last nine years of his life.

“He passed away quietly at home,” his nephew Leo Leslin told the Denver Catholic via phone from his home in Bahrain, India. “He was bold, and he dedicated his life to the salvation of people and the kingdom of God. He was completely faithful to God.”

“He loved the Church, he loved Jesus Christ and he loved his priesthood,” declared Deacon Stemper.

“I’m sure he’s continuing to do good work on the other side.”