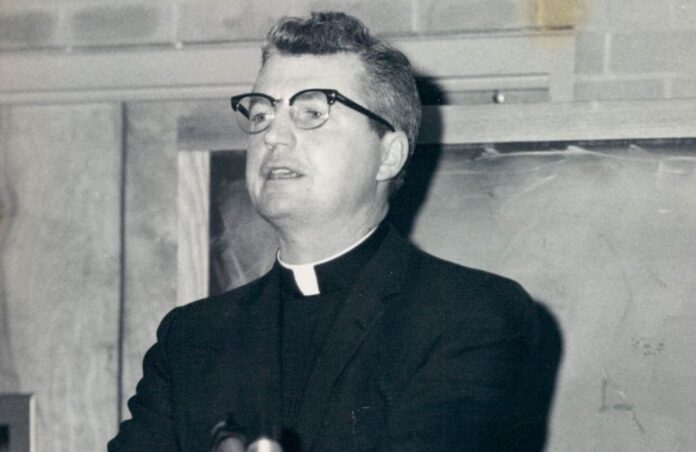 He was born in Denver on July 8,1926, to Jennie (Dougherty) and Daniel Flaherty. While growing up in Denver he attended St. Catherine of Siena School and Regis High School, graduating in 1944.

He attended Colorado School of Mines in Golden one year and Georgetown University in Washington, D.C., one year. He also served one and a half years in the U.S. Army Air Forces. He then entered St. Thomas Seminary and was ordained to the priesthood in 1954.

Shortly after ordination, he was assigned to the Denver Catholic Register, where he worked under Msgr. Matthew Smith, who founded the Register System of Newspapers and launched the National Catholic Register. For the DCR’s 100th anniversary in 2000, Father Flaherty wrote a column about his experiences with the newspaper during its heyday.

“We published 30-35 newspapers every week for archdioceses and dioceses around the country that would not have had such a service without the Register’s help,” he recalled. “Total circulation in those days was around 850,000 copies, all edited and printed at a self-contained plant employing 150 people.”

Under Msgr. Smith, Father Flaherty launched the DCR’s military edition. From 1966-1972, he served as editor and business manager of the DCR. He left the newspaper shortly after the Register System’s presses and network were sold.

“I’m convinced the Denver Catholic Register was responsible for beginning diocesan newspapers throughout the country, which became tremendous teaching and communication tools,” he wrote. “In addition, I’m certain that the National Register helped bridge the gap during and immediately following the Second Vatican Council between advocates of the ‘changeless Church’ and the new adherents to the ‘changing Church.’ At least a dialogue began.”

While at the Register, Father Flaherty served in residence at St. Anthony of Padua and Holy Family parishes in Denver. In other parish ministry, he served as assistant pastor at St. Vincent de Paul in Denver and at Holy Trinity in Colorado Springs. He was administrator pro-tem at St. Catherine in Iliff and at Sacred Heart in Peetz.

He was pastor at Our Lady of the Mountains in Estes Park from 1978-1987. In 1982 he founded Spirit of Peace in Longmont and was also pastor of its mission in Lyons. Spirit of Peace was a nontraditional parish without a resident pastor for 22 years. It also shared facilities with a Presbyterian church for 25 years, until moving to another location and getting a new name, St. Francis of Assisi, in 2007.

“He was highly affected by Vatican II and what it meant,” Father Tom McCormick said of his longtime friend and brother priest. “He was a pastor who knew he didn’t have all the answers and he pitied those pastors who thought they did.

“He was a people person and very involved in forming lay people as leaders in the Church,” Father McCormick added, noting that Father Flaherty was informed on social issues and liked to discuss them.

About Father Flaherty’s time with the Denver Catholic Register, Father McCormick said, “He had an appreciation for the written word, he loved theology and he liked to share what was going on with the life of the Church.”

Father Flaherty retired in 1997 and spent most of his retirement years in residence at St. Louis Parish in Louisville.

“I’m glad he got to go home (to be with God),” Father McCormick said. “It was painful to see him go, but I’m glad he was able to go home where he belongs.”

Father Flaherty was preceded in death by his parents and his two sisters, Lucille Crumbaker and Sister of Charity of Cincinnati Helen Flaherty.

A vigil service was held Jan. 4 at St. Louis Church in Louisville. A funeral Mass was celebrated Jan. 5 at the Cathedral Basilica of the Immaculate Conception in Denver.