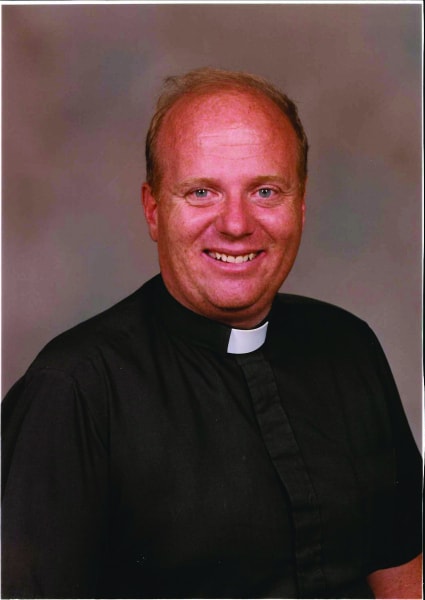 Father Lawrence W. “Bill” Carmody, the second priest to be ordained for the Diocese of Colorado Springs and one of its most beloved pastors, died Feb. 23 at age 58.

A funeral Mass will take place March 5 at 10 a.m. at St. Dominic Parish, followed by burial in the priests’ lot at Evergreen Cemetery. A reception will be held at St. Dominic after the burial.

Father Carmody was well-known around Colorado because of his tireless efforts as long-time director of the diocesan Respect Life Office, and as news of his death spread, tributes began pouring in from around the state and even other parts of the country.

“For more than 25 years, he was a warrior for the unborn,” said Bishop Michael Sheridan. “He is known nationally for his work. That is his legacy.”

“He’s really been the clarion call and the moral voice on this issue for so many years,” said Rep. Terri Carver, R-Colorado Springs. “He will be greatly missed. He was a great man.”

Father Carmody was born Sept. 26, 1957 to Lawrence W. and Delia Carmody of Denver. He was the second-oldest of seven children, growing up with two sisters and three brothers (one sister died in childhood).

As a boy, he loved basketball, football and baseball but lacked the athletic ability to be a starting player, said his younger brother Patrick.

“Bill’s athletic career can be summed up in three words: short, slow and asthmatic,” Patrick Carmody told the Herald. “That did not stop him from loving sport and putting his whole heart into whatever game we were playing. In junior high, he was cut from the basketball team every year. He was also cut from the basketball team for three consecutive years at Bear Creek High School. However, he was the manager of the 1974 high-school team that won the state championship. He went on to be the basketball manager at Indiana State University, including three years that Larry Bird was on the team.”

After graduating from Indiana State University in 1981 with a master’s degree in athletic training, Father Carmody worked for three years as a high-school athletic trainer in Mission, Texas. During that time he became engaged to a music teacher at the high school, but he broke off the engagement when he realized he was being called to the priesthood.

He studied at Holy Trinity Seminary at the University of Dallas for two years, then finished his seminary education at St. Thomas Seminary in Denver. He was ordained a priest on June 2, 1990 by Bishop Emeritus Richard Hanifen at Ave Maria Church in Parker, where he had served as a transitional deacon.
It was during his first assignment at Ave Maria Parish that he became aware of the need for a ministry to women and men suffering from the effects of abortion, he told The Colorado Catholic Herald in an interview on the occasion of his 25th anniversary as a priest.

“During a political campaign, one of the candidates ran a television ad that showed pictures of aborted babies,” he said. “Because of that, a woman came forward who struggled with a past abortion, and I didn’t know how to help her. Mimi Eckstein had started Project Rachel in Denver. I said, ‘Boy, we need to near something for down here.’”

After he was assigned to Corpus Christi Parish in 1994, Father Carmody introduced the Project Rachel program in the diocese.

“That’s the most profound experience I have as a priest – watching people heal from they believe is an unforgivable sin and find God’s forgiveness,” he said.

“If you truly want to know the healing power of Father Bill’s heart, ask a man or woman who has completed Project Rachel,” said Rhonda Miller. “Fifteen years ago, Father Bill heard my confession of abortion and led me through Project Rachel to the healing arms of Jesus. My life was changed in the most positive way possible.”

“He was gifted in the way he worked with post-abortive men and women, leading them to healing,” said Sarah Bidon, a counselor with Catholic Charities of Central Colorado. “He leaned on the Holy Spirit as he did this work and the glory always went to God. He was a mentor to me and I leaned on him as he taught me to grow in this ministry.”

“Father Bill was a kind and quiet presence to all those that he ministered to, but above all he exuded an accepting and forgiving love. In this Jubilee Year of Mercy, it is fitting to recognized Father Bill as one who loved both baby and mother and wanted healing for every post-abortive woman and man,” said Kathy Thayer, vice president of Catholic Charities’ Life Connections agency.

In 1995, he was named pastor of Corpus Christi after the retirement of Father Jerry Bruggeman. He was a favorite of school children at the parish due to his playfulness and love of sports.

“His child-like presence among the young students at Corpus Christi School and parish as he ate with them, played at recess with them, and taught them allowed students to see the priesthood as a fulfilling life,” said Patty O’Connell, whose three sons graduated from the school. “He had conviction, yet was lighthearted and fun. Young men considered a vocation to the priesthood because of him.”

It was also in 1994 that Father Carmody also began celebrating weekly Masses in front of the Planned Parenthood Clinic in Colorado Springs, first at the previous location on Colorado Boulevard, and then at the current location on Centennial Boulevard. In 2008, he helped to start the 40 Days for Life prayer vigil to end abortion in Colorado Springs. Those involved in the pro-life movement locally said that Father Carmody helped them to keep going even when it seemed like their efforts were futile.

“When 40 Days for Life began, as the leader I ‘knew’ there would be hundreds of people out there for the kick-off,” said Michele Mason, local coordinator of 40 Days for Life. “Of course when the kick-off arrived, there were about 20 people. After the event, when he saw I was disappointed in the low turn-out, he lifted my spirit back up and we continued on. He always said the fight to end abortion is not a sprint, it’s a marathon.”

Father Carmody became parochial administrator of Holy Family Parish in Security in 2000, and was named pastor of that parish as well as St. Joseph Parish in Fountain in 2002. He remained heavily involved with children and teens at both parishes by attending sporting events at the local public schools.

In August 2015, Father Carmody was presented with a “Community Legend” award by Widefield School District 3 for his longtime support of district athletic programs.

“For the past 15 years, Father Bill has attended around 1,600 extra-curricular school events in Widefield School District 3 and Fountain-Fort Carson District 8,” reported a local newspaper.

“It means a lot to the kids to have someone there watching them play and supporting them; even if the team loses, I can compliment them on at least one thing they did well in the game,” Father Bill was quoted as saying. “I want kids and their families to know that I am around and they have somewhere to turn if they need me.”

When Holy Family and St. Joseph Parishes were merged to form St. Dominic Parish in 2008, Father Carmody oversaw the construction of the new church building, which was dedicated in March 2010.

Throughout that time, he remained active in the pro-life movement and was instrumental in helping Project Rachel expand in the diocese. He also remained active in ministering to teens, including organizing a yearly chastity rally and leading trips to the March for Life in Washington, D.C., and World Youth Days. One of his iconic strategies for handling large groups of teens was to hold a yellow ball—nicknamed “Wilson”—above his head so that anyone who got separated from the group could find him.

“When I go to the March for Life, I get inspired by all the young people who are so pro-life; I get energized by it,” he told the Herald in 2015. “We just have the love of God in us. The other side has no joy. They’re just dead inside—you can see it.”

“As a rule, he was quiet and unassuming,” said Lynn Grandon, program director of Respect Life Resources of Catholic Charities in the Archdiocese of Denver. “But bring up the subject of protecting early human life in the womb and watch the warrior emerge! I can’t help but picture him now in heaven, with clusters of little children around him, hugging his legs and thanking him for praying for them, and caring for them when no one else did.”

Father Carmody frequently traveled to Denver to attend hearings for legislation related to the sanctity of life and developed friendships with leaders from other faiths. In early February, he was present for the hearing in the Colorado Senate regarding a bill to legalize physician-assisted suicide.

“We sat together all day and we talked a lot,” said Rabbi Oswald Garagorry of the Aliyah Congregation in Monument. “I got to know him more and we had become friends.”

Even as he battled lung cancer in recent years, Father Carmody continued to say Mass in front of Planned Parenthood each week and kept up his pro-life work.

“After he was diagnosed with cancer, I accompanied him to doctor appointments and chemotherapy infusions,” Miller said. “Through it all, when the nurses and doctors asked him how he was doing, he would reply, ‘Living the dream!’ Father Bill wanted to live, but he also gracefully accepted this part of his journey. Now he is safely with Jesus and is truly ‘living the dream.’”

“I know the focus is on his pro-Life work, but my fondest thoughts are of the legacy he left at Corpus [Christi Parish],” said Ryan O’Connell. “He truly was a great man, and he probably wants us to be celebrating his journey to heaven!”

Or, as Father Carmody himself put it, “I’ve never stopped being a kid.”

This article was published with permission of the Colorado Catholic Herald