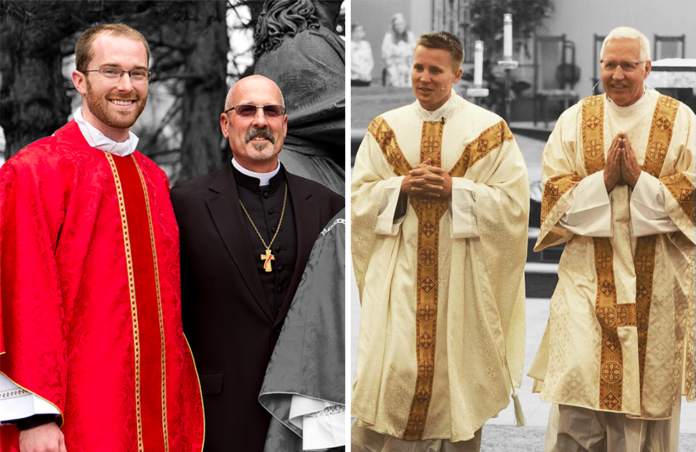 The bond between a father and son is one of God’s greatest designs; however, when father and son are both called to serve the Church as deacon and priest, that bond takes on a whole new meaning. Just ask these two dads and their sons, all of whom answered the call to serve the people of God at the altar.

Deacon Michael Magee serves at Our Lady of Loreto Parish in Foxfield, while his son Father Matthew Magee has worked as the priest secretary to Archbishop Samuel J. Aquila for the past several years and will soon be moved to a new assignment as parochial vicar at St. Thomas Aquinas Parish in Boulder. Deacon Darrell Nepil serves at Our Lady of Lourdes Parish in Denver, and his son, Father John Nepil, served at several parishes within the archdiocese before his current assignment as a professor at St. John Vianney Theological Seminary.

However different their journeys may have been, all four have something in common; mainly, that far from seeing their vocations as a reward from God, they have received them as an uncommon gift of grace that has blessed their families and individual relationships with each other abundantly, knowing that God acts in different ways to help us all get to Heaven.

Deacon Michael Magee was ordained in May 2009, at the end of Father Matt’s first year of seminary. Little did they know that God would use both of their callings to encourage each other along the journey.

Deacon Michael’s journey began when a man from his parish was ordained a deacon.

“I simply felt like God was calling me to do something more than I was doing at the present time,” he said. “I had been volunteering for a number of different things and was involved in some ministry activities and in the Knights of Columbus. And I thought the idea of being a deacon would be simply another activity for which I could volunteer.”

He didn’t know what it entailed at the time. In fact, he believed it was something a man could simply sign up for. To his surprise, the diaconate was more serious – and it required five years of formation and discernment. Yet he was so drawn to it, that he decided to do it anyway. But as he learned more about the nature of the diaconate during his formation, he became more nervous and unsure about whether God was really calling him to that vocation.

While his doubts remained all the way up to his ordination, Deacon Michael was faithful to his studies, trusting that God would lead him in the right path.

And God did — through the calling of his own son to the priesthood.

Deacon Michael didn’t realize that his son Matthew had paid close attention to his father’s faith journey and had found in it a light that gave him courage to discern the priesthood.

“Seeing my dad, as a father, growing in his relationship with the Lord was really influential for me on my own desire to follow Christ,” said Father Matt. “Looking at his courage to discern his own vocation and follow God’s plan in his life gave me the strength and courage to be open to the same thing in my life… He played a very important role, whether he knew it or not at the time, and whether I knew it or not at the time.”

On the other hand, Father Matt didn’t know that his dad was in turn encouraged by his own response to God’s calling.

“As I went through all those doubts, I watched Matthew’s journey in seminary and listened to how he was dealing with that in his life. And, as he just articulated very well, I also saw those same qualities in him,” Deacon Michael said. “Seeing a young man in his 20s willing to consider following God for the rest of his life also gave me the courage to continue on in my own journey, to see it through.”

God’s way of uplifting them in their vocations through each other’s journey is something they are very grateful for.

This unusual grace impacted Father Matt during his first Mass, when his dad, as deacon, approached him before the Gospel reading and asked for the traditional blessing by calling him “father.”

“It was a really special moment for me. He’s certainly my biological father and raised me. But then there’s something different when we’re at the altar in a clerical capacity — there’s a strange reversal of roles when we’re giving spiritual nourishment to the people — a father asks the new father for the blessing,” he said.

In both of their vocations, Deacon Michael and Father Matt see God’s Providence and the unique plan he has for all of us.

“We all have a vocation, even if it’s something we may not expect,” Deacon Michael concluded. “You may feel anxiety or worry about what it’s going to look like, but trust in God. He will take care of things as he always does.”

A bribe for Heaven

For Deacon Darell and Father John Nepil, the journey was different, but not any less providential.

While he grew up Catholic, Father John wasn’t interested in setting foot on any Church activity during his teenage years. His saving grace was perhaps what many parents have to do to get their teenagers to Church: bribe them.

“His mom and I basically bribed him to go to the Steubenville of the Rockies Conference,” Deacon Darell said with a laugh. “He didn’t want to go, but we’d heard so many good things about it, that we said, ‘We’re going to make this happen, whatever it takes.’”

So the Nepils came up with a creative idea.

“He owed me some money for a uniform that he had needed for a job in the summer. So, I said, ‘Listen, if you go to the Steubenville of the Rockies Conference, I’ll forgive your debt. And he did, he and his brother went. And John especially came back a different boy. He literally was converted with a lightning bolt at that retreat.”

To this day, Father John marks his conversion to Christ from the summer before his senior year in high school when he attended that conference.

As it happens with stories worth telling, the details of how much money he owed his father have varied over the years, and it’s a matter of debate among them, but Father John remembers it was close to $500.

“That’s subject to each one,” Father John said laughingly. “But what matters is that they offered to forgive my debt if I went to this retreat – it was money well spent.”

Besides this important event, Father John said that his dad influenced him in many ways by the simple fact of who he was as a father.

“My dad’s faith and moral character were a rock for me during some difficult teenage years,” he said. “He’s a great example of a man who was always faithful and lived a really outstanding moral life, but then as he deepened in love with Christ, he decided to give of himself in a more profound service.”

Besides his desire to serve and follow God, the seed that would eventually lead Deacon Darell to the diaconate was planted by a coworker, who would also take holy orders: Deacon Joe Donohoe.

“One day he said to me, ‘You should be a deacon.’ And, of course, I laughed at him and said, ‘I don’t have time for that. My life is too busy.’ But it only took him to suggest it for the idea to keep coming back to my head, and God kept nudging me. Eventually I decided I really wanted to do that,” Deacon Darell said.

The ability to share at the altar during the Mass has deepened the natural relationship of father and son and given Deacon Darell and Father John new opportunities to grow closer to God.

One of the most meaningful times came when Deacon Darell had a massive stroke in 2018. While he was in the hospital, Father John was able to visit and celebrate Mass at his bed and pray the rosary with him every day, as he had come back from Rome and was working on his dissertation.

“It was probably the most privileged and intimate time I’ve ever had with my father,” Father John said. “It was an amazing gift that really changed our relationship.”

“I feel like that’s a huge reason why I healed and why I am here today,” Deacon Darell added.

“It’s a real gift to have my dad as a deacon and a brother. It’s a tremendous honor. It’s one of the great joys of my life.” Father John concluded. “That’s really what has bonded our relationship together: the sheer desire to serve Jesus, especially in holy orders.”