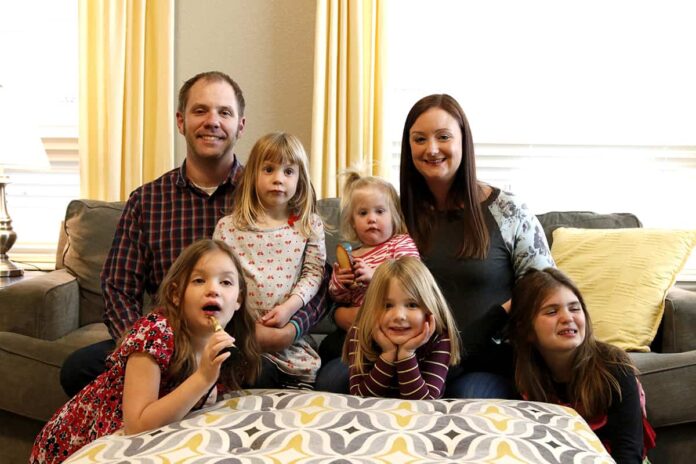 Cecilia Fries had just received her first reconciliation, First Communion and confirmation when she told her mom something deeply profound.

“When [the priest] put the oil on my head, I got really hot,” said Cecilia. “And when I drank Jesus’ blood, it washed me all on the inside.

Her statement would seem transcendent even for a spiritual adult.

But Cecilia is only 9 years old, and she has CLN3 Batten disease, an inherited disorder that affects the nervous system.

“This is coming from a kid who has speech and language difficulties and can’t communicate accurately that she can’t find her shoes half the time,” said Cecilia’s mom, Beth.

“For her to spiritually connect those pieces — sacraments getting you closer to heaven.”

It leaves Beth and her husband, Jon, simply amazed.

Life was normal for the Fries family until Cecilia began losing her vision in 2014.

Over the next three years, she underwent visits with an eye doctor and a specialist, and eventually received genetic testing, which came back negative. During this time, Cecilia’s younger sister Lilly also began losing her vision.

Around Thanksgiving 2017, Beth took Cecilia for additional blood tests. More than a month later, Beth heard from the doctor, who finally had a diagnosis, but was hesitant to tell her.

“Ok, good, we have something to go on,” Beth thought.

She called Jon on her way home to let him know the diagnosis. Already at a computer, he was able to look it up immediately.

“I just remember the buzzing and tingling in my ears getting really hot, and being like, ‘No. That’s not happening. This isn’t the whole story.’”

When Beth made it home and discovered the same results, she “collapsed on the laundry room floor.”

As the couple continued reading and saw words like “cognitive decline,” “mobility loss,” and “feeding tube,” they were horrified.

And then the worst came — “life expectancy: late teens to early 20s.”

CLN3 Batten disease, which both Cecilia and Lilly have, is extremely rare, and there is no cure.

“When you read that’s what’s going to happen to your child,” said Beth, “all the hopes and dreams [shatter].”

But it wasn’t until 2015 when Jon joined the Catholic Church.

“That was right before everything started to fall apart and change,” said Beth. “Looking back, we can see how much stronger our marriage is now because we both have Christ at the center of our marriage.”

Throughout the time since the diagnosis, the Fries family has experienced community support and several miracles that have kept them going.

“There’s been tremendous blessings that have come from this somehow,” said Beth.

Faith has been a central part of Cecilia and Lilly’s journey.

When Lilly, who is normally very quiet during car rides, recently told her mom about a dream she had, that became even clearer.

“I went to heaven,” Lilly told her mom.

“It smelled like the oil that they put on my head at confirmation,” Lilly replied.

“She told me that St. Therese [of Lisieux] was there — she’s her favorite,” Beth said with a smile.

The couple explained that their daughters don’t know the disease is fatal.

“But yet they say things like, ‘We’re going to go to heaven to be with Jesus someday,’” said Beth.

“It seems to sound like they’re at peace with their station in life,” said Jon.

‘We believe in miracles’

It’s easy for Beth and Jon to feel anger toward God in the midst of their suffering.

“But eventually, it comes down to learning to trust again in God and building that relationship and accepting being angry,” said Jon.

After moments of hopelessness, the couple often experiences “some crazy supernatural coincidence,” said Jon. “Well, when you have as many coincidences as we’ve had, they’re no longer coincidences.”

“We don’t believe in coincidences,” Beth added. “We believe in miracles.”

A primary example happened shortly after the diagnosis when the couple realized their house was too dangerous for their oldest daughters.

Beth drew a floor plan that modeled a ranch with four bedrooms — something she believed didn’t exist. But after searching for homes online, one caught her attention.

“I clicked on it, and the floor plan popped up huge,” said Beth. “The floor plans don’t ever pop up huge. You usually have to click and click [to see then].”

Beth was stunned by what she saw.

“It was almost identical to the floor plan I had drawn four days earlier,” she said.

Beth and Jon walked through the house that night.

“I literally just drew this,” Beth thought, “and we are walking through this right now.”

I know I couldn’t do it without God. I know I could not do this without our Catholic faith, without the sacraments, without being able to receive Jesus on a weekly basis.”

The house had been on the market for three months. It was a ranch because the neighbors didn’t want it to obstruct their view. The basement was unfinished, leaving room for Beth’s parents to move in and help with the financial cost.

Experiences like that are what keep the family going.

“It’s still God there constantly trying to reassure us,” said Jon, “and doing it in little ways.”

In moments of comfort or relief, Jon hears God saying, “I’m going to give you this little piece because if I give you too much, you can’t handle it. We’re going to do it a little bit at a time.”

‘God has our back’

The Fries family has already become involved in spreading the word about Batten disease.

They organized the Expect Miracles Rare Sisters 5k on April 28 to raise money for the Beyond Batten Disease Foundation based in Austin, Texas. Expecting a turnout of 300-500, Beth and Jon were astounded when more than 1,000 people showed up.

The couple wants to do whatever they can to help not only their daughters, but children who will be diagnosed with Batten disease in the future.

“Unfortunately, the amount of research that still needs to be done and our girls’ life expectancies are not going to match up,” said Beth. “But, whatever we can do to help for the babies that will be born 10 years from now, [we will].”

For now, the family lives in the present and continues to rely on God and their Catholic community to keep them going.

“I know I couldn’t do it without God,” said Beth. “I know I could not do this without our Catholic faith, without the sacraments, without being able to receive Jesus on a weekly basis.”

Beth and Jon agree that although suffering is considered a negative in secular society, they have grown to see something greater.

“Suffering is a beautiful word,” said Beth. “There’s so many graces and so many blessings that come from suffering.“Here’s this horrible life-changing, life-ending diagnosis, and yet God has our back,” she said.

“He’s provided for us through this whole thing, and we just have to continue to trust that he will.”

For more information on the Fries family, visit raresisters.org.