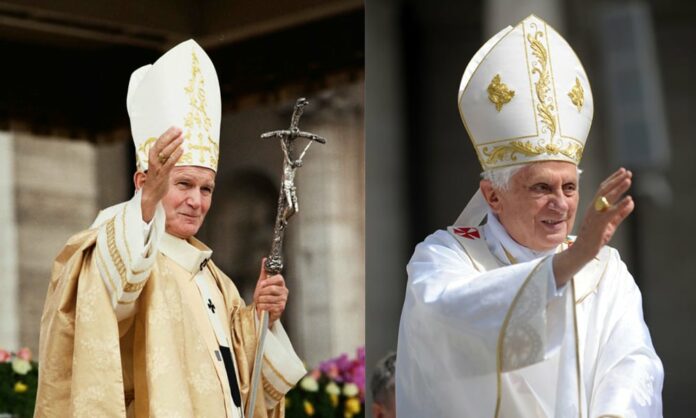 I thought of Moynihan’s Rule when reading British writer Paul Vallely’s December 17 op-ed article in the Guardian. There, the author of an important biography of Pope Francis argued that the Pope is “steadily filling the College of Cardinals with moderate pastors rather than doctrinal ideologues.” This is, of course, a standard journalistic trope. It’s also fake history.

Now I don’t wish to be harsh, but anyone who imagines that any of those men is a “doctrinal ideologue” has forfeited his claim to be a credible Vaticanista. And every single one of them was named a cardinal by John Paul II or Benedict XVI. Every. Single. One.

Moreover, Cardinals Danneels, Kasper, Lehmann, and Murphy-O’Connor were among the chief promoters of Cardinal Jorge Mario Bergoglio in the conclave of 2013. After that conclave elected Bergoglio as Pope Francis, the new pontiff immediately named Cardinals Rodríguez Maradiaga, Gracias, and Marx to his Council of Cardinals, a papal kitchen-cabinet for curial reform. Cardinals Braz de Aviz, Calcagno, Coccopalmerio, Hummes, Koch, and Schönborn have played significant roles in the pontificate to date, and Cardinal Tagle is on every Great Mentioner’s list of papabile for the future.

And to repeat, appassionato e fortissimo: each of these men was created cardinal by John Paul II or Benedict XVI.

Dividing history into two sharply contrasting periods occasionally makes sense. The United States before and after the Civil War comes to mind: prior to that great cataclysm, people said “the United States are….”; afterwards, the usage became “the United States is.” Japan before and after World War II is another instance where straightforward bifurcation doesn’t involve simplistic periodizing. But such examples are rare. Poland today is living through a period of domestic political contention that seems remarkably similar to that country’s debates about its identity in the 1920s and 1930s. France is to some extent still fighting internal battles that began in 1789. History is far more organic and developmental, and much less linear, than the artificial division of the human story into binary, opposed periods suggests.

That’s particularly true of the Church. We’ve become far too accustomed to thinking of the Second Vatican Council as a kind of ecclesiastical Grand Canyon separating two utterly different periods of Church history. Yet the second-most cited source in the footnotes of the documents of Vatican II, after the Bible, is the magisterium of Pope Pius XII, whose reforming encyclicals in the mid-1940s accelerated the dynamics that shaped the Council between 1962 and 1965. Indeed, Vatican II is inconceivable without Popes Leo XIII (1878-1903), Pius X (1903-1914), Benedict XV (1914-1922), Pius XI (1922-1939), and Pius XII (1939-1958).

Furthermore, the suggestion that the pontificates of John Paul II and Benedict XVI were intellectually sterile is simply ridiculous. These were the years of the Theology of the Body, the great encyclicals Redemptor Hominis, Dives in Misericordia, Veritatis Splendor, Redemptoris Missio, and Centesimus Annus, and the remarkable “September Addresses” of Benedict XVI in Regensburg, New York, London, and Berlin. Between 1978 and 2013, a rich body of papal teaching – intellectually bold and evangelically fertile – was given to the Church.

It does Pope Francis no good service to demean his two predecessors as rigid ideologues. It’s also fake history.