His Church. Our Experience.
Subscribe
HomeLocalFrom no faith to a mountain-top of meaning
Local

From no faith to a mountain-top of meaning 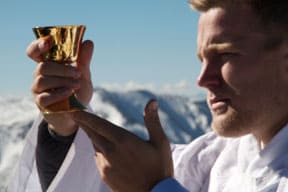 This story is the first in a Year of Faith series sharing testimonies of Catholics from all walks of life. See the powerful related video of Father John Nepil’s witness at OneBillionStories.com.

A fast-paced suburban life focused on success had left 17-year-old John Nepil burned out and without faith when an encounter with Christ changed his life.

It was July 14, 2001. The Littleton High School junior’s parents had bribed him to attend a Steubenville of the Rockies youth retreat. He despised it.

Since his freshman year he had increasingly turned to alcohol, drugs and sex to escape his overactive life, which was aimed at building a stand-out college application and included the pressures of playing multiple sports and instruments and striving to earn top grades. He had gotten into trouble and ended up at the retreat.

“I owed my parents $500 and $500 is what they paid for me to go on the retreat,” he told the Denver Catholic Register. “I hated being on the retreat—every second of it—with all those Jesus freaks.”

Then something miraculous happened.

“I was actually walking away from the conference and he came out after me. I didn’t know him, I’d never seen him,” he told OneBillionStories.com, recalling the priest who played a pivotal role in his conversion. “After about a three-hour conversation, he heard my confession.”

The priest, he marveled, “left the 99 (sheep) and went after the one.”

“(He) broke into my life and spoke the truth,” he told the Register. “I experienced the forgiveness of God and the beauty of it in confession. I saw the beauty and the goodness of (God’s) presence in eucharistic adoration.

“That day, everything changed.”

The suffering teen had experienced God’s love, mercy and forgiveness through the Church. No longer was Jesus Christ just a historical religious figure—and no longer was the Church simply an entity that dispensed “intellectual doctrine and moral obligation” to oppress people, but the instrument through which he had encountered the living Christ.

He had a revelation: “Jesus Christ was the answer to the question of my existence.”

“The most beautiful thing,” he told the Register, “is to find meaning in suffering and to find purpose in the things of my life that seem hopeless. The Cross is the glory for the Christian and death truly has been conquered.”

In the months following the retreat he realized that he wanted to give his life to Christ and serve him—so after graduation he entered the seminary. He was ordained to the priesthood in May 2011 and now serves as parochial vicar at St. Thomas Aquinas Catholic Center in Boulder, where he leads a group of university students in pursuing the Catholic faith and outdoor adventures in the mountains.

“To this day (that youth retreat priest) doesn’t know that that was the definitive moment of my life, July 14, 2001. He doesn’t know that a year later I entered seminary and am now a Catholic priest,” Father Nepil told OneBillionStories.com, which filmed him celebrating Mass Sept. 29 at the top of Quandary Peak, a 14-er near Breckenridge.

The compelling video, which includes stunning views from the summit of the 14,265-foot mountain, was launched Oct. 11, opening day of the Year of Faith called by Pope Benedict XVI.

“With our Holy Father announcing a Year of Faith from Oct. 11, 2012, to Nov. 24, 2013, our video missionary team saw the need to share a story that exemplifies the development from a non-existent faith to a profound encounter with Catholicism,” explained Seth DeMoor, founder and president of OneBillionStories.com. “Father John Nepil’s 3-minute video certainly captures his ascent from no faith to a mountain-top-faith, filled with purpose and meaning.”

Today, the 29-year-old Father Nepil likens the adventure he seeks in the mountains to the deeper spiritual adventure God is always calling one to.

“Now, I exist for one purpose,” he told the Register, “for the Gospel message of Jesus Christ and seeking ever more to conform my life to it.