Faith and politics in the United States 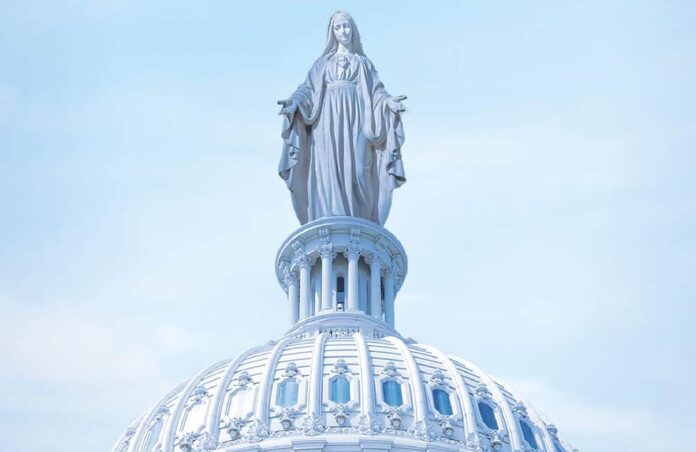 Cherished principles of the American revolution include religious freedom and the separation of Church and State. These principles should have benefited Catholics, who sought refuge from the persecution of the formally established Church of England. Catholics, however, could only vote in Pennsylvania and Maryland after the founding of the United States. Despite the original purpose of these principles, they have now falsely come to mean popularly that religion should have no role in public life. Not only did the Founding Fathers not intend this, but the Church also calls us to active engagement in political life by living out our faith in society. A number of books published in the last few years shed light on this call.

This volume collects a number of distinct writings on the topic of politics from the life of the retired Holy Father. It addresses some of the most foundational elements of society: the relation of personal freedom to truth, how human dignity undergirds law and justice, and how faith gives reason a more expansive view of the goal of human life. Ratzinger explores the relation of faith and politics in the early Church for insights into the problematic secularism that now dominates our political life. In the end, he proposes that society depends upon an ordered freedom that directs government toward the fulfillment of shared goods. We need a genuine freedom that contains “the ability of the conscience to perceive the fundamental values of mankind that concern everyone” (101).

Supreme Court justice Antonin Scalia represented a strong Catholic voice in the public square, though not without controversy. This volume offers a collection of his speeches, dealing not only with law, but also with education, the arts, virtue, and friendship. In his talks touching on faith, he contrasts Jefferson’s supposed sophisticated rejection of miracles with the wisdom of St. Thomas More; encourages us to live a distinct and even weird life in the eyes of the world; exhorts Catholic universities to fidelity; navigates the thorny issue of separation of Church and State; speaks on the importance of going on retreat, and the necessity and limits of faith in public life. He advises: You must . . . not run your spiritual life and worldly life as though they are two separate operations” (147). A Catholic justice, he clarifies, fulfills his office not by seeking to legislate opinion or belief from the bench, but by interpreting the Constitution and the law with integrity and precision. These speeches capture his living voice, in a compelling and accessible manner, which can continue to inspire Catholics to enter public service.

Daniel J. Mahoney, The Idol of Our Age: How the Religion of Humanity Subverts Christianity (Encounter Books, 2018)

Mahoney, a professor at Assumption College, examines the trajectory of politics since the French Revolution and proposes that a humanitarian religion has supplanted the Christian faith and undermined the integrity of local, participatory politics. Favoring an abstract globalism that promotes individual rights and autonomy, “we increasingly despise meditation and the political expression of our humanity. In truth, human beings experience common humanity only in the meeting of diverse human and spiritual affirmations and propositions that arise from the concrete human communities in which we live” (8). This abstraction has also entered the Church, as Christians “increasingly redefine the contents of the faith in broadly humanitarian terms. Christianity is shorn of any recognizable transcendental dimension and becomes an instrument for promoting egalitarian social justice” (13). Mahoney draws upon key thinkers who have pointed to the dangers of humanitarianism — Brownson, Soloviev, Solzhenitsyn, Ratzinger — and the book is worth reading simply as an introduction to their thought. He concludes that in embracing the Church’s rich tradition of faith and reason, we can also return to a genuinely human political life, through “the humanizing discernment made possible by conscience” (124).

Gordon’s thesis seems to follow Mahoney’s in that Catholic Republic argues that the Catholic faith is necessary for the future of the American republic. Insofar as the flourishing of any republic depends upon an acknowledgement of the truth and virtue for its realization, Gordon’s thesis is correct: The Church can and should help our society to reach its true good. The details of Gordon’s assertion of a crypto-Catholicism underlying the Constitution and American life, however, overplays its hand. He contends that a so-called Catholic Natural Law, the Church’s development of the law of reason accessible to all people, uniquely supplied the vision for American government. In this, I find that Gordon overlooks the unique (and problematic) contributions of the Enlightenment to the American founding, as well as how the Catholic tradition teaches natural law and good politics as natural realities, not something that the Church owns and transmits in an exclusive fashion. While Gordon does note some instances of indirect consultation of Catholic sources, there are too many jumps of assertion that require more detailed explanation and proof. The book would have worked better as an exhortation to approach American politics from a Catholic perspective rather than a largely unproven accusation of plagiarism.