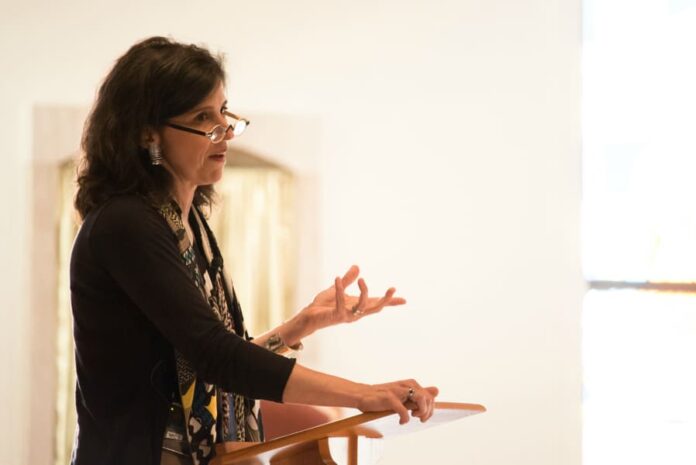 The word complementarity can rankle and disturb the secular world when mentioned in the context of marriage and work, yet professor Helen Alvaré said there is good reason to embrace it.

Modern secular thinking tends to find the concept of complementarity suspect, Alvaré told a crowd gathered June 1 at St. Thomas More Church in Centennial. The Church is taking a different view, sharing an increasing interest in the similarities and differences between men and women and advancing the belief that they are designed by God to complement one another for the benefit of family and society, she said.

“We’re in a situation where in the world at large, and particularly in connection with marriage, complementarity is suspect. In the Church, it seems to be assuming increasing importance,” Alvaré said.

The George Mason University law professor and co-founder of the initiative Women Speak for Themselves pointed to Pope Francis and his focus on the family.

He led a three-day Vatican conference titled “Colloquium on the Complementarity of Man and Woman” in Nov. 2014 that drew more than 30 religious leaders worldwide.

“‘Complementarity’ is a precious word, with multiple values. It can refer to various situations in which one component completes another or compensates for a lack in the other,” the pope said in addressing the conference.

He said Christians find their understanding in the First Letter of Paul to the Corinthians that says each person is endowed with different gifts and talents so as to benefit everyone.

“To reflect upon complementarity is but to ponder the dynamic harmonies which lie at the heart of all creation. This is a key word: harmony. The creator made every complementarity, so that the Holy Spirit, the author of harmony, could create this harmony,” the pope continued.

“Womanhood and manhood are complementary not only from the physical and psychological points of view, but also from the ontological. It is only through the duality of the ‘masculine’ and the ‘feminine’ that the ‘human’ finds full realization,” the late pope wrote.

“But a discussion of complementarity also brings forward … that one of the most important things about being human is being in relationship—that you were born in order to give,” she said.

She also shared Pope Francis’ address in St. Peter’s Square April 15, when he said attempting to remove these differences is the problem.

“The difference between man and woman is not for opposition, or subordination, but for communion and creation, always in the image and likeness of God,” he said. “The removal of the difference, in fact, is the problem, not the solution.”

Alvaré said historically a discussion on complementarity has led to a comparison between men and women, where one is ranked higher or better than the other.

“We live in a culture where when we say two things are different, we start ranking them,” Alvaré said. “We start saying, ‘Which one is better?’”

But it’s up to men and women to first acknowledge this pattern and misuse of the word complementarity. Alvaré said that this can be done by “providing a road map to exclude this misuse of the future. At the same time, I think a person who supports the reality and the notion of complementarity can often today, perhaps more surely than any time in the past, make a case for exploring the goods to be gained by acknowledging that there are differences between men and women and there are also qualities that overlap …”

Such an acknowledgment can lead to benefits both in the workplace and family life, she said. Instead of placing men and women’s gifts in competition with one another, she said they should be used to give to others and form relationships.

“We are built to be in relationship. That’s an essential aspect to loving God and knowing God,” she said.