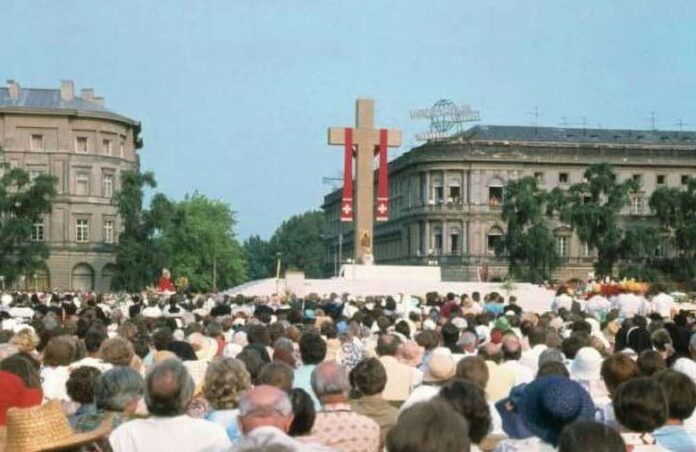 Forty years after Pope John Paul II bent the course of the 20th century in a more humane direction during his first pilgrimage to his Polish homeland in June 1979, new information continues to emerge about what happened behind the scenes, shedding further light on those epic events. The latest surprise involves a hitherto unremarked (and evidently impromptu) meeting of the Polish episcopate with the Polish pope in the middle of what’s become known as the “Nine Days.” Polish scholars recently discovered and published a transcript of that encounter, and kindly shared a translation with me while I was teaching in Cracow last month.

A bit of background helps set the scene for a powerful reminder that what may seem mere coincidence or randomness can, in fact, be providential — and instructive for the present.

Warsaw, Poland’s political capital from 1596 until the Third Polish Partition in 1795 erased “Poland” from the map of Europe, was absorbed into the Russian Empire after the Congress of Vienna in 1815. The Russian authorities immediately began an intense and often brutal program of Russification, which included banning the use of the Polish language in public administration and the courts. One physical expression of this determination to eradicate Polishness in Warsaw was the Alexander Nevsky Cathedral, built in city center on Saxon Square between 1894 and 1912.

Speaking at Warsaw’s Royal Castle, the Russian czar had told Poles to abandon all hope of recovering their independence, and the new Russian Orthodox mega-church — with a bell tower designed to be the highest point in the city — was meant to underscore this brutal diktat. At the cathedral’s dedication in 1912, the local Russian Orthodox archbishop said that “The creators of this cathedral had nothing hostile in their thoughts towards the unorthodoxy that surrounds us: coercion is not in the nature of the Eastern Orthodox Church.” This was, of course, poppycock. The Nevsky Cathedral was nothing but a hostile politico-nationalistic act; the Russian Orthodox Church had long been an instrument of Russian state power; and, as Archbishop Nicholas himself admitted (however clumsily), the cathedral was intended to juxtapose Russian Orthodoxy to the “unorthodoxy” of  recalcitrant Poles who clung to their heretical Catholicism.

In the aftermath of Poland regaining its independence in 1918, the Nevsky Cathedral was demolished, to restore a great public space while removing an affront to Polish sensibilities. After Hitler destroyed Warsaw in 1944, Saxon Square was recreated in the rebuilt capital, although Poland’s communist overseers renamed it “Victory Square.” And it was there, on June 2, 1979, that John Paul II celebrated Mass before hundreds of thousands of Poles and famously called on the Holy Spirit to “renew the face of the earth….of this land.” It was an electric rhetorical moment with consequences as great as Winston Churchill’s 1940 declaration, “…we shall never surrender!” And its providential character was identified in poignant remarks by Cardinal Stefan Wyszynski, the heroic Primate of Poland, when John Paul met with the Polish bishops on June 5, 1979.

“I was raised in Warsaw schools,” the Primate recalled. “I know Warsaw from before World War I….In the exact spot where the Holy Father stood was the apse of a huge czarist church, placed there on orders of the czar, to serve as the ultimate defamation of Poland and the [Catholic] Church… So the Holy Mass [in Victory Square] was a huge experience for me, a huge shock, because I was sitting in the very same spot where once had stood that czarist church and I was looking at the Pope celebrating the Holy Mass where the…main ceremonies of the czarist power were once celebrated; and everything [in my memory] disappeared [because] the Pope was celebrating a Mass in that exact spot…”

Like many others, I’ve been thrilled by that epic moment as captured in films and documentaries, but I had missed the extraordinary, providential coincidence: John Paul’s great Victory Square homily took place precisely where a simulacrum of piety had been built to underscore the religious subjugation of a people and their alleged “unorthodoxy.” God is not without a sense of ironic humor, it seems (although this particular exercise in the divine irony may not be well-appreciated in Vatican circles where the memory of Russian Orthodoxy’s historic aggressiveness toward “unorthodox” Catholicism seems to have been erased).

Catholics may, and indeed must, forgive. But we should also remember. Because forgetfulness can lead to something worse: like a dangerous falsification of reality.