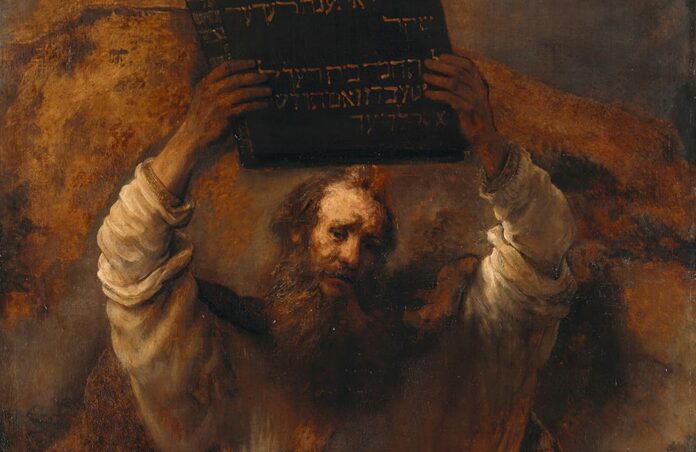 Ten years ago, I began a most extraordinary Lent by walking up the Aventine Hill to the Basilica of Santa Sabina on the first day of the Roman station church pilgrimage – an eight-week journey that led to the book Roman Pilgrimage: The Station Churches, co-authored with my friend Elizabeth Lev and my son, Stephen. Liz Lev is the premier Anglophone art-and-architecture guide in the Eternal City, and her masterful descriptions of the Roman stational churches confirm the truth suggested by Stephen’s evocative photographs (best appreciated in the e-book edition of Roman Pilgrimage): beauty opens windows into the deep truths of Catholic faith. My contributions to the book – reflections on the liturgical readings of each day from Ash Wednesday through the Octave of Easter – helped make that Lent a particularly rewarding one, as writing those meditations made me dig deeper into the readings from Mass and the Divine Office.

Every Lent, the Church reads the first 20 chapters of the Book of Exodus in its daily prayer, the Liturgy of the Hours. Familiarity, alas, can mute the power of that inspired book, the linchpin of the Old Testament. During Lent-2011, I found new meaning in Exodus through a closer reading of the commentaries by the Fathers of the Church that accompany the story of Moses and the nascent people of Israel in the breviary. The first millennium Fathers drew spiritual nourishment from Exodus because they treated the second book of the Torah as a source of wisdom, not as an artifact to be dissected. This year, my Lenten journey through the Book of Exodus will be further complemented by the commentary of a contemporary man of wisdom, Leon R. Kass.

Despite its many confusions, our era has somehow contrived to produce the ideal teacher in Leon Kass: learned humanist, medical doctor, bioethicist of distinction, gentleman and wise counselor – a Jewish scholar who once helped Catholics at the Pontifical Gregorian University read the Scriptures as they’d never done before. Kass’s new book, Founding God’s Nation: Reading Exodus (Yale University Press), complements his previous epic, The Beginning of Wisdom: Reading Genesis (Free Press); both books grew out of many years of an intense, searching exploration of those biblical texts with students. And out of that open-minded reading of Exodus, a familiar story takes on fresh meaning: now, through Kass’s commentary, Exodus offers us a profound reflection on what it means to be a true people, not merely an aggregate of individuals or a network of families.

What makes a people, a nation? According to Exodus, a nation needs a shared story. In the case of the people of Israel, that was and remains the story of their deliverance from slavery in Egypt, where bondage prevented them from being truly a people. A nation also needs a founding event, in which the people consent to a common way of life. In Exodus, that constituting event is the free acceptance (as Kass winsomely puts it), of “a yoke that becomes a tree of life” – the Sinai covenant, the Ten Commandments, and the Mosaic Law. And a true people need a worthy response to the human aspiration to be in touch with something greater than ourselves. So Exodus instructs its readers to reject false worship (the golden calf) for the sake of true worship – the worship of the One who alone is worthy of worship; the One who enters history to liberate his people and asks them to follow his path into the future.

The Book of Exodus thus raises important questions about our contemporary American situation. Can we be the self-constituting nation of the Constitution’s preamble – “We the People of the United States” – if future generations are taught a false story of America by the New York Times’ mendacious “1619 Project,” now being imposed on schools around the country? Can we be truly a people if, instead of the preamble’s purposeful, covenantal commitment to form a “more perfect Union” that will “secure the Blessings of Liberty to ourselves and our Posterity,” our relationships as citizens are merely transactional – you get something, I get something? Can we be a true nation if we worship the false god of wealth, bow to the false messiahs of identity politics, and indulge the false ethic of “I did it my way”?

There is much to think and pray about this Lent. The Book of Exodus is a good companion on the journey, and Leon Kass is an admirable guide to the truths found in that great book.