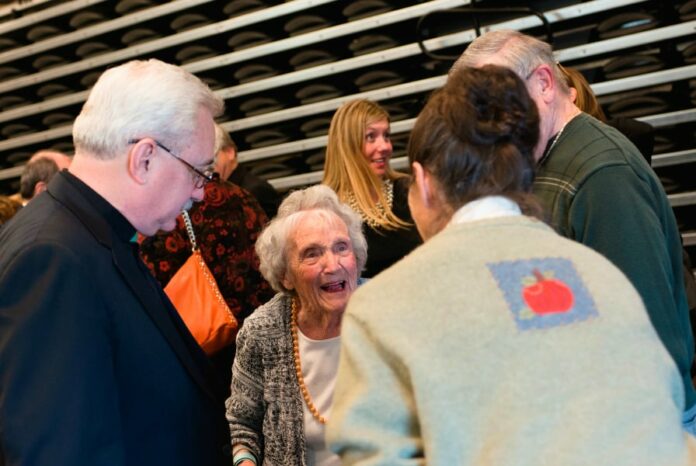 “Everybody loves Bernie”; “We love you”; and “You will be missed” were some of the phrases floating around the room at Regis University’s retirement celebration for Bernie Langfield Oct. 29. After 37 years of service to Regis’ faculty, alumni and students, the 93-year-old retired from her job at the university.

“You touched the lives of countless people. We are truly grateful for your 37 years at Regis,” Jesuit Father John Fitzgibbons, university president, told her at the celebration.

“You embody values that make Regis great,” he added. “I am always amazed by how students gravitate toward you. Maybe it is something about being a mother of 11.”

Father Fitzgibbons explained how Langfield served as a surrogate mother for homesick students who needed some loving care. She baked cakes for their birthdays, mended their clothes, and invited them into her home.

“She is leaving a personal legacy,” said her daughter Kristie Langfield, who works in data processing at Regis.

Langfield, twice widowed, began working at the university’s bookstore at the death of her second husband. Her first husband, Second Lt. James Shelton Doyle, Jr., was killed in Germany in World War II. In 1946, LIFE magazine interviewed her, now a single mother with two children, for a story asking war widows about the likelihood of marrying again. She told the reporter she was undecided at that time. She later married Al Langfield, and had nine more children.

After working in the bookstore, Langfield soon moved to a job in the University Advancement Office. In addition to her administrative assistant duties, she coordinated a monthly memorial Mass for Regis alumni to pray for deceased family members. Each month she mailed more than 700 invitations to these families.

Many times she served as a panelist for Regis University’s Center for the Study of War Experience, a program dear to her heart, she said because of her husband’s service during war. Once when serving as a panelist, she heard a visiting professor make disparaging remarks about the military decoration, the Purple Heart, an honor awarded to those killed or wounded while serving in the military.

“He got my Irish up, so I spoke up and said my husband was killed in World War II,” she explained, “and he earned his Purple Heart.”

Langfield cherishes her years at Regis.

“I will miss everyone, especially the students and my colleagues in University Advancement,” said Langfield, who has lived most of her 93 years in north Denver, and plans to spend more time with her family and loved ones during retirement.

Langfield’s, and her family’s, support of Regis University and Catholic education, has become a tradition. Her parents, William and Alice Secord, who lived near the old Elitch Gardens amusement park in the West Highlands neighborhood, helped establish Holy Family Parish at 4377 Utica Street when founded as a Jesuit mission of Sacred Heart College (now Regis University) in 1889.

When both Regis and Holy Family high schools were located in north Denver, her five sons attended the all-boys school and her six daughters went to Holy Family. Nine of her children and six of her grandchildren attended Regis University. Four of her daughters also have worked at the university.

Her daughter Wendy Wessling traveled from Nebraska to attend the retirement celebration.

“She is an amazing woman,” Wessling said.