His Church. Our Experience.
Subscribe
HomeLocalThe event of Christianity, a thing of beauty
Local

The event of Christianity, a thing of beauty 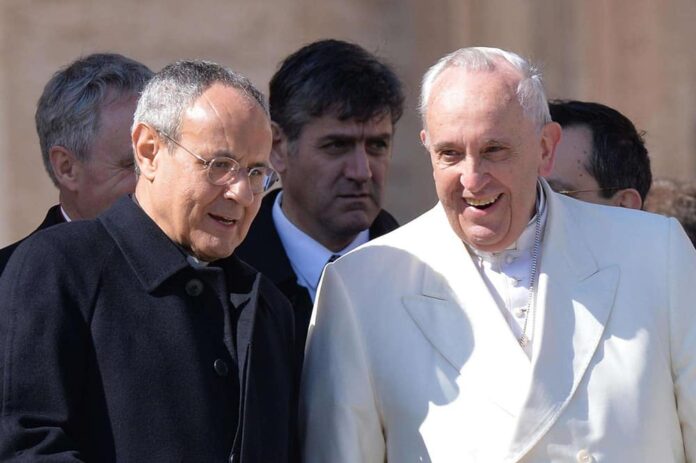 When Christianity is reduced to a mere set of precepts or dogmas, living out one’s faith could be perceived as a burden, and the faith could seem to be something not connected to “real life”.

But when the faith is lived out as a relationship that began with an encounter with a person that we find so fascinating that we couldn’t imagine living another moment without Him, it becomes a thing of beauty, says the president of the Fraternity of Communion and Liberation, Father Julián Carrón.

Father Carrón is the successor to Father Luigi Giussani, founder of the movement known by its members as “CL,” and the author of Disarming Beauty: Essays on Faith, Truth and Freedom (Notre Dame Press, 2017).

In this interview with Denver Catholic, Father Carrón speaks more deeply about what he calls the “event” of Christianity, and what we can do to be profound witnesses for our culture.

Q: In Disarming Beauty you speak of Christianity as “an event” that is “full of attractiveness,” and which “seizes human beings with its beauty.” For many, being Catholic boils down to going to Mass on Sunday, which is often found to be, to put it bluntly, boring and of little consequence to “real life”. How can we as Catholics rediscover that “event” of Christianity and recover a sense of the beauty of the faith?

Father Carrón: It is enough to observe what happens in the life of each one of us when we find a really significant person for our life (for example, when we fall in love). It is an event that takes us out of boredom and fills life with fullness. In an analogous, but infinitely more appealing way, this was what happened at the beginning of Christianity. The first encounter of Jesus with John and Andrew shows that when someone is fascinating, one cannot help but wish to see him again the next day. They met someone so exceptional that they wanted to be with Him. Being with him was the most beautiful thing that could have happened in life. What does exceptional mean? That which corresponds to what the heart is waiting for. And it wasn’t just the disciples. The same happened to the publicans, as we see after the call of Matthew: they gathered to eat with him. Going to Him, to be with Him, must be a habitual thing, as the Gospel says: “The publicans were drawing near Jesus.” What would they have seen in Jesus to exclaim, “We have never seen anything like this.” When I was a religion teacher and said these things to my students, they told me: “What the Gospel says is beautiful, but this doesn’t happen anymore.” That made me understand that so many people find Christianity reduced to rites, with no connection to life; or to a set of things to be fulfilled. For them Christianity is not an event as it was for John and Andrew. What we’re all waiting for is for something like what happened to them to happen to us. Is it possible? Yes…when we find someone for whom Christ is so significant that he has changed his life. When we find Him, we cannot live without Him.

Q: Freedom is a major theme of the book, and you describe freedom as “a gift” from God, who chose to create us as free beings. The tendency of secular culture, and this includes Catholics to the extent that we are all in some way products of our culture, is to view the moral teachings of the Church as impositions from outside of ourselves, and as constrictive and burdensome. How can we reconcile the demands of living a Christian life with our condition as free beings?

Father Carrón: I understand that if Christianity is reduced to a set of precepts to be followed, the Christian life is perceived as an unbearable burden. No one would marry just to wash dishes, get the groceries or clean house. One gets married because he has found someone so significant that he does not want to lose out on living his life in her company. Then, because you want to create a beautiful environment to share with the loved one, you decorate the house or clean it, or make a good meal. No one who lives an experience like this has the perception of losing his freedom. On the contrary, he has a sense of fulfillment. Ultimately he is free, because he has found someone who, by her presence, fills his life with joy. On so many occasions, we see that love cools and we begin the search for someone to re-enchant us. This also happened in the time of Jesus. The Samaritan woman had been married to five husbands, but she was still unsatisfied. It was then that Jesus challenged her with an unexpected and surprising promise, offering her water that could satisfy her. Who among us would not have asked as she did, “Give me this water”? Only those who find that water are free, because freedom is the fulfillment of the desire for happiness that we all have. Being a Christian is the most fascinating thing anyone can imagine because Jesus has come as a response to this desire.

Q: Let’s talk about a very common difficulty for Catholics today. A young couple decides to begin a large family as a beautiful way to build up the culture of life, but soon finds the day-to-day grind of raising small children more than they can handle. They feel guilty about admitting how hard it is, and they feel guilty about not wanting more children, and even more guilty because they find natural family planning very difficult. What advice would you give to this couple?

Father Carrón: Find people in your parish, association or movement who live Christianity as something fascinating, and who can accompany you as you live this situation. Only within a Christian community can we live the life that the Church proposes to us. It is useless to waste time blaming yourself. Only a living Christian community can look at us with the gaze of mercy we need to be sustained along the way. It is an adventure only for bold people, who do not surrender to the difficulties. This is one of the advantages of our time, that we will eventually be Christians, not by obligation or tradition, but because of our fascination with Christ. We don’t want to lose for anything in the world. With Him we can challenge any difficulty, because each circumstance will become an opportunity to see how Christ will also win over the situation. Thus, love and gratitude for Christ will grow in us because of the tenderness with which He cares for us.

Q: You speak eloquently of “the discovery of the ‘I’”. You write: “Nothing is so fascinating as the discovery of the real dimensions of one’s own ‘I’, nothing so rich in surprises as the discovery of one’s own human face. This is a thrilling adventure, but to set out on this adventure and vanquish our extraneousness from ourselves, we need someone to look at our humanity with us, someone who does not balk before it.” Would you be willing to share a little bit about your own experience of self-discovery, and how you found someone to help you look with honesty at your own humanity?

Father Carrón: I was able to discover my own nature when I encountered people who awakened in me an awareness of my humanity. Then, I began to look at my desires and my aspirations, with affection; to look at them not as something to repress but as something to take care of, because God has made me with such a great desire for happiness to be fulfilled. “Look how human your humanity is,” a friend told me. I understand that without such a gaze, we look at our most human needs with suspicion. I have always been impressed that the ancient world before Christ looked with suspicion on their deepest aspirations; they seemed to them inordinate. That is why hubris, excess, was considered dangerous. Desires had to be reduced. The ideal was to be content with a little less than what they wanted. Only the arrival of Christ allowed for a profound gaze on man. “What good is it for a man to gain the whole world if he loses his life,” said Jesus. Since then, man has been able to come face-to-face with all of his constitutive desires because there is Someone who fulfills those desires. “You have made us for yourself, O Lord, and our heart is restless until it rests in you.” Only Christ saves the desire of man’s heart.

Q: You write that the role of Christians in a pluralistic society is “to be ourselves, witnessing to the new life that springs from the encounter with Christ.” What are a few steps we can take today to be better at giving witness to the reality that “God exists and he has given us life?”

Father Carrón: Whoever has found a living Christian experience cannot avoid being changed, transformed in time. I am struck by a passage from the Acts of the Apostles that shows what kind of person emerged from the experience of living with Him. “Observing the boldness of Peter and John and perceiving them to be uneducated, ordinary men, they were amazed, and they recognized them as the companions of Jesus”(Acts 4:13). The coexistence with Jesus had made them into people who impressed the leaders of the community. The decisive step to be a witness is to live within a Christian community in which new men and women are born. New creatures, Saint Paul calls them. This change is so eloquent, so incapable of being generated by ourselves that, as in the case of Peter and John, those who meet us cannot help but think of Jesus.