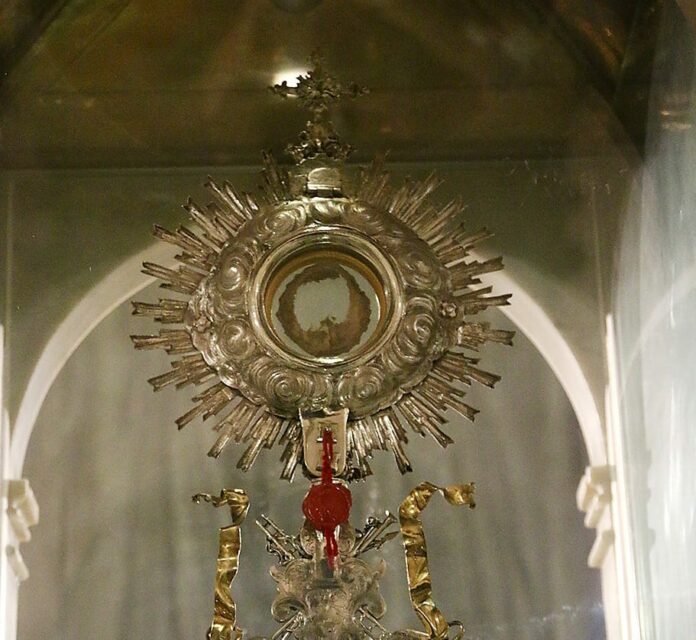 Over 2,000 years ago, Jesus Christ walked the earth, performed miracles and was eventually crucified, offering up his life for the salvation of souls.

Jesus had a body just like us. And it’s possible we know his blood type.

The Church teaches and has taught since the time of Christ that something miraculous happens at every Mass.  When the priest offers the bread and wine during the Liturgy of the Eucharist, something called transubstantiation takes place — the bread and wince become the actual Body and Blood of Jesus Christ. Though they look like normal bread and wine, Christ is in fact present in every morsel of bread and every drop of wine.

But sometimes the appearance of the bread and wine change, too. Christ’s true presence has been revealed over the centuries through several Eucharistic miracles.

As the Church celebrates the feast of Corpus Christi, in which we celebrate the real presence of the body and blood of Jesus Christ in the Eucharist, our faith in the mystery of the sacrament is not in vain.

One of the most famous miracles took place in Lanciano, Italy during the eighth century, when a priest was doubting the real presence during Mass. As he consecrated the bread and wine, the bread began to bleed, literally turning into flesh and the wine into blood.

Soon after, the blood coagulated into five globules, and the flesh remained unchanged.

In 1971, Pope Paul VI permitted scientific studies be done on the relics — which still remained unchanged after centuries — and scientists discovered the flesh has the structure of the myocardium and endocardium.

The blood is human and type AB.

Three Eucharistic miracles occurred in Buenos Aires during the 1990s. In 1996, then-Bishop Jorge Bergoglio (now Pope Francis) was auxiliary bishop when a consecrated Host was found on the floor and soon after placed in water.

A few days later, the Eucharist had turned into bloody flesh. When the flesh remained unchanged years later, it was taken for sampling, and those who tested it weren’t told what it was or where it came from.

The findings revealed the sample was part of a heart muscle, specifically from the myocardium of the left ventricle. The blood was discovered to have human DNA and the AB blood type. Further study found the heart had been tortured, and the samples were even pulsating while they were studied.

Not all Eucharistic miracles consist of the Host turning into flesh and blood. A more unusual miracle occurred in Bordeaux, France in 1822, when witnesses claimed they saw an apparition of Jesus giving a blessing during adoration.

And in Trivandrum, India in 2001, the pastor at the time exposed the Eucharist in a monstrance for adoration. Shortly after, three dots appeared on the Host.

A week later, the priest looked inside the tabernacle to see what happened to the Host, when he and those present noticed a figure that looked like a human face, and the image grew clearer as time went on.

The priest then read a passage from the day’s readings, and it happened to be from John 20 when Jesus appears to Thomas, showing him his wounds.

Like the apostle Thomas, we sometimes long for substantial proof of Christ’s real presence in the Eucharist. It’s easy to doubt such an extraordinary event could take place. Let these miracles revamp your trust in Jesus on the upcoming feast of Corpus Christi and beyond.