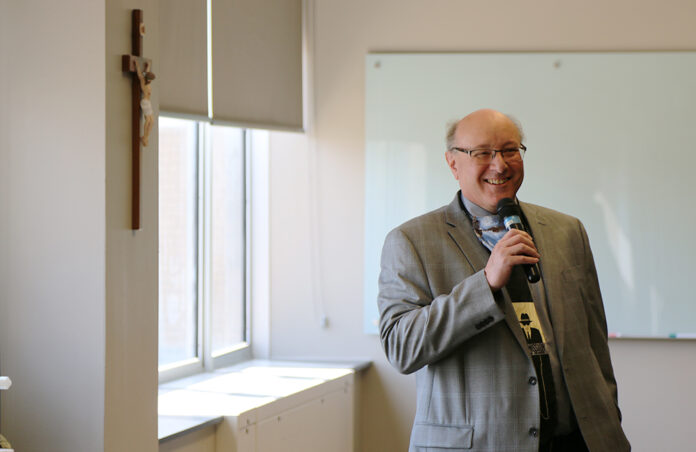 After an illustrious and devoted 40-year career working for the Archdiocese of Denver, longtime Director of Parish Finance Ernie Armstrong bid farewell on April 1 to accept a new role as Chief Financial Officer for the Diocese of Salina, Kan.

Armstrong began his long tenure with the archdiocese in 1982 when he was hired as the Business Manager for St. Joseph’s Parish in Fort Collins. After a stint in the same position for Most Precious Blood Parish, he began working for the chancery as the Director of Parish Finance and Parish Controller in 1991, and remained in this role until his recent departure.

There’s not a single parish in the archdiocese that Armstrong hasn’t been involved with in some capacity, and he has earned a reputation among pastors and parish staff that precedes him. Despite his many accomplishments over the years, Armstrong remains humble.

“There’s lots of things I’ve done, but I think I can honestly say that just just being able to work with so many people in our Church that are working so hard to build the kingdom is really what drives me here,” Armstrong told the Denver Catholic.

Some of his more notable accomplishments include playing an instrumental role in producing the Pastoral Handbook for the archdiocese, which is a critically important guide for employment within the Archdiocese of Denver. Another major achievement of his career was taking the lead on the transition of all parishes to a standardized, all-digital accounting system. And that’s only the tip of the iceberg. Even so, Armstrong is the first to say that he couldn’t have done any of it without the team of people he’s been blessed to work with.

“I converted all the parishes from manual to a computerized accounting with the help of my team, my department,” Armstrong said. “I’ve always had great people on my team. I have always been able to find great, committed people that love this Church as much as I do.”

For many who work at the chancery, Armstrong has been a mentor and a constant colleague who possessed an invaluable depth of institutional knowledge.

“I am deeply grateful for my six years working with Ernie,” said Keith Parsons, Chief Operating Officer for the archdiocese. “He has mentored me in the operations and organization of the Church and taught me how to navigate various aspects of it.  Ernie is a man, a husband, a father who has given all his heart to serving the Church.”

Even those who haven’t had the pleasure of working with Armstrong for more than a year have been impacted by his dedicated service to the Church.

“It has been a distinct honor and privilege to work with Ernie during my short time as CFO,” said Brenda Cannella, Chief Financial Officer for the Archdiocese of Denver. “His love for the Church and for our parishes, priests and staff is evident in all that he does. Anyone who has met or worked with Ernie knows that he radiates joy and deeply cares for those he serves. We will miss him greatly on our team at the Pastoral Center.”

While the financials of Church ministry may not be the most glamorous job, it is an extremely important one, and it is a job which Armstrong carries out faithfully and with the utmost attention to stewardship. As Armstrong says, “the money is important, but it’s only important in terms of providing resources for us to accomplish something in the faith.”

“Even though I’m a finance guy and part of my goal is to make sure that our parishes manage their finances effectively and efficiently, it’s all about what we’re here to accomplish,” he continued. “It’s easy to talk about the Church in terms of money, but the money is there to accomplish something that we call our encounter with Christ. People want to talk about the money … but in the end, it’s what do we do with it that defines who we are and how we live our faith.”

Armstrong’s commitment to the Church over the past 40 years serves as an example of how each person is called to use their unique skills and talents in service to the Church, and how all the moving pieces of the Church’s operations should be oriented toward one end – an encounter with Christ.

“When we forget that every moment is a moment of evangelization, then we’ve lost touch with what we’re supposed to be doing, and that happens in the parish,” Armstrong shared. “Scripture doesn’t say, ‘wherever two or more of you exchanged email, there I am.’ And I think that’s what’s so important, is supporting our parishes to be able to help people with that encounter of Christ that occurs on the one on one basis. All the resources, the buildings, the money, the personnel – all of it has to be focused at that point in time.”

“The thing I’m going to miss is all the all the faithful people working so hard on behalf of this Church,” Armstrong concluded. “They’re so faithful, they’re so dedicated to his Church and they have such a love for God. That’s what inspires me, and that’s what keeps me motivated every day to come in and work hard on behalf of the Church. I can’t think of anything more important for us to be doing than trying to bring God’s love to our culture.”