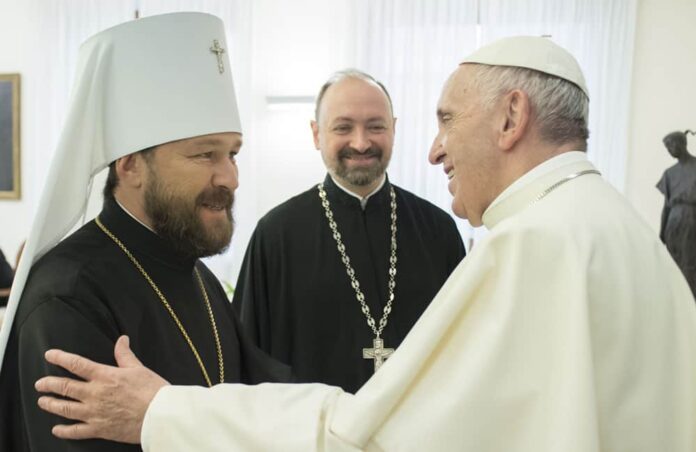 This past December 18, Metropolitan Hilarion of Volokolamsk, the head of the department of external relations of the Russian Orthodox Church, received an honorary degree from the Faculty of Theology of Apulia in Bari, on Italy’s Adriatic coast. During his remarks on that occasion, Hilarion thanked the Holy See “per la sua posizione di equilibrio riguardo al conflitto in corso in Ucraina [for its balanced position regarding the conflict underway in Ukraine].” Did anyone in the Vatican blush in shame at that compliment? A lot of high-ranking Roman churchmen should have.

Once again, as he has often done in the past, Metropolitan Hilarion used an ecumenical event to carry water for Vladimir Putin’s Kremlin and its war on independent Ukraine. Once again, the chief ecumenical officer of the Russian Orthodox Church misrepresented what is afoot in Ukraine, which is not a “conflict” but a Russian invasion and a low-intensity war, which has already cost more than 10,000 lives while displacing over a million persons and wreaking economic and social havoc in Ukraine’s Donbas region. And once again, Metropolitan Hilarion implicated the Holy See in that misrepresentation by praising the Vatican’s “balanced position.”

But what is a “balanced position” in this situation? A refusal to pronounce the words “invasion” and “annexation” when describing the reality of what Putin’s Russia has done in Crimea? A studied disinclination to use the word “war” to name what Russia has been conducting in the Donbas for the past several years? That, surely, would be more accurately described as pusillanimity and appeasement, rather than balance or equilibrium.

This “balance” is not only an abdication of moral responsibility; it is badly undercutting other Vatican goals in world politics. Shortly before Hilarion’s speech in Bari, a Vatican conference urged intensified efforts toward nuclear disarmament. Well, what has been the single greatest blow to nuclear non-proliferation in recent years? The Russian invasion and annexation of Crimea. Why? Because Russia’s actions effectively abrogated the 1994 Budapest Memorandum, according to which Ukraine agreed to give up all its Soviet-era nuclear weapons in exchange for a guarantee (signed by Russia, the United States, and Great Britain) of its territorial integrity and borders. After Russia got away with its Crimean gambit, it’s a safe bet that no nuclear weapons power will give up its arsenal in exchange for paper security guarantees, for at least the next several decades.

In brief: it’s impossible to take a “balanced position” on the “conflict underway in Ukraine” and, at the same time, passionately promote nuclear disarmament. The former drastically undercuts the latter. Can no one in the Holy See connect the dots here?

In the face of what reasonable people will judge the Roman appeasement of its enemies, the Greek Catholic Church of Ukraine – the largest Catholic martyr-Church of the twentieth century – has been a model of fidelity to Rome: which is another reason why those responsible for Vatican policy toward Russia and Ukraine ought to have blushed in embarrassment at Metropolitan Hilarion’s compliment. No one would blame the Greek Catholic leadership in Ukraine for feeling, if not betrayed, then at the very least ill-served by the “balanced position” praised by Metropolitan Hilarion. Yet, under the most trying circumstances, Major Archbishop Sviatoslav Shevchuk and his colleagues, both clergy and laity, have gotten on with the New Evangelization in their war-torn country, providing a model of spiritual vitality and effective public engagement that a lot of Latin-rite Catholicism would do well to study and then emulate.

Here is one dimension of the Vatican’s ecumenical and diplomatic activity that cries out for radical reform. It is long past time for a thorough reexamination of the default positions that govern thinking about Russia, Ukraine, the Ukrainian Greek Catholic Church, and Catholic-Russian Orthodox ecumenical dialogue in the Holy See’s Secretariat of State and at the Pontifical Council for Promoting Christian Unity. The relevant officials in those Vatican offices might begin that reexamination with a close reading of Serhii Plokhy’s fine new book, Lost Kingdom: The Quest for Empire and the Making of the Russian Nation from 1470 to the Present (Basic Books). Among other things, the Harvard-based Plokhy explores the subservient relationship of the Russian Orthodox Church to Russian state power for over five centuries: a history that puts Metropolitan Hilarion’s latest propaganda exercise in Bari into its proper context.