His Church. Our Experience.
Subscribe
HomeOn MissionFocusBefore all else, an evangelist: A Q&A with Bishop Robert Barron
On MissionFocusQ&A

Before all else, an evangelist: A Q&A with Bishop Robert Barron 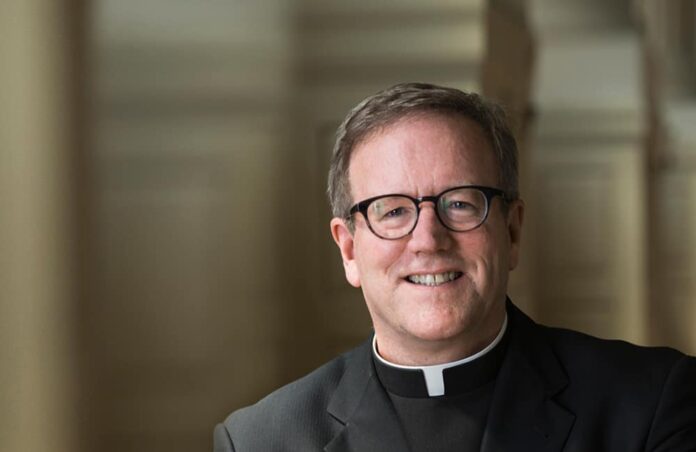 One of the Catholic Church’s boldest leaders, Bishop Robert Barron is somewhat of a celebrity in the Catholic world. He’s best known as the host of Catholicism, the groundbreaking documentary about the Catholic faith that aired on PBS several years ago, and this past year, he released a follow-up to that series entitled Catholicism: The Pivotal Players. He’s far too humble to ever recognize it, but Bishop Barron may very well go down as one of the Church’s pivotal players in this era of its history.

Bishop Barron was ordained an auxiliary bishop of the Archdiocese of Los Angeles in 2015, thrusting him from his primary role as an academic into a full-time pastoral job. Even so, Bishop Barron continues to be the great evangelist he is — a title he readily accepts — through his Word On Fire ministry, his TV series, and even his new book To Light a Fire on the Earth, written with John L. Allen, Jr. Bishop Barron will be tackling the topic of relativism at the next installment of the St. John Paul II Lecture Series Feb. 6 at Immaculate Heart of Mary Parish in Northglenn. Ahead of his visit to Denver, we caught up with him about his new book, how to live as a Catholic in the culture and what it means to be an evangelist.

DC: Where did the concept for your new book written with John L. Allen, Jr., To Light a Fire on the Earth, come about?

Bishop Barron: It came from the publisher at Image, a guy named Gary Jansen. He called up and asked if I’d be interested in doing a book like this with John Allen. He proposed it to me, and I found attractive a lot of things, but one was that I don’t have as much time as I used to to sit down and write books — I’ve got this full-time pastoral job, so I thought that would be an easier way to produce a book if we did an interview. So then about a week later, he called back and said that he talked to John and John was very open to it, so I said OK, let’s do it. John came out for about 25 hours of interviews – he came to my house here in Santa Barbara – and we just really went after it, talked about everything. John put those together, edited them down a little bit, and we finally produced the book.

DC: In the book, you say that you would happily accept the title “evangelist” above all else. What is it to be an evangelist?

Bishop Barron: Someone that declares the dying and rising of Jesus and invites people to share a life in the Church — I think that’s what an evangelist does. To me, it’s an englobing term. I’ve spent a lot of my life as an academic, as a teacher, as a writer, and I try to bring all of that to my evangelical work because I think that’s the fundamental form of the Church’s proclamations. Everything else that we do — all the different writing and speaking and teaching – is under that rubric finally, is to bring people to Christ. I like that title; I’d be happy to be called an evangelist.

DC: What are the essentials for Catholics today to stay clear from all the noise and distractions and truly live their faith in a compelling way?

Bishop Barron: I think to learn the Biblical story. Our culture is forgetting the Biblical story, and when you do that, then you don’t understand what it means to say that Jesus Christ is Lord, because that makes sense only against the background of the Old testament story. If we forget that, then Jesus devolves very quickly into being a teacher of spiritual truth. You watch all the talk shows and stuff like that, that’s what he’s presented as, and that’s the fruit – the very bitter fruit, I would say – of having forgotten the Biblical story. I would urge Catholics to learn the Bible. Vatican II called for this deep renewal of Biblical theology, and I don’t think it’s happened really, and that’s, to my mind, the single most important thing.

DC: One of the biggest challenges the Church faces is capturing millennials. What gets their attention?

Bishop Barron: [With Word on Fire], we’ve tried to begin where millennials are; so first of all, to move into the virtual space, move into the world of social media just to be there, and then to start not so much with the doctrine, but to start with the things that intrigue people today. That’s where the books and movies and music and all that come in – that’s part of it. Another part of it is that millennials have a lot of serious intellectual questions about religion; for example, the issue of religion and science is a major stumbling block for millennials. So, I’ve done a lot with that. Thirdly, they’ve been very affected by the new atheists. Millennials, or now iGen-ers, the current generation, came of age with this very strong public critique of religion with people like Christopher Hitchens and Richard Dawkins and Sam Harris, and I find dealing with younger people, they use the language of the new atheists all the time. I’ve done a lot with trying to engage the question of God and why it makes sense to believe in God. Those are all approaches I’ve used.

DC: You’ve always had a way of viewing pop culture through a lens of faith, such as with your commentary on popular films. Do you think Catholics are too mistrustful of getting to know a culture that doesn’t share their same values?

Bishop Barron: The culture is always a mixed bag – it always has been. It’s both good and bad. But we can’t afford to be so squeamish that we just absent ourselves from the culture or cast dispersions upon it, because then we miss all kinds of opportunities. What you find in the culture are bits and pieces of Christianity all over the place. Years ago, I had a great teacher at Catholic University, Robert Sokolowski, and he talked a lot about the explosion of the once-integrated Catholic vision that happened around the Reformation and the Enlightenment. But what we see, then, are the twisted pieces of that once-integrated whole here and there in the culture. They’re not in perfect shape, they’re not perfectly integrated, but they’re pieces of the Catholic worldview, and I think that’s true in films and books and music and all sorts of things. I try to point that out when I can.

But it’s the culture; there’s no one answer. It’s always both/and. The culture is good, the culture is bad. The culture reflects the Church, the culture opposes the Church. The evangelist has to be adept enough to both criticize and integrate, and that can get both sides mad. If you start critiquing culture, then you’re a culture warrior, and if you embrace the culture, then you’re a relativist and an accommodationist. Well, the point is, you’re both a critic and a celebrator of the culture; you’ve got to be able to pivot and weave and make your way through the culture. I learned that from my great mentor Cardinal George of Chicago. He was a great one for the evangelization of the culture. He never liked when people said they were culture warriors; he said it was like a fish saying I’m against the ocean. The culture is, whether we like it or not, the air that we breathe; the ocean is full of all kinds of junk and pollution, and it’s what the fish lives on. The same is true of our culture; it’s full of all kinds of unsavory things, and it’s also the air that we breathe. You can’t just stand against it.