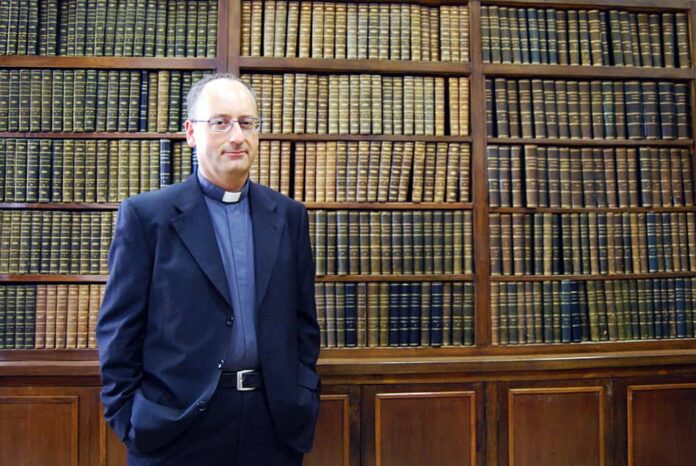 Defending the indefensible is never pretty. Or so we’re reminded by recent attempts from the portside of the Catholic commentariat to defend the madcap analysis of America’s alleged “ecumenism of hate” that appeared last month in the Italian Catholic journal, La Civiltà Cattolica (edited by the Jesuits of Rome and published after vetting by the Secretariat of State of the Holy See). The more sober-minded defenders admit that the article, jointly authored by Fr. Anthony Spadaro, SJ, and Pastor Marcelo Figueroa, contains errors of fact and tendentious interpretations of recent history – but then go on to suggest that it raises important questions. How, though, are serious questions raised, much less clarified or answered, by falsifications of both history and contemporary reality?

Other defenders of the Spadaro/Figueroa article, less chastened by the self-evident fact that the article would receive a thumping “F” in a freshman religious studies course at any reputable college, have taken the occasion of the article to scrape their various boils and indulge in the very Manichean division of the ecclesial world into children of light and children of darkness the article condemns. One of these boils involves a project I helped launch and in which I’ve been engaged for over two decades: the study group known as “Evangelicals and Catholics Together.”

A post Spadaro-Figueroa editorial in the National Catholic Reporter charged that ECT, as it’s widely known, is a prominent example of “Catholic complicity in the politicization of faith;” that the participants in the original ECT statement, from which the study group takes its name, were on the “outer conservative edges” of their communities “before the landscape fades to irrational extremes;” and that the original statement “ill-served” Catholics, evangelical Protestants, the cause of the Gospel, and the health of American public life. Moreover, the NCR grimly warns “bishops and those who staff their offices” against conceding to “the visions of ideologues in think-tanks and institutes with an absolutist and narrow agenda.” For in doing so (by, presumably, embracing the ECT agenda) these bishops and staff “have squandered their standing and credibility in the wider culture.”

Oh, dear. Where to begin?

ECT is an ongoing project, which has now produced nine joint statements, with a tenth, an explanation of Christianity to its contemporary cultured despisers, coming soon. Five of the first nine – on justification, Scripture, the communion of saints, the universal call to holiness, and the Blessed Virgin Mary – were entirely theological in character and had nothing to do with political controversies. Those that touched on contested issues – the statements on the sanctity of life, on religious freedom, and on marriage – set the discussion of public policy in an explicitly biblical and theological context (as, indeed, did the initial ECT statement the Reporter editorial deplores).

The five theological statements measure up well against similar documents from other ecumenical dialogues of the past half-century; an honest Catholic liberal, Notre Dame’s Lawrence Cunningham, recommended all the ECT statements for “the pertinence of their concerns and the sophistication of their theological argument.”  From the very outset of our joint work, ECT participants have made it clear that we speak from and to our various Churches and ecclesial communities, not for them. We have also scrupulously described our differences, with a concern for expressing the “other’s” views accurately.

But don’t just take my word for it. Get the book that collects the first nine ECT documents and explains both the genesis of the project and of each statement: Evangelicals and Catholics Together at Twenty: Vital Statements on Contested Issues, edited by Timothy George and Thomas G. Guarino (Brazos Press). Read it. Then compare what you read with the NCR editorial.

In his June address to the U.S. bishops, Archbishop Christoph Pierre, the apostolic nuncio to the United States, appealed for a Church that listens more, “even to those with whom we disagree,” because the honest engagement of differences helps us all “propose the…Gospel in a more persuasive, life-changing way.” True enough. The honest engagement of differences in service to evangelical vigor is not advanced, however, by the systematic misrepresentation of others’ views, by the puerile bullying of bishops, or by indulging in spasms of influence-envy. Moreover, the Nuncio’s welcome appeal to become a Church of missionary disciples – Pope Francis’s “Church permanently in mission” – will only be answered if we see today’s challenging, but evangelically exciting, situation clearly; and such clarity of vision requires something other than lenses ground in the 1970s.