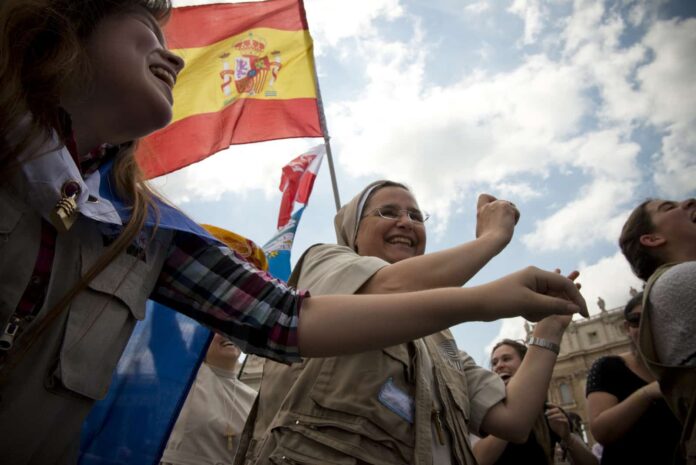 It’s canonization eve, and Rome is bustling with activity as the final preparations are being made for the double canonization of Pope John Paul II and John XXIII.

DCR special correspondent Linda Del Rio was on the ground in Rome today checking out the altar to be used for the April 27 canonization Mass, and ran into Maite Mijares, a representative from Ecuador’s trade office in Italy.

Mijares reported that some 40,000 flowers, mainly roses, will adorn the altar for tomorrow’s celebration, and most of them were donated by the South American country of Ecuador.

She said they began the preparations three days ago, and that Ecuador is happy to be a part of the celebration. Check out the interview below with Mijares.

Also on the ground in Rome is Jeffrey Bruno, a great friend of the DCR. He’s been taking photos for Aleteia, and has generously shared some of them with us.

These are snapshots from canonization eve.

Bruno also attended an evening procession with the World Youth Day cross through the streets of Rome.

These are his words: “The event began at the Centro San Lorenzo, which is the Chapel in Rome that houses the WYD Cross. Mass was celebrated with a completely packed Church filled with young adults and teens from all around the globe.

“This was followed by a joyful procession through the streets of Rome inviting those who were met along the way to join them in their journey to Piazza Navonna. What followed next was entrance into Sant’Agnese in Agone (Church) in which a full program of activities. It began with personal stories of the impact that Blessed John Paul II and Blessed John XXIII had on the lives of the speakers, and also stories of intersessions and answered prayers.

“This was followed by Veneration of the WYD Cross and ultimately finishing with Benediction and Adoration of the Most Holy Sacrament of Jesus Christ in the Eucharist. The event spanned several hours, was attended by hundreds, and was perhaps one of the most powerful experiences in this photographers life.”

These are his photographs.