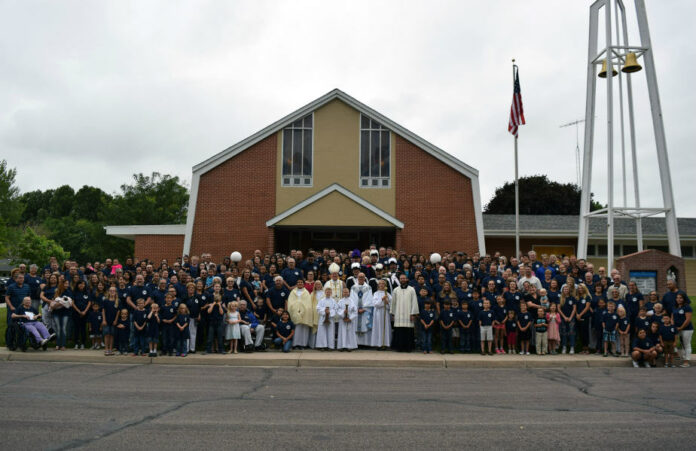 While St. Mary Parish in Brush is 106 years old, the church building itself just marked its 50th anniversary on June 19.

To honor the milestone, on June 25 parishioners donned blue T-shirts—the color for Mary—to attend Mass celebrated by Archbishop Samuel Aquila and concelebrated by the pastor, Society of Christ Father Marek Ciesla, who hails from Poland.

After the liturgy, the congregation gathered on the church steps for a parish photo then enjoyed an abundant potluck meal provided by the families.

“We have people who are salt of the earth—farmers and ranchers—but the majority live in town,” Father Ciesla told the Denver Catholic about his 350 registered families. “They come together in a beautiful way, supporting each other, very open, very welcoming.”

A community of 6,000 people nestled in the South Platte River valley 90 miles northeast of Denver, Brush proudly declares it offers “homegrown happiness.” Parishioners say that’s true about their town and their parish.

“We always viewed it as God’s happy acre,” Marjorie Chapman, 80, told the Denver Catholic about St. Mary’s, a brick church with an open frame bell tower located at 340 Stanford St.

A member of the parish since she was in the third grade, Chapman had the privilege of carrying up the gifts during the Mass with fellow longtime parishioner, Norma Wolfe, 84.

“I made my first Communion, confirmation and was married at St. Mary’s,” Chapman said, adding that she also served as the parish secretary for 10 years.

Widowed 15 years, Chapman’s four children and some of her grandchildren have made their sacraments at the church. Two sons who live “within shouting range” of her home continue to worship there and are active Knights of Columbus. Chapman is a member of the Altar and Rosary Society, which provides a free potluck reception to families after funerals. She and Wolfe were among those in the kitchen helping to get the food ready after the anniversary Mass.

“It’s my life,” Chapman said about her church. “It’s the life of our family and of the people who we worship with.”

Like the many titles honoring the Blessed Mother’s attributes and apparitions, noted a video shown before the anniversary Mass, the Brush parish offers a unique reflection of Mary—one that echoes the virtues of those who comprise the congregation.

“This has become the symbol to the people on the plains and to the community of Brush of Jesus Christ and of Our Blessed Mother, the first of all the disciples,” Archbishop Aquila said in his homily.

Established in a white frame church at the corner of Eaton and Custer streets by Bishop Nicholas Matz on April 11, 1911, the original St. Mary’s was enlarged in 1939 and served the parish for 56 years. In 1966, land was offered to the parish with the stipulation that a new church and rectory be started within three months, which led to the current facilities. Archbishop Urban Vehr dedicated the church on June 19, 1967.

“We are grateful to God for all the people who came before us and dedicated their time, talent and service,” Father Ciesla told the Denver Catholic. “We are also grateful to those who are still answering God’s call, and we look forward to the future with faith, hope and love.”