His Church. Our Experience.
Subscribe
HomeLocalDreams, memories and prayer: Pope Francis on the vocation of grandparents and...
Local

Dreams, memories and prayer: Pope Francis on the vocation of grandparents and the elderly 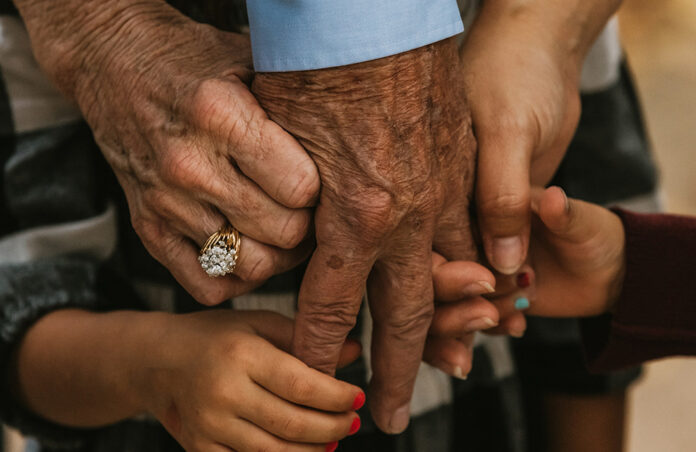 Quoting Jesus at the Ascension from the Gospel of Matthew, Pope Francis shared these words when he instituted the very first World Day for Grandparents and the Elderly, to be celebrated the fourth Sunday of July for its close proximity to the July 26 feast of Sts. Joachim and Anne, the grandparents of Jesus. This year, the celebration falls on Sunday, July 25.

The dignity of the elderly has been a theme of Pope Francis’ papacy since the beginning, and to encourage people to connect with their grandparents and the elderly in their lives, the Vatican is offering a plenary indulgence for the day “to the faithful who devote adequate time to actually or virtually visiting their elderly brothers and sisters in need or in difficulty.”

In other words, if you visit your grandparents for Sunday brunch, or even simply hop on a FaceTime or good old-fashioned phone call with them, you can get an indulgence.

While oft-unnoticed, grandparents and the elderly have a markedly vital vocation. In his message to them when decreeing this special day, the Pope reiterated this, as he has time and time again in various addresses he’s given over the years.

“It makes no difference how old you are, whether you still work or not, whether you are alone or have a family, whether you became a grandmother or grandfather at a young age or later, whether you are still independent or need assistance,” the Holy Father said. “There is no retirement age from the work of proclaiming the Gospel and handing down traditions to your grandchildren. You just need to set out and undertake something new.”

Grandparents indeed play a special role in each of our lives. There is often a humble and silent wisdom about them, in the way they tell stories of their youth, in the advice they freely offer, or even in the loving adoration and warm embrace of their grandchildren. Our grandparents lived through a time in which faith was just as essential as family, and many of them simply want one thing for their kids and grandkids: to share the same faith they do.

This presents quite a challenge in the apostolic age we live in. Our grandparents and elderly of today rightfully long for a time like the one they lived through, when faith and Christianity especially was foundational to society. Now, the remnants remain, but more and more are turning away from the faith of their grandparents.

This is precisely why grandparents and the elderly are so important. As Pope Francis, an elderly man himself at the age of 84, implored them: “What is our vocation today, at our age? To preserve our roots, to pass on the faith to the young and to care for the little ones. Never forget this.”

But how can grandparents best do this? Many lament their children and grandchildren not practicing the faith, and they feel helpless about what to do. This is where Jesus’ words come in: “I am with you always.”

“The Lord is always — always — close to us,” Pope Francis reassures them. “He is close to us with new possibilities, new ideas, new consolations, but always close to us. You know that the Lord is eternal; he never, ever goes into retirement.”

In December 2019, Pope Francis told the Italian National Association of Senior Workers, “The future — and this is not an exaggeration — will be in the dialogue between young and old. If grandparents do not dialogue with grandchildren, there will be no future.”

How is a better world than the one we currently live in envisioned? It is through the dreams of the previous generation passed on to the next. Hardships are a part of life, and the elderly have found ways to live through these hardships and overcome them, emerging on the other side stronger and more faithful than before. There is wisdom to be offered in their experiences, and it is the current generation’s responsibility and even duty to listen.

“Who, if not the young, can take the dreams of the elderly and make them come true,” Pope Francis said in his message for the World Day of Grandparents and the Elderly. Yet for this to happen, it is necessary that we continue to dream. Our dreams of justice, of peace, of solidarity can make it possible for our young people to have new visions; in this way, together, we can build the future.”

Grandparents love to tell stories, and it is through these stories that memories are kept alive. Pope Francis notes that more than just keeping the past alive, though, these stories are also a means to pass down lessons of wisdom to the next generation and remind families of their history and roots.

“Grandparents are like the wisdom of the family, they are the wisdom of a people,” the Holy Father said in 2013 during the Year of Faith. “A people that does not listen to grandparents is one that dies! Listen to your grandparents. Mary and Joseph are the family, sanctified by the presence of Jesus who is the fulfillment of all God’s promises. Like the Holy Family of Nazareth, every family is part of the history of a people; it cannot exist without the generations who have gone before it.”

Most important of all is prayer. Quoting his predecessor, Pope Francis said: “Pope Benedict, himself a saintly elderly person who continues to pray and work for the Church, once said, ‘the prayer of the elderly can protect the world, helping it perhaps more effectively than the frenetic activity of many others.’”

Despite the challenges of these times, perhaps it is an overlooked grace that we so readily have the intercession of grandparents and elderly who offer daily sacrifices at the Mass and pray fervently for their children and grandchildren. The Holy Father alluded to as much during his address at a Meeting with the Elderly in September 2014:

“In a special way, old age is a time of grace, in which the Lord renews his call to us: he calls us to safeguard and transmit the faith, he calls us to pray, especially to intercede; he calls us to be close to those in need…. The elderly, grandparents have the ability to understand the most difficult of situations: a great ability! And when they pray for these situations, their prayer is strong; it is powerful!”

The Lord has graciously provided grandparents and the elderly as quiet witnesses of faith and powerful intercessors for this generation. In our own journey of faith, We would do well to listen to their dreams, learn from their memories and heed closely the proclamation, as they do so well and tend to gently remind us as only grandparents can, that the Lord is always with us.