His Church. Our Experience.
Subscribe
HomeLocalDream soon a reality for Light of the World
Local

Dream soon a reality for Light of the World 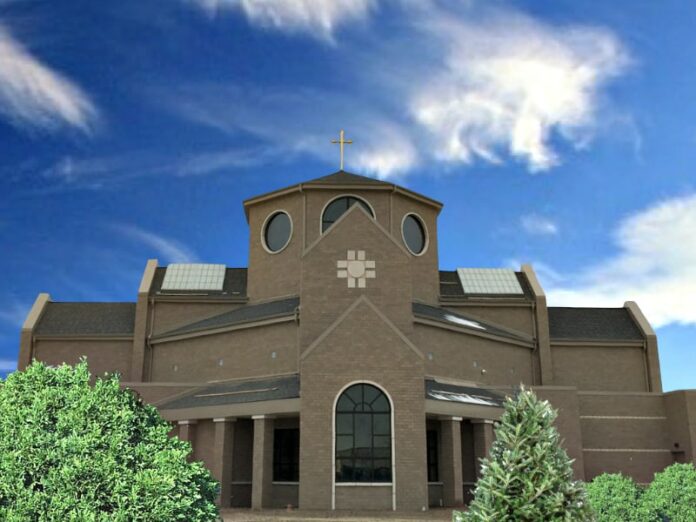 The build-up of anticipation among the Light of the World Parish community for the unveiling of their new church is so great that some are angling for a sneak peak.

Longtime and new members of the Littleton parish have been caught peeking in the new church windows and peppering insiders with questions about progress before the final reveal.

“The anticipation from the parishioners is electric,” said Kurt Connolly, a parishioner who helped oversee the design and construction. “(The pastor) wants everyone to walk in and have their jaw drop. It’s a great place. You’re going to be ‘wowed.’”

Next week, parishioners will see the fruits of their work in the new $6.7 million church adorned with chapels, stained glass, statues, a baptismal font and a golden tabernacle in more than twice the space previously used for Masses.

“I’m finding they can’t wait to get in,” said pastor Father Michael Pavlakovich. “For them it means finally having a place that they can be absolutely proud of and have ownership of because it’s from their blood, sweat and tears.”

The Light of the World community will celebrate its new church with Archbishop Samuel Aquila, who will lead a dedication ceremony Jan. 25.

For 36 years, the Littleton community has celebrated Mass without a church. When Father Pavlakovich arrived nine years ago, he decided to start a parish renewal focused on the Gospel and Catholic tradition.

“Every aspect of parish life was so directed that we focused in on the values of the Gospel and the traditions of the Catholic Church so as to better understand our identity as Catholics,” he said. “What flowed out of that is more people got attracted to the parish and more of the kinds of things we wanted to do.”

One of those things was to expand parish ministries. The parish of 3,000 households gave more than $100,000 to the needy, donated food, prepared more than 700 baskets for families at Thanksgiving and gave 1,000 gifts at Christmas, among others.

“In order to do that we knew we needed more space. (And) we needed to focus on a central place designated for worship. We needed to have a church,” Father Pavlakovich said.

Parishioners stepped up to make a new church a reality. In October 2009 the parish paid off its debt and in January 2010 started to raise funds for a church. Donations ranged from $100,000 to $5 a month—parishioners gave what they could to make their dreams a reality.

“We started the process for a three-year fundraiser and basically had half the money earlier than we anticipated,” he said.

Builders broke ground in January 2014. With the help of Connolly, owner of the project management company InLine Management in Golden, contractors and designers made a space that depicted Catholic values.

“We wanted to fulfill the parishioners’ desire to have a permanent dedicated worship space that’s worthy of the archdiocese and of Catholic doctrine,” he said.

Eidos Architects of Greenwood Village and Haselden Construction of Centennial blended contemporary architecture with a traditional octagonal sanctuary. The church is flooded with light from overhead skylights and stained glass windows of Christ—the Light of the World—and angels.

Painted Stations of the Cross line the church and extra space was made for praying in two devotional coves dedicated to the values of life and charity. Statues of Our Lady of Guadalupe, St. John Paul II, Blessed Mother Teresa and St. Anthony, St. Francis of Assisi and St. Katharine Drexel are displayed in the coves.

Space was also added for a choir, a cry room and extended narthex. The church can accommodate 1,400 faithful at a time up from 650 people in the multipurpose room, which will now be used for ministry work and social functions.

Father Pavlakovich credits the new church to the start of a perpetual adoration chapel and a dedication to Mary.

“Every time there’s been a Marian feast, something major has happened with this. It’s been amazing,” he said. “Either things like a big donation came in or something was completed or dates given for when (we could) move in.”

The parish is the first in 2015 to finish construction of a new church, and one of 24 in the last 20 years that was rebuilt or remodeled. The Archdiocese of Denver has 123 parishes.

Parishioners’ investment in the new worship space is a sign of growing faith, the pastor said: “When you build something to glorify the Lord, (it) seems to lift everybody.”