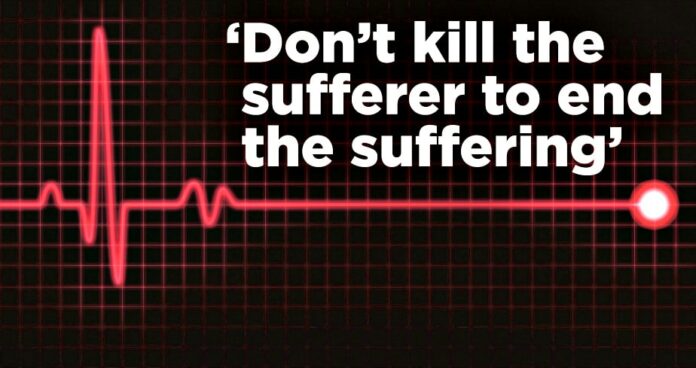 Some call it a dangerous affront to life and others “death with dignity,” but the debate over state legislation proposing physician-assisted suicide is drawing the voices of Coloradans from all backgrounds.

Doctors, attorneys, families and citizens spoke out about a bill debated at the state legislature last week that proposes a legal nod to an intentional death by drugs.

Legislators drafted House Bill 1135 under the guidance of Compassion & Choices, formerly the Hemlock Society, to allow terminally ill residents access to life-ending drugs if a doctor determines they are competent and two other doctors agree within six months of dying.

Some Coloradans are responding that the decision on when and how to draw a dying breath is not an isolated choice.

For physicians, explained Deacon Dr. Alan Rastrelli of Divine Mercy Supportive Care, the legislation puts them in an ethical dilemma.

“As opposed to protecting and restoring your health, (they’re) asking doctors to compromise their values, their ethics, their oath to do no harm so that it can be legitimized for the patient or their family,” said Deacon Rastrelli, who said he would testify against the bill. “You don’t kill the sufferer to end the suffering. That’s not what health care is about.”

The Hippocratic Oath historically taken by doctors is a binding statement to treat patients to the best of their ability and to not prescribe lethal drugs. The bill would further blur the line between illegal overdosing that could cost physicians their license and physician-prescribed overdosing.

In response to the proposed legislation, the Archdiocese of Denver sent an urgent email to pastors and parishes asking that a pulpit announcement be read at Masses Jan. 31-Feb. 1 to raise awareness and encourage parishioners to contact their state representatives.

“A law allowing physician-assisted suicide would further entrench a culture of death in our laws here in Colorado, demean the lives of vulnerable patients—exposing them to exploitation—and corrupt the medical profession, whose ethical code calls on physicians to serve life and never to kill,” the email read.

Legalized suicide has been debated beyond the medical community. After Oregon passed assisted suicide laws called “death with dignity” by proponents in 1994, three others states—Washington, Montana and Vermont—passed laws permitting it. Last year, a New Mexico judge ruled to protect physicians who help patients die.

The legal system may also be compromised by the proposed bill, according to attorneys.

In “Suicide by Doctor: What Colorado Would Risk on the Slippery Slope of Physician-Assisted Suicide,” the attorneys stated, “in recent years, physician-assisted suicide has been repackaged and promoted to the American public as ‘Death with Dignity.’ However, physician-assisted suicide is anything but dignified and amounts to eugenics for the infirm, but with the government’s stamp of approval.”

Decker told the Denver Catholic that for centuries the legal system has been designed to protect and preserve life.

“I think it’s important to keep in mind with this bill that this is basically an effort to legislatively override Western civilization to preserve and protect human life,” she said. “The role of the state is to protect its most vulnerable citizens, not to provide poison pills. It makes the state agents of death and not the protector of life. It’s such a significant and dramatic departure from our entire legal history.”

A departure from this fundamental purpose of laws could create ethical dilemmas for attorneys as well, she said, who may advise terminal ill patients and their families.

The bill also raises ethical dilemmas and moral questions for families who may be caring for an ill relative.

According to a Pew Research Center survey in Oct. 2014, nearly 50 percent say they disapprove of physician-assisted suicide, but 62 percent say that suicide is morally acceptable for people who are in great pain with no hope of improvement.

Opponents to physician-assisted suicide also say the bill would impact individual citizens’ ideas on the value of life and true meaning of death with dignity.

After the national story on Brittany Maynard’s physician-assisted suicide Nov. 1, Deacon Rastrelli responded that her family’s support of her hastened death is not the true picture of compassion.

“To me, providing a natural death with dignity means that you provide them intensive care all the way through,” he said. “I think it’s undignified to say, ‘The remaining days so your life are not valuable enough for me.’ Compassion is to engage in their difficulties with them, not to inflict more suffering or to prolong it, but to let them know you are hurting and I will give you comfort by my presence and care.” -Millions of uninsured would be branded an economic liability if diagnosed with an illness.
-Prejudices on the value of life could lead society to encourage death for the disabled or ill.
-When pain and depression is addressed, talk of suicide abates.
-The U.S. Supreme Court urged in 1997 to uphold laws against assisted suicide because physicians could not control it.

Preparing for the hour of death

Your life in God’s hands